No major redesigns for this year, but if the bikes ain't broke.....
by dave atkinson

Cervelo aren't a company to rest on their laurels, but nor are they one to meddle with proven performers for the sake of it. The 2010 line-up of Cervelo bikes bears a striking resemblance to 2009's range – there are no major changes for this year, though of course you'll get a natty new paint job. All the bikes will be available as frame and fork only in the UK, as distributors Madison think that most people willing to shell out up to three and a half grand for a frameset will have fairly fixed ideas about what they want to hang off it. Anyway, here's the range... Cervélo claim to be the 'inventors of the aero road bike' and certainly they've been doing it for a while. It's a growing market and the S3, one of Cervélo's flagship bikes, is right up there in the higher echelons. What do you get for your £3,499? Well, 'the lightest aero bike frame in the world', according to Cervélo, and at a claimed weight of less than a kilo it certainly doesn't unduly trouble the scales. Airfoil sections designed 'for bike speeds' are used throughout the bike, with the razor-thin stays providing a bit of give at the rear. We've got one in on test at the moment, albeit in its 2009 colours, so look out for a review very soon. The S2, the next generation of the Soloist Carbon, is still available too, at a slightly less eye-watering £1,999. Probably the machine with the highest hype-to-appearance ratio, we saw the P4 extensively on show stands last year but very rarely on the tarmac: we're not sure how many actually got made in 2009, but it's back for 2010 and, like before, it's an extraordinary machine. Cervélo's P3 has scored more high-level TT wins than any other frame and the P4 draws on that experience but takes the aero development even further. The front wheel scoop has been dropped from the down tube (Cervélo claim it has no effect) and there's the familiar upright seat tube from the P3. The rear brake and the water bottle are both integrated into the frame, and cable routing is almost completely internal. There's a custom Cervélo fork too. All that R&D will take its toll on your wallet; the P4, like the S3, is £3,499 for the frame and fork. Cervélo are still making the P3 too – that'll set you back £2,999 – and the P2 is a bargain-bucket £1,499 which sounds like a steal considering its palmarès. A penny under three grand gets you the frame that Carlos Sastre piloted to victory in the 2008 Tour de France, and it's hard to argue with that kind of kudos. "We don’t like to talk about weights, as many other manufacturers have made a mockery of it with outlandish claims", say Cervélo. "If weight is important to you, ignore claimed weights, and weigh the frames and see how light the R3-SL is compared to its competitors in the real world." Fighting talk indeed: what we do know is that when we tested the R3-SL kitted with Dura Ace 7900, it tipped the scales at a feathery 14.9lb - light enough? The R3-SL uses Cervélo's Squoval down tube and a massively oversived bottom bracket for superb stiffness for its weight. The slightly beefier R3 is a two-time Paris-Roubaix winner, which speaks for the frame's comfort as well as its performance. 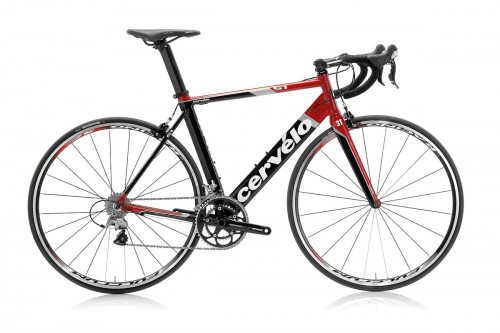 Not everything at Cervelo towers is made from Carbon. The S1, which sneaks under the £1,000 mark, is an aluminium areo frame with a proven race history: victories in the Paris-Nice, the Critérium International, Liège-Bastogne-Liège and the Tour de l’Avénir back up Cervélo's claim that a good Aluminium bike can be a better chocie than a mediocre Carbon one. You get similar aero features to the more expensive siblings, with slippery tube profiling, two-position seatpin and internal cable routing, but the use of aluminium keeps the asking price much lower.