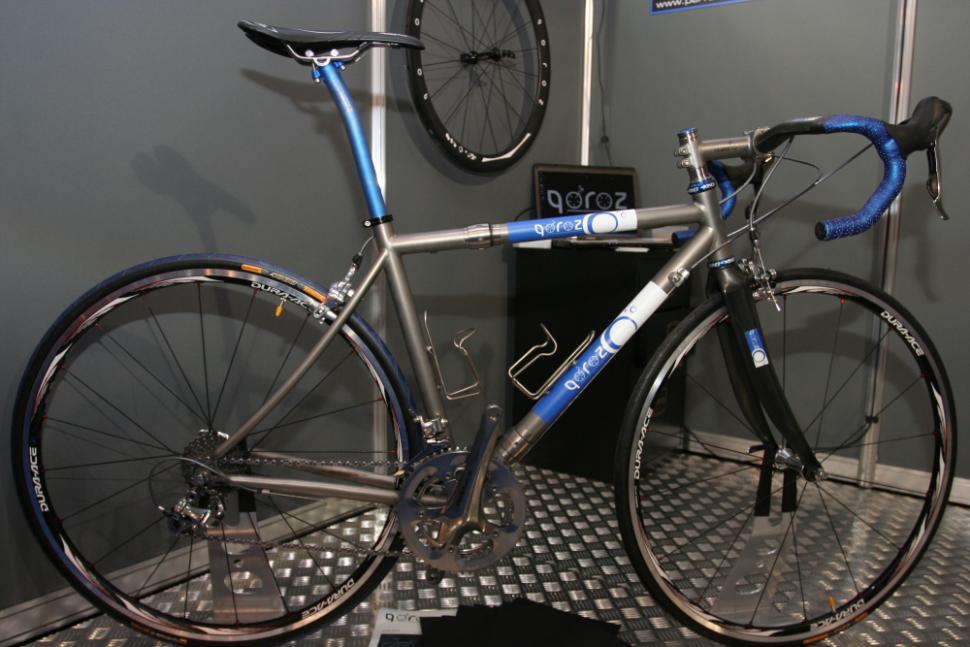 Carbon may be cool, but titanium still seems to be what we dream of. That's borne out by the early voting in this week's road.cc poll – and by the number of titanium bikes at Cycle 08 including a new British company, qoroz. qoroz is the brainchild of Marcus Eales a precicion engineer with a passion for cycling. Sounds like the standard recipe for a US high end titanium company. The original US Ti bike builders were often engineer lead outfits and nearly all were spawned by the aerospace industry. The guys who built the bikes also built planes, missiles, satellites and the like – some of them still do. qoroz aren't in the right place to tap in to weapons grade welding so their approach is to hand build their bikes in the Far East with a rigourous regime of quality control – they actually have somone in the factory. They certainly sound pretty uncompromising on their website… “If you’re expecting pictures of artisans soldering frames before inspecting them with vernier callipers and height gauges, we're afraid our product isn’t for you. “ While there is a place for these craftsmen, we don’t believe they should be putting together aeroplanes we fly in, or bikes we ride on (well I'm probably with them on the aeroplanes, but I think they might be in for an argument on the bikes). qoroz is the result of a passion for bikes and the experience of the aerospace and metrology [measuring stuff, well I didn't know…] industries. When you’re used to inspecting turbine blades for jet engines on machines that measure to microns, you don’t expect to have to fettle bikes together, they should fit precisely. Steering axis should intersect frame centrelines precisely, wheels should track perfectly.” These boys aren't interested in building bikes that look fast, they're only interested in building bikes that go fast. And as the website blurb suggests the emphasis is very much on applied science rather than art. The road bikes on show were prototypes they've been testing throughout the 2008 season (you can buy one from Performance Cycles) – 2009 production bikes will be along by the end of the year with some minor tweaks. So what about the bikes? The three road bikes in their range are made from 3AL 2.5V tubing, and all feature a striking blue anodised seatpost (their mountain bike gets the same treatment too). Six standard sizes are available from XS through to XL and custom options will be available too, although qoroz stress that most people should find a standard bike to fit, and they will be putting a big emphasis on fitting customers properly when the bikes go on sale. The Race Won is, as the name suggests is their race machine. Complete bikes will be available with a full Dura Ace drivetrain, Dura Ace wheels with Conti GP400 tyres, Pro Vibe 7S bars, and Fizik Arione saddle. Seatpost and stem are qoroz own brand titanium. The fork is likely to be a high end Taiwanese model with qoroz badge. The seat post is to qoroz's own design and has an ovalised profile. Claimed weight is 7.87kg (17.35lb) for the medium. 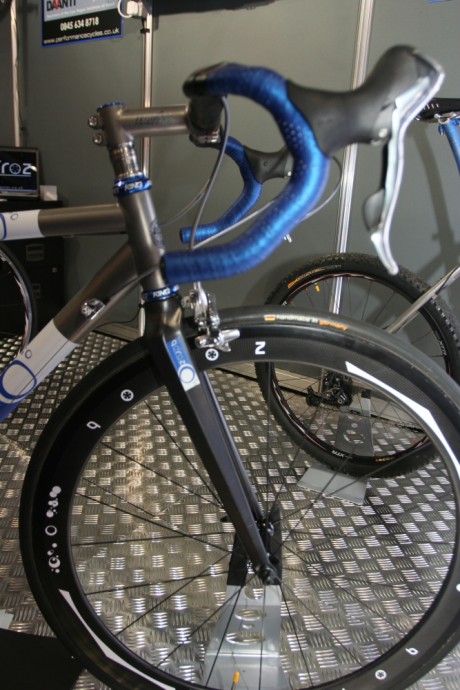 Interestingly the geometry for the off the peg is the same across all the model sizes: 75° for the seat angle and 73° for the head which would seem to give a shortish effective top tube – if you like a stretched out position you might need to either go up a size or fit a longer stem. Keeping the geometry the same for all sizes does have the advantage of giving standardised handling characteristics across the range. Where qoroz are looking to introduce some useful variations between sizes is in the wall thicknesses of the tubing used. 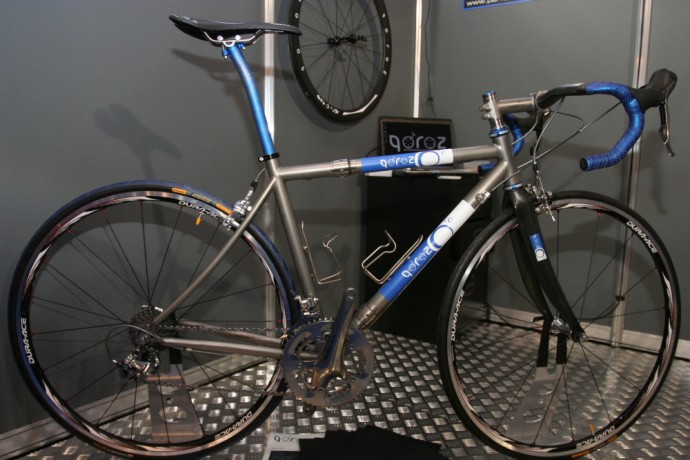 The Road Won is a more of a sportive all-day riding bike. The complete bike component spec is the same as the Race Won and the claimed weight for a medium is 7.92kg (17.46lb). 2009 production models with come with mudguard clearances and eyelets. There is also the option of having S&S couplings fitted as standard (for an extra charge). Again geometry is the same across all sizes, in this case a more relaxed parallel 73° for the head and seat angles. These bikes though, have a longer effective top tube than the race model which seems like a reversal of the standard approach to these things. 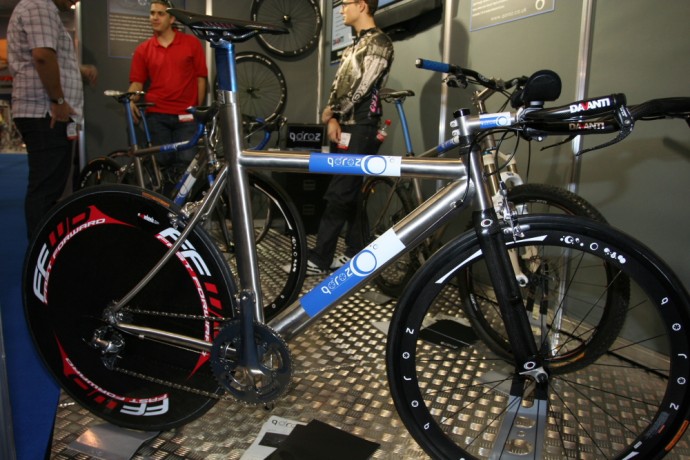 The Time Won is, you've guessed the time trial/triathlon bike in the range and the current bike is a pure prototype although qoroz hope to have a production model available by next Spring. Initial impressions are that as it this is much more of a triathlon bike than a time trialler with a very steep 82° seat angle putting the rider right over the bottom bracket, in fact you could argue that it is pretty steep by current tri bike standards too. Qoroz point out that geometry may change as a result of their testing process. 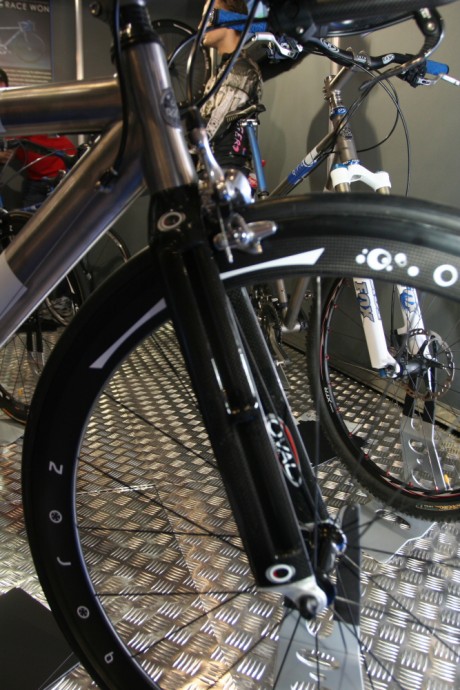 Again, build kit on the complete bikes is full Dura Ace with a deep section qoroz branded wheelset which includes a carbon rear disc wheel too. Ooh and you get a very tasty Oval Aero fork. No weights on this baby but the complete bike price is £4750. All the bikes will also be available as framesets with fork, Chris King headset, and Ti seatpost – prices are likely to be around the £1500 mark probably slightly less for the mountain bike and a fair bit more for the TT/Tri bike. For more on qoroz check out their website www.qoroz.co.uk