Everyone loves a shiny new toy, right? Certainly we've been looking forward to having a go on Garmin's new Edge 810 GPS unit. It promises to be a step up from the previous range-topper, the Edge 800, with Bluetooth connectivity for live tracking, instant uploading, weather updates and more.

So, what's new? Well, the standout feature is the Bluetooth. There's a Garmin Connect app available for both iPhone and Android, and you can pair your 810 with your phone.

And why would you want to do that? Well, there's a few reasons. Firstly, the smartphone connection means that you only ever have to plug your Edge in when the battery needs charging. Logging rides on Garmin Connect happens automatically; as soon as you save a ride it gets pushed over to the portal. If you've beaten any of your presonal records, it'll let you know straight away. On the iPhone app you can drag stuff the other way too: courses created on the Garmin Connect website can be loaded into the unit. That functionality isn't there on the Android app yet, but it's coming.

And it's pretty straightforward to set up too. Here's a vid we made showing the connection process straight out of the box.

You can use that constant data connection for other stuff too. If your other half worries about you on long rides, or you're doing a charity event or sportive and you want people to see how you're getting on, you can turn on live tracking. You can invite people (via email, or post on facebook or twitter) to your live event and they can watch you flying round the course in real time. Obviously the tracking is still dependent on your having a phone signal, so it you've venturing into the less-covered areas of the UK then updates might be a bit patchy.

Another thing that gets piped in via the data feed is live weather updates. Press the power button once and you can get three hours' worth of local forecasts and any pertinent weather warnings nearby. Obviously all the things that were good about the Edge 800 are still there on the 810. It's fully map capable: ours came bundled with Ordnance Survey 1:50,000 mapping of the whole country, which means you get great maps for on- and off-road riding. If you're only riding on the road there's a bundle with city maps and European road maps too. The Edge 810 can give you turn-by-turn directions on any course that you upload and follow on the device. There's five customisable data screens; out of the box you can set the Edge 810 to race or train mode and have different setups for both, and you can set up other profiles for different activity types with the relevant screens enabled. You can race against a virtual partner or race against yourself on a previously recorded activity, see your altitude profile, connect ANT+ sensors for heart rate, cadence, speed and power, set up profiles for each of your bikes… all sorts of stuff. Global Cycling Network have made this vid of the 810 and 510 which is worth a watch for a quick features rundown. 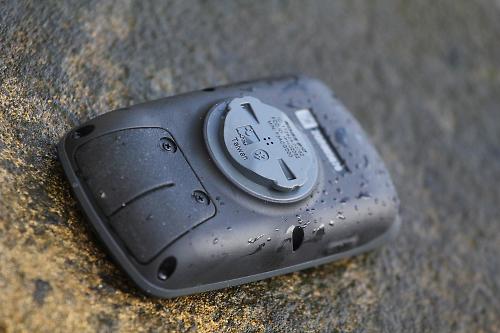 Physically the 810 has had a cosmetic update over the 800 but it's the same physical size,  with the same 160x240 pixel resistive LCD touch screen that'll work without you having to take your gloves off. That's not hi-res compared to smartphones these days, but the low power consumption of the screen is one of the things that keeps the battery life of the Edge 810 nice and healthy, and that's one of the major benefits over a smartphone; Garmin claim it'll run for 17 hours on one charge. It's rated as IPX7 water resistant so the lovely British weather shouldn't be an issue. 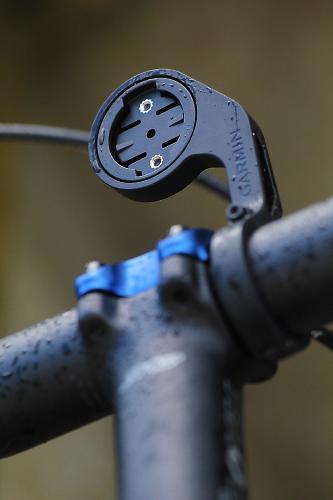 The 810 range starts at £379.99 for the basic unit with no maps included, and the all-inclusive Ultimate Performance pack (OS maps, City maps, European road maps, speed/cadence sensor and HRM) is £514.99. We got an OutFront mount with ours which puts the GPS in a very nice position just in front of the stem. Once we've given it a thorough going-over we'll be posting our review, so stay tuned...