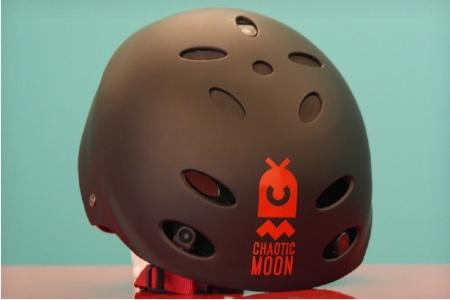 Here at road.cc we're scratching our heads as to whether we think this would work.

It's a helmet containing seven cameras, that only activates at the moment of impact, giving a complete 360 degree view of the situation for the purposes of gathering as much evidence as possible.

It's fittingly named the 'Helmet of Justice', made by the US skate company Chaotic Moon.

Photos can be seen here, courtesy of Digital Trends.

It's clearly a great idea if you're hit by a hit-and-run driver, which seems increasingly common these days, but even if the camera manages to catch a numberplate speeding off into the distance, it's not clear whether that would be enough evidence to prove it was the car that hit you.

We can't help thinking it might be more useful if it was filming all the time, rather than just after the impact.

It's still only a prototype, which Chaotic Moon say cost around 300 dollars to create, and they're looking into adding features like GPS tracking - which could send emergency services directly to your location following a collision.

What is clear is that more and more cyclists are using bike or helmet mounted cameras to protect themselves and help identify dangerous drivers.

In Janauary we reported on another, camera the Cerevellum Hindsight 30 - brainchild of US designer Evan Solida - a rear pointing camera with an integral LED light with a bar mounted monitor that records footage on a continuous 10 second loop to capture video footage of incidents in which cyclists are hit from behind - by far the most dangerous form of collision if you're riding a bike. From closer to home we've got a RoadHawk Bullet Cam - which like the Hindsight 30 records on a continuous loop and comes with a variety of mounts allowing you to point it either forwards or back.

Whether the the Helmet of Justice is the first step in taking such technology to the next level or not, cameras and camera technology are going to become an increasinly commen piece of equipment or all road users..