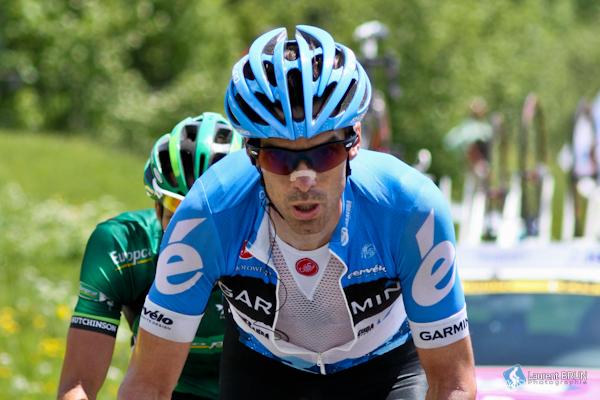 Garmin-Sharp rider and reformed doper David Millar has sprung to the defence of Tour de France leader Chris Froome (Team Sky) after Froome was asked questions about doping when he took the race lead Saturday.

After Saturday’s stage where he set the third-fastest time ever on the climb of Ax 3 Domaines, Froome was asked to confirm that his win was clean.

“100 per cent,” he said. “I think it’s normal that people ask questions in cycling given the history of the sport.”

Team Garmin-Sharp captain David Millar, who served a suspension in 2004 for doping and has since become a passionate advocate for clean cycling, later took to Twitter in support of Froome and Team Sky.

“Team Sky rode a perfect race, and for the record, I believe they are clean and deserve respect and admiration for it,” said Millar. “I don’t think they deserve to have mud thrown at them when they work so hard to do it right. It doesn’t seem fair.”

At Saturday’s post-race pres conference, Froome said: “I know the sport has changed. There’s absolutely no way I’d be able to get these results if the sport had not changed.

“For me it is a bit of a personal mission to show that the sport has changed. I certainly know that the results I get are not going to be stripped 10, 20 years down the line. That’s not going to happen.

“Anyone who actually spends a bit of time with the team, with us... see that this is months and months of preparation - going to these training camps in altitude all together, the support off the bike from the sport staff, from my fiancée, this is so much preparation that it’s not ‘wow’, it does add up.”

Froome’s fiancée Michelle Cound took to Twitter in support of her man: “Could I stand by, claiming how proud I am, supporting & cheering Chris all the way if there was even a possibility he was doping?  Hell no!”

Millar expanded his defence of Froome and Sky before Sunday’s stage. “We as a team at Garmin have been flag bearers for clean cycling,” he said. “We want to try to prove to the public and media that it is possible to perform at the biggest races clean. We love the sport so I will occasionally step in and defend someone who I think is being treated unfairly. Chris has dedicated his life to racing, he does everything right but Sky perhaps don’t defend themselves as well as they could. So I stepped in and did it.”

Team Sky looked far less superhuman on Sunday, and team manager Sir David Brailsford took the opportunity to defend his riders. “That's what we keep trying to tell everybody. People don't want to believe it. Maybe they will after today. The bigger picture may not be such a bad thing.”

Brailsford has been criticised for not publishing his rider’s power data. He told VeloNews that there was no point releasing data few people can interpret. “There is so much pseudoscience out there right now. If you release the data, there are very few people who can properly interpret and understand that data. All you’re going to do is create is a lot of noise for people who are pseudoscientists. You can even write magazines about it. They’re so wide of the mark in what they’re doing, it’s quite scary. You can do anything with stats. You can use that with a cynical view.”

“If we had their numbers, we would be copying their training files and we'd know what to do to beat them," Millar said. "It's better for them to remain slightly enigmatic. If you have a recipe which obviously works, why would give away that recipe?

“I think transparency, as regards numbers, is very debatable. We’re a competitive, professional sport. It’s one thing satisfying the sceptics but at the same time you have to be professional, wanting to win races. It’s a tightrope Sky are walking, trying to be transparent but also keeping their training secrets.”