Last week we looked at the Gary Fisher 2010 road range that Trek are launching in the UK, now it's time to look at Trek's own bikes. Not all of Trek's vast range of bikes make it over to the UK but 2010 will see an expanded road range with the headline grabbing launch of the new Madone 6 series and the return of bikes aimed at sportive and leisure riding roadies – a new version of the Pilot; and the Portland, a bike aimed commuters who want a truly versatile machine.

Star of the show though had to be the new 6 Series Madone. We saw it at Eurobike, but Trek's UK launch gave us the chance to get an up close and personal look at it and to get the inside track on what makes this bike so special – apart that is from winning the Tour de France straight out of the box. Those who have ridden it the new 6 series rate it highly and of course it helped two riders to podium places on this year's Tour. Mind you, Lance Armstrong has always maintained that "It's not about the bike" (although he was very complimentary about this one) and Contador won the race so convincingly that it's hard to imagine he would have failed whatever he had been riding.

The bike the 6 Series replaces at the top of the Trek tree (now the 5 Series) is itself only two years old and was, when launched, a completely new bike from the Madone it replaced. Given the fact that Trek reckon the new 6 series went through 70 design revisions the new bike must already have been in the pipeline before the old 6 series was launched.

There are four models in the new series – the 6.9 and the 6.5 – and two womens' versions, the 6.9WSD and 6.5WSD. As last year, both 5 and 6 series Madones are available as Pro or Performance fit options - the latter having a taller head tube for a slightly more upright stance on the bike. Geometry and hand position on the both remain the same "Madone – it's all about the geometry" must be tattooed inside the eyelids of all Trek's marketing guys. So should you ever bump into one at a social function and have an awkward silence to fill, "What's the Madone all about then?" is a handy ice breaker.

So apart from the geometry, what is the new Madone all about and what makes it so special? Well, only riding it will tell us how special it is. While we're waiting for our test sample let's talk about what makes it different from last year's 6 series.

For a start say Trek it's lighter – they've shaved 100g from the fuselage – frame, fork, and seatmast – while at the same time making it stiffer, and yes, you've guessed it: more vertically compliant. The front end, which now boasts what Trek reckon is the world's first asymmetric fork, is 17 per cent stiffer than the bike it replaces - less lateral flex should make for more confident handling, that's also the thinking behind the even stiffer Gary Fisher Cronus. Asymmetric fork? Don't worry: the asymmetry is front to back rather than right to left – the front section of the steerer is ovalised so that there is more surface area to dissipate loads and shocks where the fork has to deal with them most. 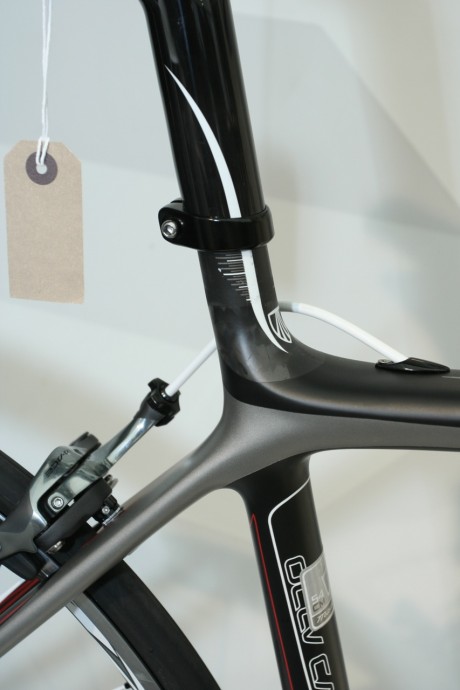 Trek also say that the ride is now 43 per cent more compliant – it's worth remembering that Madone's have never been beat you up sort of bikes, so on paper at least the new version should be a fantastic all-day riding bike for more than just road-hardened pros. A fair whack of that extra cush comes courtesy of a re-designed seat mast which also kicks in 20g of those weight savings. Most of the rest, say Trek, is down to the improved damping characteristics of that asymmetric fork.

The frame's extra stiffness is partly down to completely re-designed tube profiles. Trek looked at the load paths of streses going through their frame and tweaked the carbon layup accordingly, that is why they could make the frame lighter and stiffer too. Plus, their new OCLV2 process uses less resin – which took out most of the 100g saving over the old model.

The other big contributor to the frame's extra stiffness is the BB90 bottom bracket, Trek aren't going down the BB30 route, and no, the "90" doesn't refer to the hole diameter, but to the width of the BB shell which is almost a third wider than a standard 68mm bottom bracket. Trek say this makes for an ultra-stiff pedalling platform, it's pretty light too because they've done away with the normal aluminium bottom bracket cups: instead the bearing surfaces are moulded out of carbon – not as simple as it sounds. Aside from the performance benefits of being lighter and stiffer than before the new 6 series also boasts some other nice touches. It's fully Di2 compatible with an integrated Di2 battery mount and Di2 specific internal cable routing too. Integration is the other big theme of this bike and it doesn't end with Di2. The new 6 series frames also have a DuoTrap integrated sensor option: you can spec the bike with an in-built ANT+ sensor which will work with any ANT+ compatible computer from the likes of Garmin, Cateye, Power Tap and lots of other manufacturers. Neat, in every sense of the word. Another nice touch is the way the rear derailleur cable exits straight out of the back of the chainstay for what Trek describe as "nearly optimal" shifting performance… hmm which seems to be under selling it a bit, unless they're going to change it on the next one to makes things fully optimal. Before we finish talking about the Madone, the other big thing we should mention about it is that all Madone series 5 and 6 models are available as Project 1 bikes, this means that from a whole array of spec, colour and fit options you can customs design the perfect bike for you and then your local Trek dealer orders it in for you. This sort of customisation has been one of the emerging trends with higher end bikes over the last couple of years, Pinarello and Ridley both offer customisation options too that extend to a wide choice of colours and set ups - it is something we could really see catching on in a much bigger way too. 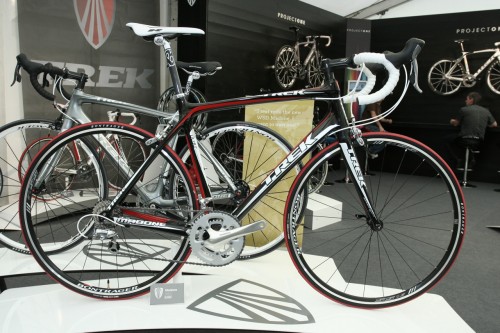 Not all the bikes in the Madone range are made from Trek's OCLV 2 carbon process, the 4 series Madones are made in a very large factory in Taiwan – but feature the same Madone geometry though (remember, Madones are all about the geometry) and that geometry is racy, but comfortable – one reason that for years Trek never felt the need to build a high end sportive bike. The Madone 4s come in three flavours: the 4.2 sporting a Shimano 105 drivetrain; the 4.5 tricked out with Ultegra; and the top of the line 4.7 decked out in Dura Ace 7900. At £2100, the 4.7 looks a bit of a bargain too 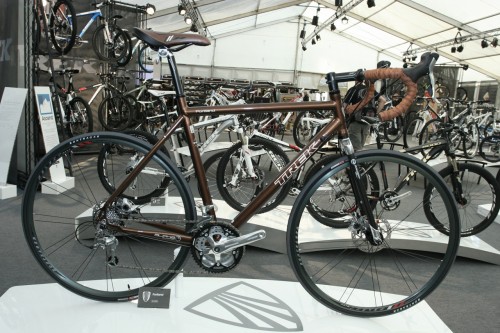 An old favourite that has dipped in and out of Trek's UK range in recent years, in many way this is a bike that was ahead of its time: and adaptable high end bike (tourer, commuter, crosser, sportive bike) based on a cyclo cross platform, but with road tyres and a performance edge. The position is upgright and comfortable and as you'd expect you can fit racks and mudguards. oh, and it's got disc brakes too. Trek may not do a high end sportive bike, but for 2010 they will be doing a mid-range one, the Trek Pilot. These are a new range of bikes for 2010, and they are very much aimed at the British market. Trek first launched a Pilot range of semi compact high end carbon road bikes back in 2005 - the joke was that they waited until Lance was retiired before bringing out a range of "girls bikes". The orginal Pilots were well thought of machines aimed much more at those wanting performance bikes that majored on comfort – Trek will hate me for saying it, but something like the Specialized Roubaix – the difference being that the Madone in all its incarnations has been such a good all day riding bike that there was no need for a top end sportive bike in the range. No surprise that the Pilot never sold and was quietly dropped.

Now it's back, but this time in aluminium (and at a lower price point where there is a gap in the range). It put me strongly in mind of the Giant Defy – think Defy with smoother welds and a slightly different arrangement of the back end where the seat stays meet the seat tube and I reckon you wouldn't be far wrong. In fact that does actually sound like the recipe for a pretty good bike. 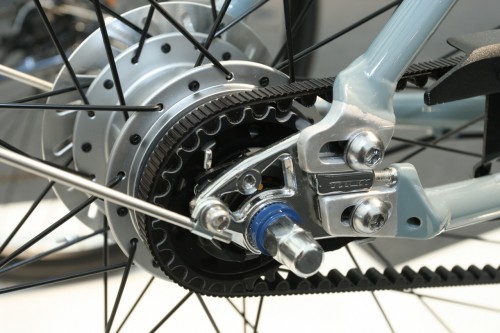 Big news at Eurobike last year was the Gates Carbon belt drive, which pretty much everyone was hailing as the new dawn of transmission. It never really materialised though: for all the demo bikes we saw on the stands we never actually got out hands on a production bike with the belt on: there were various issues, including the sprockets and the tensioning and frame-splitting systems.

This year the belts were back though, and the teething troubles seem to have been ironed out: we talked to plenty of manufacturers who were very confident of getting the bikes in the shops very soon. Trek were showing a couple of bikes with the belt drive, one of which was the new Soho 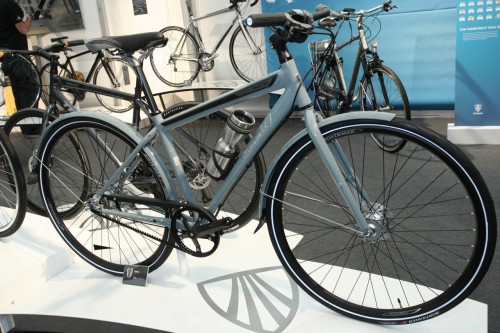 The Soho ticks a lot of boxes for both style and practicality. The belt drive is much less messy, say Trek, than a chain, and there's a nicely minimal chain guard to kepp your trousers out of harm's way. The Alu frame has rubber inserts on the top tube so you can lean it against walls without scratching it, and the colour-coded full mudguards will be welcomed by rain-savvy UK commuters. Nexave hub brakes and an Alfine hub gear add to the practicality. The singlespeed District comes in three flavours for 2010. Top of the range is the belt-driven, orange-rimmed beauty above. It uses a similar removeable dropout to the Soho which allows you to fit the belt. Once it's in there's a screw which pushes against a stop to get the (considerable) tension needed for the belt to work properly. 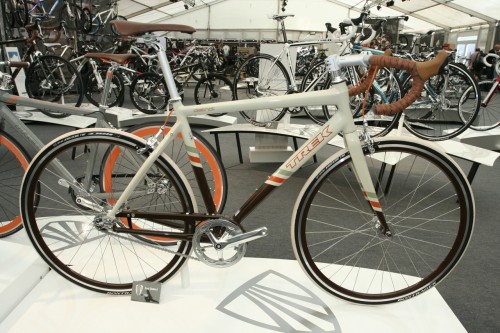 The other two Districts use the same frame but a standard chain drive to keep the cost down a bit. The 2nd District is an exercise in brown, whereas the 3rd District is a more pimpy white, blue and gold affair.