The latest bike to arrive at road.cc for testing is the £4,909 Storck Fenomalist… and here it is in all its glory. This is a first for road.cc. We’ve interviewed Markus Storck before and we’ve reviewed a few items of Storck clothing, but this is the first Storck bike we’ve had in for review.

Markus Storck started the company in Germany back in 1995 and since then has designed and produced the first ever full-carbon fork (I didn’t know that before) and the first carbon cranks (nor that).

In some ways, Storck is an archetypal German brand in that it plays up the precision engineering angle... and why not? The bikes are designed with performance in mind and you can be sure that no feature is added just because it looks cool. Storck are keen on phrases like ‘form follows function’ and like to talk a lot about strength-to-weight ratios. Sound engineering is what they’re all about. The Fenomalist is designed to be a high-performance bike. Storck say that, “It’s characterized by best handling and outstanding performance, stiffness where required, yet comfortable too,” so that should give you some idea where they’re coming from.
This is the second generation Fenomalist model, with a PressFit bottom bracket and compatibility with both mechanical and electronic shift systems, so you get full internal cable routing. We have a Shimano Ultegra Di2 groupset on our test model; we’ll give you more build details in a mo. Everything is carbon right down to the dropouts. One of the features that Storck are keen to shout about with all their bikes is the proportional tubing. The Fenomalist is available in six sizes from 47cm up to 63cm and the stiffness-to-weight ratios are designed to be the same across the lot. This is expensive in terms of tooling, moulding and laying up the frames, but the idea is that the bikes will perform the same no matter what size you’re on. We have the 55cm model here that comes with an effective top tube of 564mm and a 139mm head tube. The stack is 545mm and the reach is 403mm. That sounds like a race-focused set-up. We’ll be interested to find out how our reviewer Stu gets on with it. The fork is Storck’s own Stiletto 300, made from unidirectional carbon fibre and, as we said earlier, the groupset is Shimano’s Ultegra Di2 with an internal battery. The wheels are Mavic’s Ksyrium SLRs, the lightest Ksyriums ever at a claimed 1,410g the pair, with an Exalith 2 treatment for improved braking. The alloy stem and carbon bar are Storck’s own, as is the carbon seatpost, while the saddle is a Prologo Nago Evo in Storck livery.

In this build (without pedals), the Fenomalist hit the road.cc Scales of Truth at 7.0kg on the button. That’s 15.4lb. Storck recently  announced a new distribution partner in this country, Storck Raddar UK Ltd, who will be supplying 30–40 specialist bricks and mortar shops (as opposed to online stores) around the UK. All new dealers are required to offer every Storck customer a full bike fitting service. 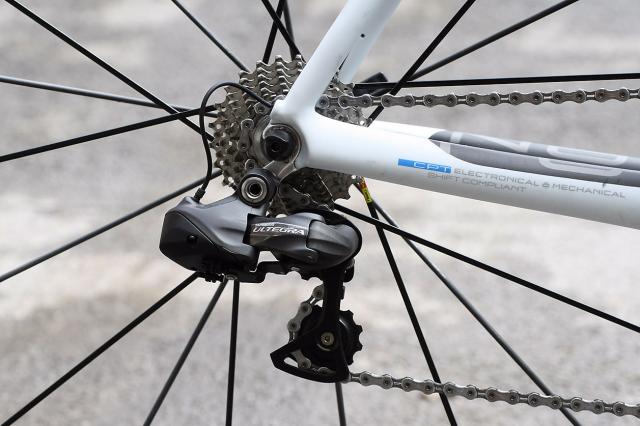 Along with the new distribution arrangements, there’s a new website: www.storck-bicycle.cc. It was still just a holding page last time we checked but it’s due to go live any time now. For details on Storck’s clothing, by the way, go to www.storckcyclinggear.co.uk.

Right, that’s yer lot for now. Stu’s wheeling the Fenomalist out the door to get the miles in. He’ll be back with his findings soon.