It’s by far the fastest non-UCI time trial/triathlon bike ever developed, according to Felt
by Mat Brett

Felt have released a completely new triathlon/non-UCI time trial bike in the IA that they claim to be comfortably the fastest ever bike of its kind. They say that the bike’s total drag is actually just a little more than that of a set of wheels.

The biggest reason for the aerodynamic efficiency of the IA, which stands for Integrated Aero, is that they’ve ignored the UCI’s rules which stipulate, for example, a maximum tube profile depth to width ratio of 3:1, and a maximum tube depth of 80mm. With a shrouded external steerer tube, the head tube area on the IA has a depth to width ratio that’s a colossal 11:1! Having ditched the UCI’s rules, Felt have really cut loose here. Jim Felt, founder of Felt Bicycles, told UK Felt dealers this week that the company’s engineers worked on numerous tube shapes using CFD (computational fluid dynamics) and in the wind tunnel, with all the tube shapes optimized for the angle of the particular frame part. Felt even got rid of the seatstays entirely at one stage during the development process in order to reduce the frontal area. The issue there, though, was that they had to make the chainstays so tall as a result that the bike lost lots of its overall aero performance at high yaw angles. That’s why, in the end, the IA has what Felt call Cloak Seatstays that meet the seat tube very low – something else that isn’t permitted by UCI rules – reducing the frontal area by nearly 50% compared to conventional seatstays.

Another benefit of mounting the seatstays so low, Felt say, is that it improves ride comfort by inducing a leaf-spring effect. The smaller rear triangle also increases lateral stiffness. 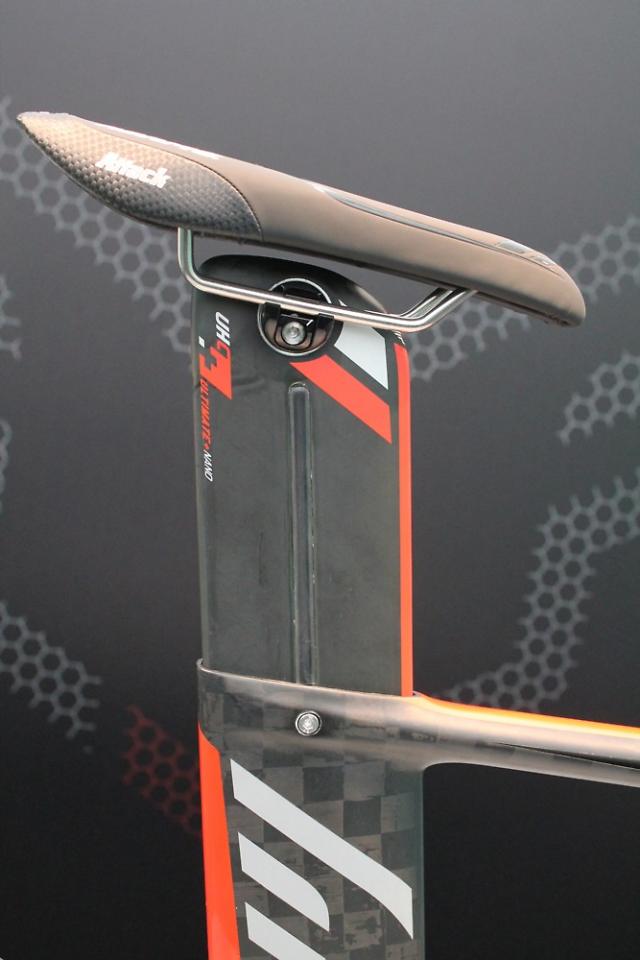 Felt use a similar Internaloc-clamped seatpost to the one found on their newly redesigned AR aero road bike but in a much deeper profile. It’s super-slim and the internal clamping mechanism makes for clean airflow around that area of the frame. The other benefit of their new clamping system, Felt say, is that it allows them to keep the walls of the seatpost very thin in order to provide shock absorption and a reduction in vibration. Felt have even come up with a new braking system, developed concurrently with the frame. It’s a centre-pull design, a central slider moving up when you draw on the brake lever, moving the brake arms towards the wheel rim. It works with any levers and any wheels – the latter being particularly important as aero wheels have got wider recently and are likely to get wider still. The front and rear brakes are the same design, the rear one being positioned behind the bottom bracket. Both are shrouded to reduce the drag… naturally! All that gubbins towards the front of the top tube, behind the integrated stem, is what Felt call the AeroPac Cover. The cover is silicone and there’s a big hollow underneath there – the CalPac – that you can use for squirreling away your energy gels, Mars Bars, cheese (I don’t know what you take riding) and so on. Taping gels to the frame or even slinging them into your pockets can have a negative effect on aerodynamics, so this looks like a good use of that space. According to Jim Felt, there’s a possibility that Felt will look into using that space inside the frame for other storage purposes in the future. As well as working out how to reduce drag as much as possible, Felt reckon they’ve worked hard to make airfoil sections that produce more lift that traditional airfoil shapes. Lift? In some airflow conditions, most tube sections of the IA will generate lift, like a sail, to counteract drag. At higher yaw angles (the apparent wind angle produced by the actual wind and the movement of the bike), the lift exceeds the drag so you get negative drag.

Surely, though, the IA must be a nightmare in a crosswind. When it blows from the flanks, with all that frame area you’re just going to topple over, or at least get blown right off course. Felt say not. They say that the IA is actually very stable in crosswinds… but we’ve not actually ridden this bike so we have no idea. It’s not heavy either. Made from TeXtreme carbon fibre, the IA’s frame weighs 1,220g. 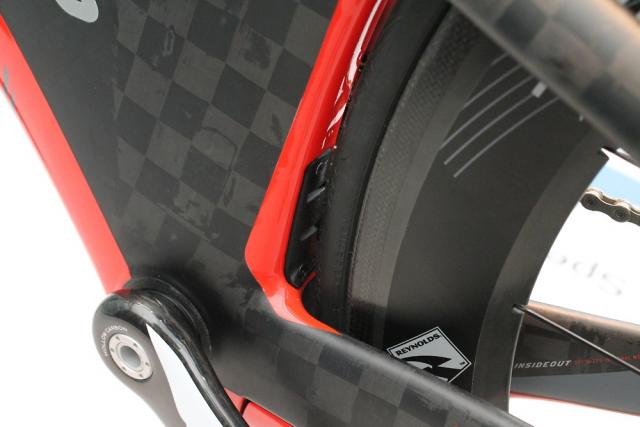 So how slippery is the IA, exactly? For what it’s worth, Felt say that the complete bike has less than 350g of drag (although that really doesn’t mean a lot other than sounding impressive. And let’s not get into the rights and wrongs of using grams as a unit of measurement here).

In slightly more understandable terms, Felt say that wind tunnel testing shows that their sponsored triathlete Mirinda Carfrae will save more than 12:30mins over the Ironman Hawaii course in typical conditions by switching from her old Felt DA to the new IA. An Ironman bike leg is 112 miles, so she’ll be making an average saving of over a minute for every 10 miles, in theory. The complete IA as shown, with a Shimano Dura Ace Di2 electronic groupset and Felt TTR1 wheels made by Reynolds, will set you back £7,999. It’ll also be available as a frame module. If you’re not in a market for a bike at that price, keep your fingers crossed that some of the technology will trickle down over future years.