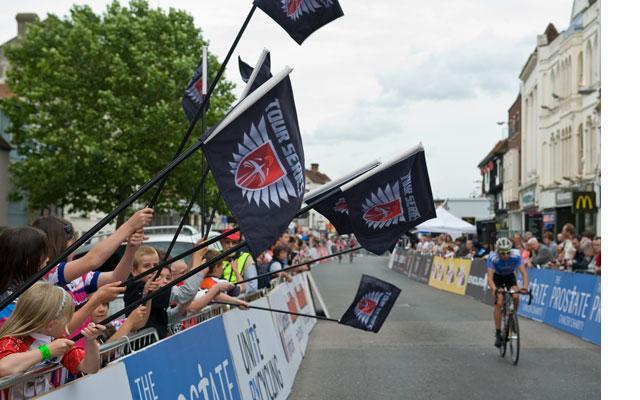 Organisers keen to hold stage in the town
by Kevin Emery

With attendances in excess of 100,000 and national TV coverage reaching an estimated 40 million people, The Tour Series was hailed a resounding success by organisers, venues and racing teams. And for the race venues themselves it meant a boost for their economy and increased participation in cycling.

But Tewkesbury could miss out on such benefits unless another £20,000 in funding can be found, according to the Borough Council. The council is working with Tour Series organisers to try to bring the prestigious event to the town.

Event organisers said that the fact Tewkesbury is a cycling town and it’s involved in the Government-backed Healthy Towns' initiative were behind the decision to visit and they want the race to take place on June 1 but have asked for £60,000 to cover their costs.

The council has reportedly promised to provide £20,000 and the Healthy Towns' Count Me In! initiative has agreed to give another £20,000. That leaves £20,000 to be found from other sources.

Councillor Phil Taylor, the council's portfolio holder for economic development and promotion, said on the this is Gloucestershie website: "I hope we get this final chunk of funding – the event won't go ahead without it.

"It will put Tewkesbury on the map. There will be national publicity and it will bring so many visitors to the borough. It won't just be about the professional cycling either as there will be a huge range of activities for the community.

"They include a whole range of events for children, opportunities for local teams to compete, fun events for all the family, opportunities to meet elite athletes and bicycle demonstrations and workshops. Local cycling clubs and individuals are already offering their support.

The Tour Series began last year and selected 10 towns and cities in the UK to host the event, which started in May and finished in June, and the line up contained the UK’s best elite cycling teams and some of the top road and track racing talent in the UK. The Series was won by Team Halfords BikeHut.

The 10 towns and cities involved were Milton Keynes, Exeter, Woking, Peterborough, Blackpool, Southport, Stoke, Colchester, Chester and Southend. The event's promoters aim to tour in four more locations next year to make the event bigger and better and have chosen Tewkesbury as one of them.

Those selected last year saw the benefits of the event. Following round nine in Chester, which attracted an estimated 12,000 people as spectators, officials believe the crowds boosted the city's economy by around £500,000.

And in Exeter the Cycling Demonstration Town Project Team saw an unprecedented interest in all elements of cycling in the two months since The Tour Series, and bike shops in the city saw a surge in interest, with Sidwells Cycles reporting it had recorded the busiest ever day in its 12 year history when the tour

All partner venues ran school cycling activities on the day of their Tour Series round, engaging thousands of children with the positive benefits of cycling on both their health and the environment.