Record numbers of riders turned out for the first race of the 2009 Scottish Cross Series at Plean Country Park on Sunday, of which road.cc was a sponsor, with 115 riders in the open race and over 50 kids in the U12’s event!

Last year’s tweaks to the course were well received by riders and made a great cross course even better. With this in mind the organisers  Stirling Bike Club, applied the old adage – ‘if it aint broke, why fix it’, and ran with the same course. Lots of quick rolling dirt road, sweet flowing singletrack sections, a tough leg stinging run up and a couple of short, steep descents made for close, exciting racing across all categories.

In stark contrast to last year’s race where riders were subjected to sub zero temperatures, icicle beards and a frozen, super sketchy race course, this year the weather gods were in better fettle providing the attended masses with blue skies and sunshine with only a little bite in the air. As a result the course held up well with little mud to be seen.

Youths, 11am
16 Youth riders took to the start for the first race of the day (30mins plus 1 lap of racing). By the end of lap 1 Stuart Mcluskey, Tom Arnstein and Scott Lindsay were locked together out front, 25 seconds up on Callum Chirnside and Kyle Yates chasing hard behind with Louise Borthwick a further 50 seconds back, closely followed by Sean Noon and first year Youth rider, Rory Mellis.

The leading trio stayed together through much of lap 2 before Scott Lindsay moved to the front opening up a small gap on Mcluskey and Arnstein. From here Lindsay powered away stretching his lead all the way to the finish to comfortably take the win. Mcluskey took 2nd with Arnstein 3rd. Louise Borthwick rode a great race to take the Youth girls win and also 6th place overall. Bravo! 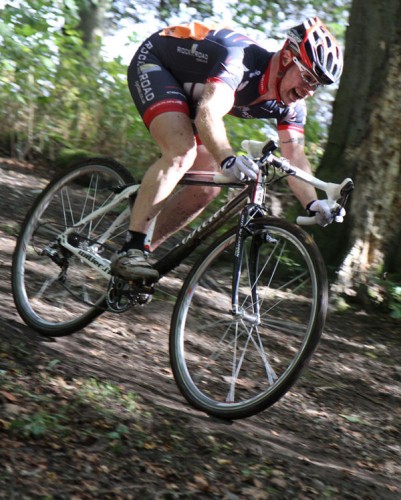 Open Race – Senior Men/Women/Vets/Juniors, 12.30pm
The start line was buzzing for main race of the day with a massive 115 riders ready to do battle. A super quick start soon had the field strung out and by the end of the first lap it was junior Kenta Gallagher (fresh from racing at the MTB XC Worlds for GB) alone out front, with Craig Hardie and James Fraser-Moodie in hot pursuit 5 seconds down, followed closely by a larger group including Davie Lines, Gary Macrae, Paul McInally, Paul Newnham and Bruce McLeary.

Gallagher continued to ride hard at the front, stretching his lead to 10 seconds over Fraser-Moodie and Hardie by the start of Lap 3. Disaster struck next lap though as a puncture, run to the pits and wheel change dropped Gallagher several places. Fraser-Moodie took over the lead and looking strong started to stretch out a gap over Hardie in 2nd, with a charging McInally close behind in 3rd, Macrae in 4th, Gallagher chasing back hard in 5th and Lines close behind in 6th.

Over the closing laps Fraser-Moodie continued to extend his lead out front riding on to take the win in convincing style. Behind McInally bridged up to and then rode away from Hardie to claim 2nd spot. Hardie dug in well for 3rd to hold off Gallagher in 4th and first Junior. A great ride from Newnham moved him up to 5th at the finish ahead of McLeary in 6th.

Gary Macrae took the win the Vets race (and 7th overall) ahead of last year’s overall series champion Iain Nimmo in 2nd and Steve Nicholson close behind in 3rd.

In the Womens race, Ruth Fraser-Moodie took the win in fine style, leading from start to finish. Behind Maddy Robinson rode strongly to take 2nd spot ahead of Brenda Callander in 3rd. Lewis Kirkwood, fresh off a great mtb season took 2nd in the junior men, with Andrew Leith rounding out the podium.

U12’s races
The IslaBikes U12s race also had a record entry with a huge field of 54 children lining up at the start for 15mins plus a lap of racing over a 700m course. Add in a big crowd, lots of cowbells and cheering and it felt just like a mini World Champs!

From the gun Jamie Willoughby was quickest away leading the field down the fast/start finish straight into a tough 50m climb with short steps to negotiate. Willoughby was able to ride up this whilst behind many had to jump off and run up. Most impressively, several of the kids had their dismounts for this hill dialled, whilst others were able to make impressive attempts at riding the whole thing!

By lap 3 Emma Borthwick had closed the gap on Willoughby to just 7 seconds with Erica Allen and U10 rider Cameron Mellis close behind. By the bell though Willoughby, thanks in part to some fine passing manoeuvres had stretched his lead back up to 30 seconds and was able to celebrate his U12’s win in style with some sweet air over a bump just before the finish line! Emma Borthwick took a great 2nd place with Erica Allen 3rd. Cameron Mellis took the win in the U10’s from Joshua Graham in 2nd and Murray McNeish close by in 3rd. George Southby led home the U8’s from Abbie Stewart and Murray Fotheringham.

Big smiles and some fine finishing celebrations suggested the kids all enjoyed the racing as much if not more than the spectators!

Prize Giving
With the chuck wagon doing a roaring trade, riders, spectators and officials gathered together at the start/finish area for the prize presentations. First up were the U12’s, each receiving a medal and a goody bag for their efforts as well as the top three in each age category receiving additional prizes prizes and a trip to the podium.

Additional prizes across all categories were kindly provided by race sponsors  Rock and Road Cycles, Asda and Wheels Cycle Centre.

Race Pics
Trina Ritchie and others were on hand to capture the action from around the course – lots of great images are at: www.flickr.com/groups/scottishcyclocross/pool/

Next Up – Round 2, Auchentoshan

The series takes a weekend off before returning on Sun 18th October for Rd 2 of the Series at Auchentoshan, Glasgow. Held on an absolutely amazing woodland/parkland course with usually a little mud thrown in, it’s one not too miss!