Enigma's new Evoke, seen here at the recent Cycle Show, is a titanium disc-equipped road bike that is the latest entrant into the rapidly expanding road disc market, and one of the nicest looking too.

Handmade in the UK from 3Al /2.5V titanium, its oversized dimensions include a 44mm down tube and 35mm top tube, it has been designed to be a fast and comfortable road bike, not for racing but for long distance cycling, and benefits from disc brakes. Like the down tube, the head tube has an external diameter of 44mm with a 1 1/2in lower fork race and 1 1/8in at the top. As you'd expect, that head tube is designed to impart front end stiffness. 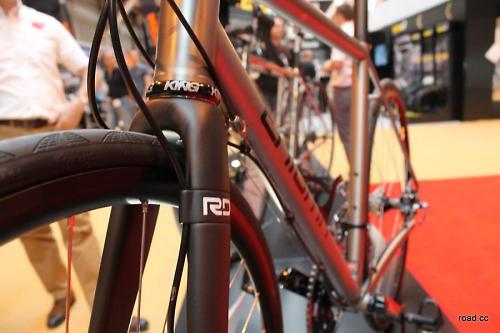 Enigma has been doing discs on touring bikes for a while, this is their first attempt at a regular road bike with discs. Dealing with the extra braking force of discs holds no fears when it comes to the Evoke. As Engima's Mark Reilly says, the frame is pretty stiff already - hopefully without sacrificing the ride quality that makes titanium so popular. 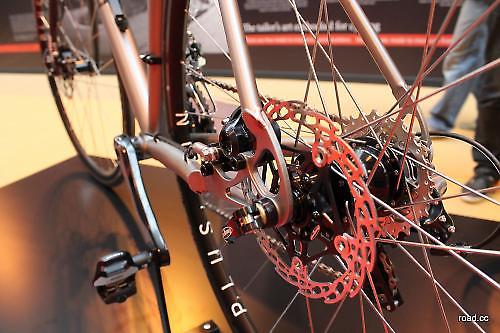 The dropouts are sourced from Paragon Machineworks in the US, a disc-specific dropout, obviously, that places the calliper inboard of the frame. There's a real split between this approach or mounting the calliper outboard of the frame, on the seatstays. Enigma say this approach places less stress on the seatstay, relying on the chainstay, already oversized, to deal with the extra forces generated by the discs. 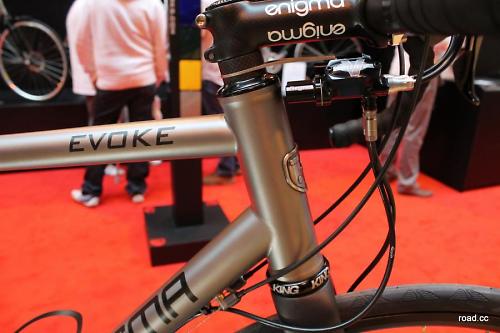 We first saw the Evoke at Bespoked Bristol where it was running a Shimano mechanical disc brake setup, while at the Cycle Show it was fitted with Hope mountain bike disc brakes, using Hope's V-Twin converter, placed under the stem. Hydraulic disc brakes from SRAM and Shimano are slow coming to the market so it might be a while before there's enough stock for smaller manufacturers such as Enigma to get their hands on those groupsets.

The Evoke will be available as either a complete bike (price to be confirmed) or as frame only option for £1,999.99. 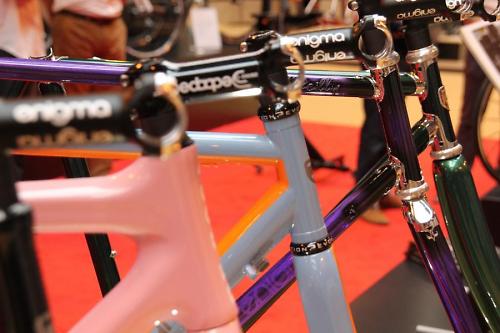 Enigma recently opened Paintworks, their own frame spraying facility that they're offering to everyone, not just Enigma frame buyers. Prices start from £200 for a single colour spray and rise incrementally depending on the complexity you want. These frames demonstrate some of the myriad of combinations and options.