The Department for Transport has released its report on road casualties for the second quarter of 2013 (PDF). Compared to the same period in 2012 the total number of cyclist casualties including deaths and serious injuries (KSIs) are up. There’s better news in the year-on-year comparison which shows a slight drop .

The figures for cycling go against the grain of the picture for all road casualtes continues the downward trend of the last few decades. In the year ending June 2013, 1,730 people were killed on the UK’s roads, a 3 per cent drop from 1,785 in the year ending June 2012. The number of people killed or seriously injured fell to 23,530, a 5 per cent decrease compared with the year to June 2012. Motor vehicle traffic rose 0,4 percent in the period.

Commenting on the figures Sustrans’ Policy Director, Jason Torrance, said: “Its welcome news that fewer drivers are dying our roads but for our most vulnerable road users the situation is treacherous and getting worse, with the numbers of cyclist casualties increasing by 12 per cent in just three months this year.

“The widening gap between the safety of motorists and cyclists must serve as a wake up call to government - our roads must be a safe regardless of how you choose to travel and to achieve that we urgently need slower speeds, improved driver training and more dedicated space for cycling.”

Commenting on the figures for the Institute of Advanced Motorists (IAM), IAM director of policy and research Neil Greig said: “Once again the latest casualty figures show the increasing risks for vulnerable cyclists and motorcyclists.

"Spring and summer will always be the most dangerous months for those on two wheels but that must not be allowed to obscure the need to focus on their safety.

"Investment in segregated cycling facilities must keep pace with the rising demand for cycling.  Road designs that help car drivers can often be fatal for motorcyclists so engineers must learn to 'think bike' when they build barriers, signposts and new surfaces.”

The DfT cautions against putting too much weight on data from one quarter, and you can get a false picture by just comparing one year with the last. However, the report does compare equivalent quarters between years.

It says: “Between April and June 2013, 450 people were killed in reported road accidents, 12 per cent more than in the same period for 2012. Serious and slightly injured casualties fell by 3 and 8 per cent respectively. These figures resulted in an overall decrease in casualties of 7 per cent.”

After many years of increasing cyclist KSIs there’s a glimmer of good news for us in the report too. KSI casualties for cyclists showed an overall decrease of 1 per cent compared with the year ending June 2012, and a tiny decrease in overall casualties.

Pointing out that there was also an increase in motorcyclist KSIs and in minor injuries to both two-wheeled groups, while pedestrian casualties fell, the DfT points the finger of blame at that great British bête noire, the weather.

The report says: “It is likely that these increases were at least partly due to the large change in weather conditions between the second quarters of 2012 and 20131. The overall UK mean rainfall between April and June 2012 was extremely high compared with the long term average for this period. In comparison with this, the UK mean rainfall level between April and June 2013 was 40 per cent lower, returning to the long term average. It is therefore likely that the markedly drier weather in 2013 would have increased the number of vulnerable road users (particularly motorcyclists and pedal cyclists) on the road, relative to the same period in 2012, thus increasing their relative exposure to accidents.

However, there were also more motor vehicles on the roads in Q2 of 2013 than Q2 of 2012, which might also explain the increase in cyclist casualties. “Provisional estimates also show an increase of 3.4 per cent in road traffic levels,” says the report.

The DfT doesn’t have quarterly estimates of the amount of cycle traffic and one significant weakness of the data is that there’s no indication of the length of cycle journeys being undertaken, so it’s not possible to take exposure time into account.

Nevertheless, it’s disturbing that while the casualty rate of ever other type of road user continues to decline, the KSI rate for cyclists has barely improved. That’s not as bad as it getting worse, as it has for every year since 2005, but this graph from the report shows the situation starkly: car driver and passenger KSIs have halved since 2004 while cyclist KSIs have increased. 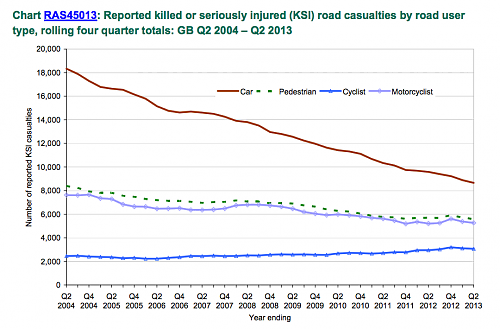 The report, complete with data tables for stats nerds, is available from the Department for Transport.