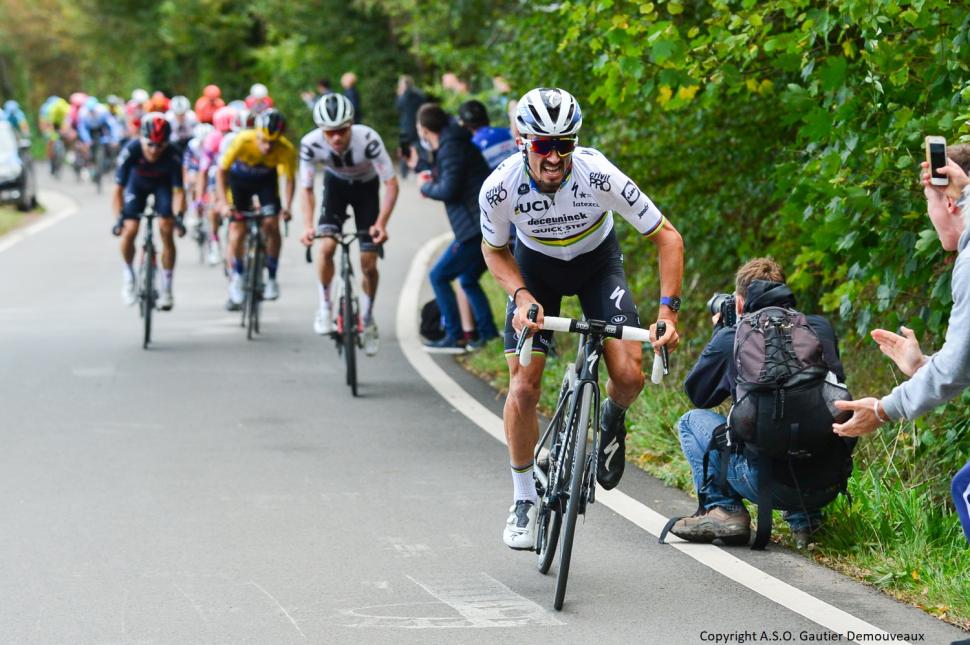 Julian Alaphilippe’s return to racing has been cut short after the world champion tested positive for COVID-19.

Less than 48 hours previously, the 30 year old had won Saturday’s opening stage of the Tour de Wallonie on familiar terrain – the Mur de Huy, where he has triumphed three times in the Flèche Wallonne.

Four days after finishing fourth in that race in April, the Deceuninck-Quick Step had a horrific crash at Liège-Bastogne- Liège, going down an embankment and hitting a tree, causing him to sustain two broken ribs, a fractured scapula and a collapsed lung.

Finishing this Wednesday, the Tour de Wallonnie was Alaphilippe’s first race with his team since his crash at Liège-Bastogne- Liège, with his only appearance in the intervening period being the French national road championships last month, where he finished 13th.

His positive test for coronavirus casts doubt on whether he will be fit to ride Saturday’s Clasica San Sebastian, reports Eurosport.

Along with Mark Cavendish, Alaphilippe missed out on a place in the Belgian team’s line-up for the Tour de France, with sports director Tom Steels saying that the “difficult decision” had been taken “to give him more time to recover and build back his condition, so that he can be at 100 per cent.”

Most of his rivals during Ardennes Week may have been otherwise occupied when he won on the Mur de Huy on Saturday, but his performance there demonstrates that his recovery was on track, and Alaphilippe himself was delighted with it.

“I’m really happy,” he said after the stage. “I was very excited this morning at the thought of being back with the guys in a competition again after our training camp in Livigno, I had a lot of motivation knowing I would finally resume racing and was very confident, because I had a strong team around me, and together we prepared a solid plan for today.

“I’m delighted that I had the legs to finish the day in the most beautiful way possible. The Mur de Huy is always a difficult finish and it’s never easy to win here, you feel the pain with every metre,” he added.

“The fact that I lead the general classification is a bonus, but I just want to take it day by day and focus on every stage before thinking of the overall. I am just happy to have tasted victory again after a long time.”