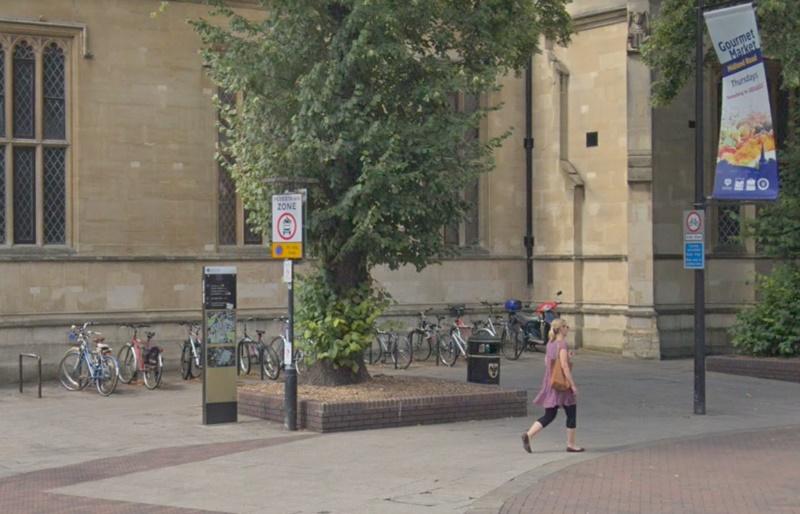 A ban on cycling in the centre of Bedford is set to remain in force after the town’s deputy mayor ignored the results of a consultation in which most respondents wanted it removed.

Some 54 per cent of the 574 respondents said they opposed the ban, while just 43 per cent were in favour of in the consultation held by Bedford Borough Council, which is controlled by the Liberal Democrats and Labour, with 15 and 11 seats respectively plus the support of one independent councillor.

But The Bedford Independent reports that the town’s deputy mayor, Councillor Charles Royden, has recommended that the council’s executive keep the ban in force for a further three years when its executive meets next Wednesday.

The Liberal Democrat councillor claimed that local business are “overwhelmingly in favour of keeping the ban.”

But Green Councillor Lucy Bywater, whose ward includes the area of the town centre subject to the Public Spaces Protection Order under which riding bikes is banned, accused the deputy mayor of throwing cyclists “under the bus.”

“His party claims to be one of ‘democrats’,” she said. “What’s worse is that in the section on ‘Risk Implications’, the report totally ignores the increased risks to cyclists of being forced to cycle on adjoining roads (mainly ‘A’ roads and all public transport routes).

“It really feels like both democracy and cyclists are being thrown under the bus by the deputy mayor.”

Highlighting that the previous time a consultation was run, “public support” was highlighted as a key reason for retaining it, she added: “It is completely clear there isn’t public support for the ban now.”

A spokesperson for the council said: “A decision has not yet been made on this PSPO extension, it will be discussed at the Executive meeting next week.

“With an overwhelming majority of local businesses and Bedfordshire Police in favour of retaining this ban on cycling, the report recommends that a PSPO continues to be in place prohibiting cycling between 9am and 6pm in the pedestrianised area of the town centre, alongside other measures around e-scooters and skateboards.

“This means people can continue to use this area of town to commute to and from work in those traditional peak periods, but it makes the pedestrianised area of town safer during the main shopping day.”

Local resident and traffic safety specialist Kate Carpenter told the Bedford Independent that the deputy mayor’s recommendation was undemocratic, discriminatory – including against people with disabilities who use cycles as a mobility aid – and not based on evidence.

“Overall this decision is appalling in my view and utterly disrespectful to the people of Bedford and detrimental to safety, accessibility and public health,” she said, describing it as “a very depressing decision by a short-sighted and ill-informed  authority.”

At a council meeting yesterday evening, Councillor Royden attempted to defend his decision as Green Councillor Ben Foley attacked his recommendation, saying there was no evidence supporting keeping the ban in place, especially given the consultation result.

Councillor Foley asked: “My question, which I guess is to the deputy mayor, is what evidence is there that, one, without the ban it would be unsafe, and two, that having the ban actually makes a difference, given that civil enforcement officers don’t have the power to stop reckless cyclists who refuse to stop.”

The deputy mayor replied: “I think cycling on pavements is a real hazard, that's why it’s unlawful in Highways Act, and I think that’s why it’s important that we've got a Traffic Regulation Order in the town centre.

“Albeit for the fact that actually we loosened it to allow commuters to cycle before 9 and after 6. I think it's really important that the Traffic Regulation Order prevents people from cycling in pedestrianised areas and pavements, because it causes accidents.”

He added: “I think it's crazy to talk about wanting to allow bicycles on pavements and pedestrianised areas, I think it’s crackers, I think it’s bad and we shouldn't be encouraging people to break the law.”

“You know perfectly well what the difference is, you’re trying to obfuscate there.”

Specifically asking the deputy mayor, “How many people have been involved in crashes in that area, and over what time period? Is there that evidence?” Councillor Royden said, “You know I think I’m getting a bit fed up with Green Party councillors coming to this council meeting with spurious statements.

“And now you come along here and you're telling me there's no evidence that businesses want the cycles to be stopped from cycling on the pedestrianised areas, it’s in the report.”

In response, the Councillor Foley said: I’m astounded by the chutzpah of councillor Royden thereby claiming that I am the one that's distracting from the issue, he’s the one that didn’t answer my question.

“But still, regardless of that there are no injuries, there is no safety case for this ban.

“There might be other reasons for it and councillor Royden might wish to distract my questions around the number of people that responded to the consultation.

Cycling UK has campaigned against PSPOs, which it says have the effect of criminalising cycling when they are used to enforce bans against people riding bikes in specific areas.

Previously, the charity’s head of advocacy and campaigns Duncan Dollimore. Has said: “Some councils have used PSPOs as a geographically defined version of an ASBO to restrict the use of public space and criminalise behaviour not normally regarded as illegal.”