London has today been named the world’s most congested city and, according to much of the media, cycle lanes are to blame – something the charity Cycling UK describes as an “incredibly simplistic” conclusion.

The 2021 Global Traffic Scorecard from traffic data specialists Inrix sees London jump from sixth to first place as the city in which motorists lost the most time stuck in traffic jams last year, replacing Colombia’s capital, Bogota, in the top spot.

Drivers in London lost 148 hours in traffic jams last year, down just 1 per cent from pre-COVID levels. In second place was Paris – a city where authorities have been far more proactive in putting emergency bike lanes in place and restricting motor traffic than the British capital has – on 140 hours, a 25 hour improvement. And in both cases, average last-mile motor vehicle speed actually improved by 10 per cent.

Here are the global top 10 most congested cities in 2020, according to the Inrix Global Traffic Scorecard. A number of news outlets in the UK have seized upon a comment by Inrix operations director Peter Lees that cycle lanes installed in response to the COVID-19 crisis have brought about a “negative impact on congestion”.

He said: “Use of roads is all about supply and demand. If the demand goes up but the road space is being shared with other forms of transport, there’s less tarmac effectively for the cars to be on, which then has an impact on the speeds on the road and therefore congestion.”

However, Lees himself said that the principal reason for London taking the top spot was simply that it had recovered from the pandemic more quickly than other cities around the world (although that ignores other factors such as decreased use of public transport with many switching to cars, and a boom in van deliveries).

“One might argue it’s a good thing that the congestion is there because it’s showing that the economic recovery has been particularly quick, but the downside to that means congestion has returned,” he explained.

In fact, of the five most congested traffic corridors named in the capital by the Inrix survey, only one has seen any significant cycling infrastructure put in during the pandemic – the A501 eastbound from Edgware Road to Old Street Roundabout, and even then, only for the Euston Road section of the route.

That infrastructure was put in place under Mayor Sadiq Khan’s Streetspace for London programme, with the other high-profile temporary cycle lane in the centre of the capital, on Park Lane, not making the top five – nor indeed did Chiswick High Road, home to Cycleway 9 opened in December last year and which has faced bitter opposition from a vocal minority.

That mirrors road.cc analysis of findings in previous Inrix reports – pre-pandemic, for example, no road on which major cycling infrastructure had been built featured among the most congested in London in 2018.

And a report published earlier this year by Imperial College London found that “special London cycle lanes, which aim to boost commuting by bicycle, do not negatively impact traffic speed.”

Indeed, researchers found that while Cycle Superhighways “somewhat reduced traffic flow – the number of vehicles passing by in a certain time frame – they improved traffic speed, meaning overall there was little impact on congestion.”

Lead author of the study Dr Prajamitra Bhuyan of the Department of Mathematics at Imperial, said: “Estimating the effect of the cycle superhighways on congestion has been difficult, as there are many factors at play and the highways themselves were not planned randomly – they have been placed in areas plagued with congestion.

“Our method provides evidence that Cycle Superhighways can be an effective intervention in metropolitan cities like London, which are heavily affected by congestion. We hope the method can also assist in effective decision making to improve the performance of the traffic and cycling network in cities.”

Here’s what London Walking & Cycling Commissioner Will Norman had to say about the report published today.

Let’s be absolutely clear – decades of credible research shows that cycling & public transport are key to reducing traffic & pollution in cities. That’s why we’re continuing to invest in a high quality cycle network, enabling millions of green & clean journeys around the capital.

Duncan Dollimore of the charity Cycling UK said: “It’s incredibly simplistic for Inrix to suggest that the use of road is all about supply and demand, without considering how efficiently that road space is used.

A protected cycleway was installed in 2016. pic.twitter.com/yO3PDCaRGH

He continued: “Inrix are focused on the tarmac available for cars, when the question should be how we use and allocate that space better, changing travel behaviours and reducing congestion in the process.

Here are the top 10 most congested towns and cities in the UK 2020, according to the Inrix Global Traffic Scorecard. And here are the most congested road traffic corridors in London and in the rest of the UK. 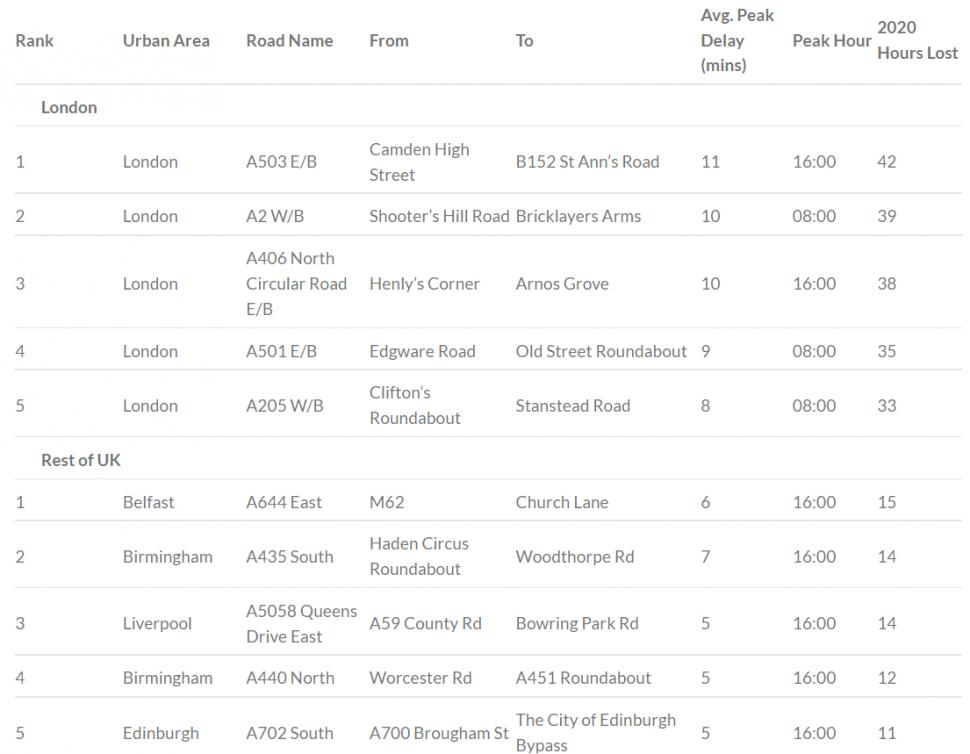