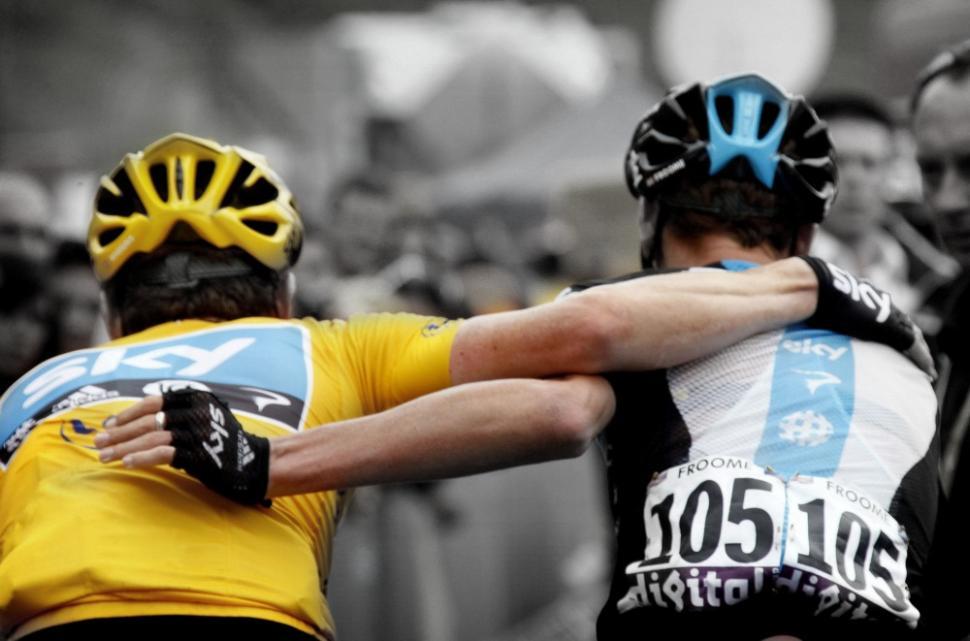 Sir Bradley Wiggins says he regrets his feud Chris Froome, and has revealed that he and his former Team Sky colleague hugged each other when they met at this year’s Tour de France.

“The whole fall-out with Chris Froome was really regrettable,” said Wiggins, speaking on the Geraint Thomas Cycling Club podcast. “I impacted on that a lot, the way I behaved.”

He continued: “It’s just been really nice to make peace with all those people since then. Me and Froome met up for the first time actually at the Tour this year, at a night club towards the end.

“We hugged it out. I speak to him a lot now, and it’s really liberating to go back and behave like you should have been behaving, really.”

Wiggins became the first British winner of the Tour de France in 2012, taking the yellow jersey that year on Stage 7 at La Planche des Belles Filles, on a day when Froome won the stage.

Five days later on Stage 11 to La Toussuire, Froome appeared to attack Wiggins. He would eventually drop back to his team leader, but after the stage their respective partners had a spat on Twitter that David Millar, riding the race for Garmin-Sharp, nicknamed “WAG WAR.”

Wiggins finished on the top step of the Champs-Elysees podium, but would never ride the Tour de France again, while Froome – second that year – went on to win four of the next five editions.

He also spoke of his struggle to overcome his new-found fame after winning the yellow jersey.

“I ended up playing a character, I had this veil of playing a rock star,” Wiggins said. “I think it was a good disguise to walk through life like that, and the fame and adulation, I couldn’t handle that as me. I wasn’t good at taking praise.

“I handled it a certain way and be quite shocking and contentious and sweary,” he revealed. “I’d get drunk at things in order to perform and play the fool.

“That didn’t serve me well long term as it built up a perception of me – the impact it had on the kids, and keeping up this image of Bradley Wiggins, really strong, Tour de France winner.”

The roots of the rivalry for leadership of Team Sky between Wiggins and Froome go back to the 2011 Vuelta, when the latter took the race lead after the Stage 10 individual time trial in Salamanca.

The following day, despite wearing the overall leader’s red jersey, he was back on domestique duties for Wiggins, who took over leadership of the general classification but ceded it four days later to the Geox-TMC rider, Juan Jose Cobo.

Froome proved to be the stronger of the Team Sky riders in the second half of the race, which was won by Cobo, and would eventually be awarded the overall victory in 2019 after the Spaniard was disqualified for doping.

Wiggins, now a pundit for Eurosport, retired after the 2016 Olympics, where in the team pursuit he won the fifth gold medal of his career, while Froome is still racing, and is now with Israel Start-Up Nation.

Besides Froome and Wiggins, Thomas – who wasn’t at the 2012 Tour de France because he was preparing for Team GB’s successful defence of the team pursuit title at the London Olympics, but would himself win the yellow jersey in 2018 – was a founding member of Team Sky.

There had been rumours that the Welshman may move on from Ineos Grenadiers for 2022, although according to media reports in the past couple of days, it now appears that he is close to signing an extension to his contract.