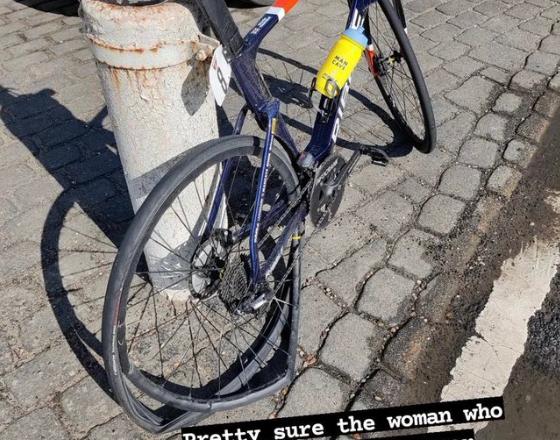 Tanfield was training in Essex, along with his brother and fellow Ribble Weldtite Pro Cycling rider Harry, when he was knocked off his bike by the “aggressive” driver
by Ryan Mallon

Charlie and Harry Tanfield were involved in an “intentional” hit and run incident while training in Essex yesterday.

The brothers, who are currently racing for Ribble Weldtite Pro Cycling in the Sportsbreak.com Tour Series, round six of which takes place in Barking today, were riding through Mistley when they were approached by a driver who allegedly began to act aggressively towards the cyclists.

According to Charlie’s girlfriend Kate Spencer, who tweeted about the incident, the motorist drove straight at the 25-year-old, knocking him off his bike and seriously damaging his rear wheel before driving off.

“This driver was behaving aggressively towards him and his brother, beeping the horn and shouting [at them] simply for also being on the road,” Spencer wrote.

“She then proceeded to intentionally drive into him, knocking him off his bike, drove over the rear wheel and then drove away.”

Spencer’s account was supported by a passer-by, who later wrote to the Tanfields’ team to praise the brothers’ actions in the wake of the incident, who said she saw the driver “shout abuse and drive on without stopping”.

& despite the issues faced by @CharlieTanfield today a real credit to themselves, the team and our partners 👏👏👏 pic.twitter.com/mOcswVM10s

“Cyclists have as much right to be on the road as cars and are so much more vulnerable in an accident,” Spencer added on Twitter. “So be patient and give them some space. I see anger directed at cyclists way too often online for simply sharing the road.”

She also confirmed that Tanfield emerged unscathed from the collision and that the incident has been reported to Essex Police.

Spencer added: “We have since found out that the vehicle is also without an MOT, so hopefully the driver will receive some consequences for her actions.”

Tanfield, a world and Commonwealth Games champion on the track who competed for Great Britain in the team pursuit at last summer’s Tokyo Olympics, later posted a photo of his mangled bike – the race numbers from the previous evening’s Tour Series event in Clacton still attached – on Instagram.

I wish I could say I can’t believe people would do this but I can’t. Disgusting& dangerous driving to deliberately knock a #cyclist of his bike 😡 Hopefully she can be identified & brought to justice #tourseries #cycling @CharlieTanfield @RibbleWeldtite pic.twitter.com/y1fQ3mWx7Z

“Bike’s seen better days [but] luckily I’m fine,” he wrote. “Worst part is that it was definitely intentional.

“Pretty sure the woman who did this would never think of assaulting someone in the street but for some reason thinks it’s acceptable in her metal bubble.”

> RideLondon: Cyclists claim they were assaulted by motorist with drawing pins on sportive route

Unfortunately, the hit and run on the Tanfields isn’t the first instance of aggressive and violent behaviour from motorists towards cyclists on the roads of Essex this week.

Yesterday we reported that two cyclists, training for next week’s RideLondon event in the county, claimed that they were assaulted by a motorist who allegedly threw drawing pins at them before scattering them over the cycle lane.

In happier news, Charlie and his brother Harry, who raced professionally for Qhubeka NextHash, AG2R La Mondiale and Katusha Alpecin before returning to the domestic scene this year, were also this week confirmed as part of Alastair Brownlee’s pace setting team, as the two-time Olympic champion aims to record a sub-seven-hour Ironman triathlon in early June.