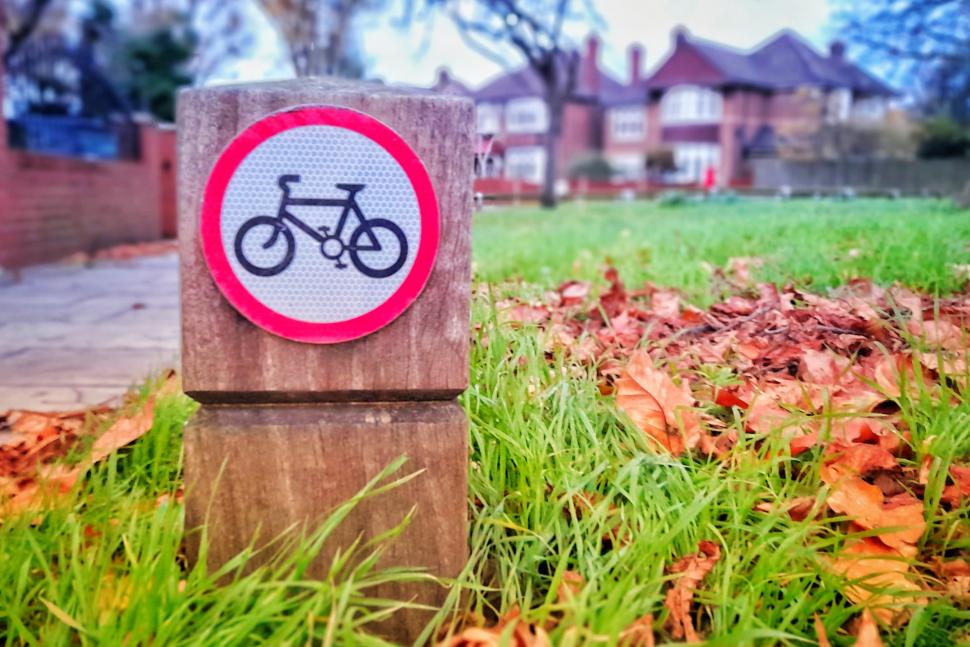 “There are numerous signs about not feeding the ducks but none about not cycling,” says Clive Perry
by Dan Alexander

A commuter who has been fined £80 for riding his bike through an area of a Hertfordshire town where cycling is not permitted has called for clearer signs to be put in place to warn people that it is prohibited.

Clive Perry was stopped by one of Dacorum Borough Council’s recently-introduced ‘Enviro-crime officers’ as he rode through the Water Garden in Hemel Hempstead on his way to work on 11 November, reports Hemeltoday.co.uk. The photo above this article is purely illustrative and is not from the same location.

The council officer told him he was riding on a path where it is forbidden to ride a bike and handed him a fixed penalty notice.

“I decided to cycle from Abbots Langley along the canal rather than drive to my new work premises near to the Forum in Hemel Hempstead,” he said.

“The route went through the Water Garden entrance near to the bus terminus, through to the other end near to the police station.

“This seems the most sensible and safest route to take rather than take the main road which is extremely dangerous and also Waterhouse Street as it is used by taxis and buses and quite chaotic.

“I did not cycle through the main high street as there are signs all over saying ‘no cycling’,” he continued.

“There are no ‘no cycling’ signs at the entrance at either end to this route – when I was stopped by the officer he pointed at a small sign near to the road where the path splits for the entrance to the covered car park, which is so far to the right it is easily missed.

“There are numerous signs about not feeding the ducks but none about not cycling. I think this fine is disproportionately unfair.”

Mr Perry provided pictures of the route to Hemeltoday.co.uk, which has published them as part of its article (not the same photo used to illustrate 'no cycling' in this article), and said he had taken the photos “to show how easy it is to make the mistake of cycling through the gardens as there are no appropriate or clear ‘no cycling’ signs in sensible places like the entrance at each end.”

A Public Spaces Protection Order (PSPO) in force in parts of Hemel Hempstead town centre prohibits, among other things, littering, cycling, skateboarding, consumption of alcohol and urinating and defecating in public in the areas concerned.

The Enviro-crime officers – commonly known in many other local authority areas as civil enforcement officers – can issue FPNs of £80 for breaches of the PSPO, although offenders face potential prosecution and a larger fine should they not pay it.

But Mr Perry, who is appealing his fine, said that he was worried that other people on bikes might not be aware that they were breaking the law due to the poor signage.

“I have seen numerous cyclists since cycling through the gardens probably unaware that they are also at risk of a fine,” he explained.

“These aren’t anti-social kids with no lights but ordinary cyclists like myself trying to get to work safely. There needs to be clearer signs so more people are aware of the rules.

“I feel on this occasion I should have had an initial warning that it was a no cycling area which I am now adhering to now that I know, rather than an instant £80 fine which seems disproportionately high considering the total lack of signage.

“We are constantly urged to use cycles and other low carbon emission modes of transport and there really is a lack of safe cycling in Hemel which I hope this highlights too.”

He added: “There are not many safe cycling routes in the town.”

However, Dyl Kurpil, managing director of the company District Enforcement which provides enforcement services to Dacorum Borough Council, insisted that implementation of the PSPO had been accompanied by a public awareness campaign, including “several education and engagement days that have been appreciated and well-received by the community.”

He added: “Although we cannot comment on specific cases, the act of cycling in the incorrect place, in an area that could potentially be hazardous or cause accident or injury to pedestrians, and despite ample signage explaining otherwise, will result in a person breaking the law.”

We have previously reported on a number of cases in which cyclists have fallen foul of PSPOs, which Duncan Dollimore, campaigns manager at Cycling UK, has in the past equated to geographically defined ASBOs and expressed incredulity that they are being used to “restrict the use of public space and criminalise behaviour not normally regarded as illegal... [like] the pernicious pastime which undermines the very fabric of our society: cycling.”