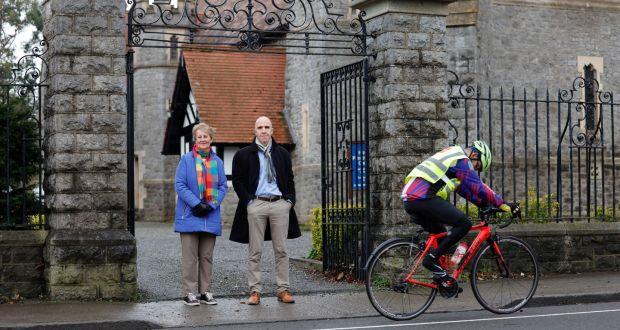 A Presbyterian church in Dublin has criticised plans to segregate an existing cycle lane from traffic, which it says will prevent worshippers from continuing to park – illegally – outside the church.

Parking is currently prohibited on the street in front of Howth Presbyterian Church due to the presence of a non-segregated bike lane which runs from Sutton to Howth, two Dublin suburbs. Fingal County Council plans to install bollards along this route as part of a £3.2 million programme aimed at “developing safer infrastructure for cyclists and pedestrians in towns and villages across the County”.

However, the plans have come under fire from the local church. Elder Michael Sparksman told the Irish Times that the proposed bollards would mean that “the right to worship is being overtaken by the right to cycle.”

“The council suggested people walk, cycle or take public transport but that is really not viable given our age profile and the distances people come from,” Sparksman said.

The church elder admitted that parking on the current cycle lane outside the church is “not strictly” permitted, but said that a “common sense” approach has ensured that no churchgoers have been ticketed for parking illegally during services.

Sparksman also noted that one of the council’s suggestions is that parishioners could park in Howth village and walk to the church, which itself has on-site parking. “That would take 15-20 minutes and what are they to do in the rain? It is an attitude that beggars belief and borders on arrogance.”

“We have a constitutional right to worship. People have been going to worship in this church for 121 years. For the council to decide we can’t do that because we can’t access the place is plain wrong.”

In 2017 Tonya McEvoy, a childcare worker from Co. Dublin, was killed during an Orwell Wheelers club ride after a motorist crossed over a continuous white line to avoid cars parked illegally by people attending a nearby church.

Meanwhile, a vicar in Henley, Oxfordshire, has criticised the proposed introduction of a cycle route on the pathway between Church Street and Hamilton Avenue. Rev Duncan Carter of Holy Trinity Church claimed that the new route would endanger children who use the current path to walk to school.

However, the proposals were praised by town councillor Laurence Plant, who argued that the new route would encourage cyclists who lacked confidence on the road or young families to ride their bikes safely.

“Henley is quite difficult to navigate not using the main arterial routes”, he said. “This is a good attempt to make Henley safer and easier to navigate.”