It's Christmas Eve Eve and Dan Alexander is on hand for your morning dose of live blog action before Jack Sexty returns to the hot seat this afternoon... Changes to the Highway Code are set to be introduced by DfT & will see the introduction of a Hierarchy of Road Users & will give pedestrians & cyclists greater priority over cars at junctions and crossings #DriveSmart #FifeRP
Infohttps://t.co/FKNfGGlilghttps://t.co/NbtzsEGKeR pic.twitter.com/3B26SzqeHL

We've said it, said it again and then at least once more again, but looking at our inbox and social media it seems some people (drivers of motor vehicles it would seem) can't get their head around having to actually give way to pedestrians and not close pass cyclists.

The latest organisation to attempt to prepare the public for the impending changes are Scotland's Road Policing Unit, with the reaction being a mix of sensible and completely irrelevant points about pavement cycling, and being worried about getting rear-ended when obeying the law and waiting for a pedestrian to cross the road. How about the person in the vehicle behind pays attention? We can only hope...

On 14 December Rendel Harris set out to cover 1,026km virtual kilometres, which would be the distance between his house in Peckham and Monte Carlo in Monaco. Ten days later, he completed the challenge and has raised £1,230 at the time of writing for the Toilet Twinning charity, who build toilet facilities in some of the poorest parts of the world for just £60 per toilet.

Rendel told road.cc: "...just want to say a huge thank you to all the generous road.cc riders who chipped in almost a third of the £1500 raised so far, and many thanks indeed to road.cc for letting me publicise it through the forum."

Well done Rendel! If you want to donate the fundraising page can be found here.

The Chisholm Trail is Open! pic.twitter.com/sYmyteFh5X

As some on the people who have commented on the post note, this 26km cycling and walking route (when fully completed) has been a long time in the making... here is an article on the proposed route from 1998!

23 December 2021, 14:19
Cambridge news #1: bike thief jailed for six weeks and is not allowed to be in possession of bike unless he notifies police first 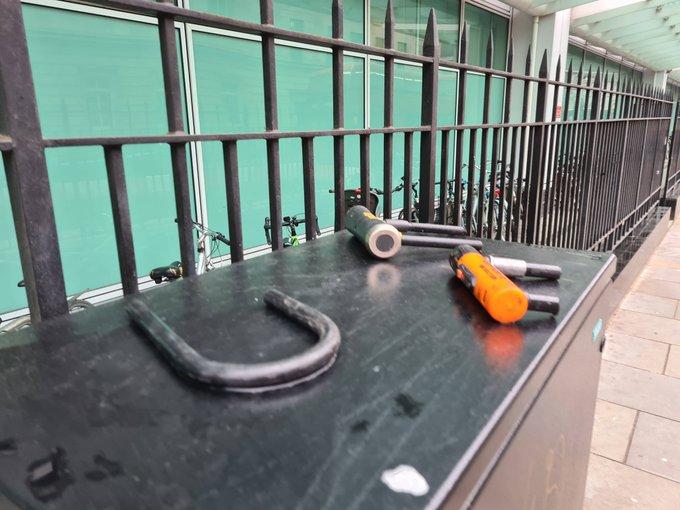 35 year old Stephen Neal was caught trying to steal a £900 bike from a Cambridge store, and has now been sentenced after previously pleading guilty to bike theft and criminal damage.

Neal was seen taking a bike on 4 August, and on 6 September was caught using bolt cutters in an attempt to steal a bike in a shop window in Cambridge' Beehive Shopping Centre.

Neal was given his six week prison sentence on 30 November, and on Tuesday was handed a rather specific two-year Criminal Behaviour Order (CBO). The CBO says Neal must not "be in possession of any pedal cycle part or pedal cycle unless having notified the police within 24 hours of his lawful possession, providing any details of the possession", or "go to Superdrug, Boots or Go Outdoors stores in Cambridge within the boundary of the M11, A11 and A14."

Bike theft has become a serious issue in Cambridge, with the city recently being named the UK's bike theft capital.

“All reports of bike theft are taken seriously, and we would encourage people to report offences so we can build up a picture and deploy resources accordingly.”

Updated: Jail for driver who had been drinking at illegal lockdown party and left teen cyclist to die

Victim’s father says his son “was left as roadkill by someone who should not have been on the roads”
22
23 December 2021, 12:24
Electric vehicle delivery lane

🚳, its an EV delivery lane pic.twitter.com/pMbpat64ID 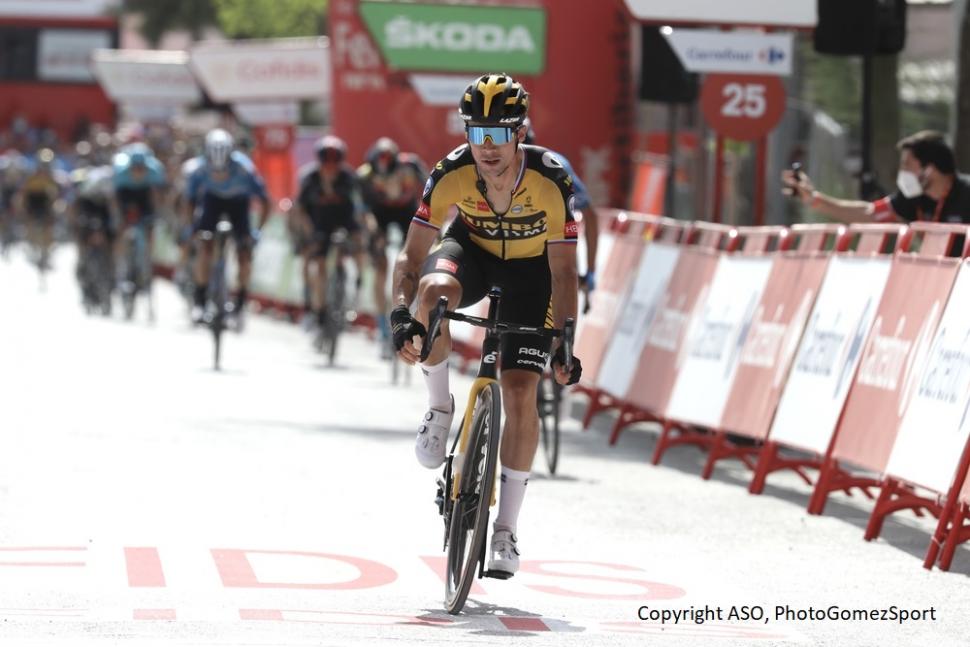 Primož Roglič will be wearing Jumbo-Visma yellow until at least 2025 after confirming a new contract with the team. Roglič has been with the team since he joined the WorldTour in 2016, and will have completed a decade by the time his new deal expires.

During that time, the Slovenian superstar has won three Vuelta a España titles in a row, the Olympic Games TT, Liège-Bastogne-Liège and more one-week stage races than you can shake a stick at.

"I have grown with this team since I arrived in 2016," Roglič said. "We already have quite a history together that I am very proud of. I made my debut in the World Tour peloton at a somewhat later age. It may have looked easy, and the best moments surface the fastest, but it wasn’t always easy.

"Still, things have moved forward rapidly for me and my development. I am not solely responsible for those beautiful moments. I did that together with my teammates and the staff. It is great to be part of this team in the coming years as well."

Looking ahead to 2022, Roglič didn't name any races in particular, instead asserting his "goals are independent of results".

You know what they say about asking a silly question...well, one of our readers spotted this sign in Friston Forest, East Sussex...

Clearly a popular spot for walkers and cyclists, one member of the community decided to politely request cyclists give a little bit of notice that they're there. You know, maybe a 'hello' or some aggressive freewheeling...

What our sign maker certainly didn't have in mind was this sharp reply. Top marks for comedy value and creativity, although we're pretty sure we've seen this joke before.

These sort of sign battles periodically pop up on our live blog, usually when NIMBY locals take the time to protect their precious village from the barbarians on bikes by creating such masterpieces as this... 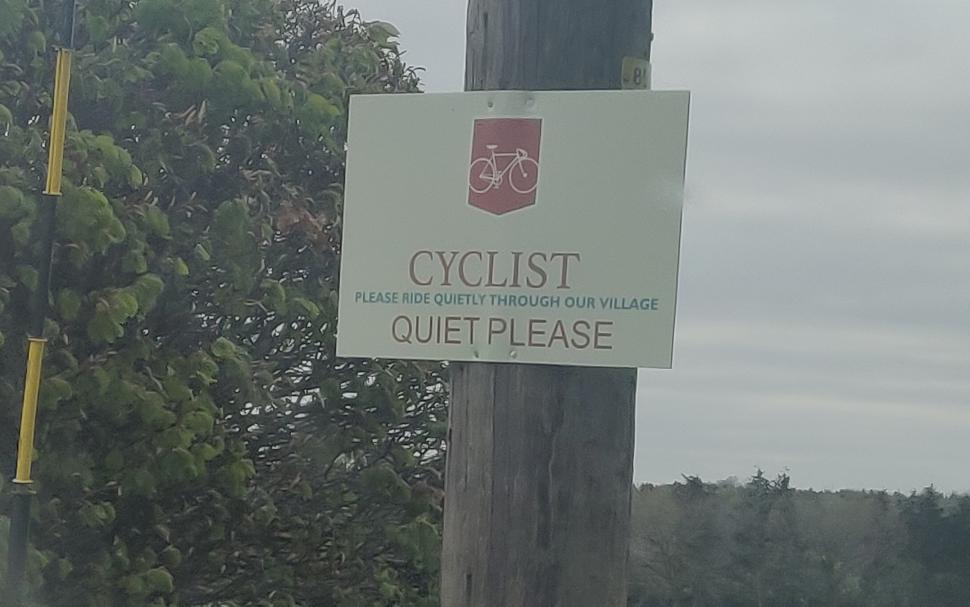 "Sorry, Phil. You can't come through here with that freehub buzzing like that"... "Ah, never mind, the sign says 'cyclist'. We're in a group so must be fine..."

Elsewhere in the archives we found this gem...who could forget the "passive-aggressive sign battle" one cyclist had after their NIMBY neighbour put up 'no cycling' signs. Cue: cycle path, beware of the kangaroo, beware of the dragon, beware of the troll, mind the gap, think bike and beware farm vehicles signs being strewn across every post on said farmer's road...pettiness personified, but fantastic entertainment for the rest of us.

Hmm, I'm left wondering why drivers seem a bit more respectful and less impatient around this. Maybe I should have just bought or made a more coffin-like shape? pic.twitter.com/vFWqDH3ODt

Honestly, I'm more intrigued by what's in the box? A pig in blanket for every driver Mikey has caught using their phone behind the wheel?

I will not be taking part in the Rapha Festive 500. Even though I’m a RCC member and would probably buy a binbag if it said Rapha on it, I find the whole concept nauseating. Just go for a cold, long ride in January and don’t shout about it. I consider the matter closed. Thank you pic.twitter.com/L9D86JbAhj

I won't be participating either. No moral objections here, I just can't be asked to get out on my bike eight times in as many days at this time of year...and forget doing it in less than eight rides...maybe I'll do an ode to Australia and do a June 500 next summer when the weather's nice...

Major kudos to any of you lot prepping your routes ahead of the start tomorrow. What's on the menu for day one? An easy opener? A big day to get as many miles out the way early? Or one of eight perfectly even 62.5 kilometre rides? Let us know in the comments... TikTok video of woman pedalling as she munched a burger has gone viral in recent days – and they are an actual thing, says Snopes.com
6
23 December 2021, 09:23
It's not just Mathieu van der Poel laying down the watts

Mathieu van der Poel's Dutch compatriot Boy van Poppel is also putting in the work this winter. If we thought we'd get dropped on the gravel, we'd definitely get dropped here...enough watts to do your morning toast.

We'd rather take Egan Bernal's approach...just surround yourself with so many dogs you can't do anything...

This is probably just an 'easy' spin for the great Dutchman...

Gearing up for his cyclo-cross return at the World Cup round in Dendermonde on Boxing Day, Mathieu van der Poel has been out shredding the trails with Alpecin-Fenix teammates Tim Merlier and Gianni Vermeersch. Based on this footage we reckon we'd sprint to the first corner to stay in contact and then very quickly give a shout of 'see you at the cafe!' before being unceremoniously dropped...

To make matters worse this apparently isn't even Van der Poel in top shape...he's been recovering from a wound on his knee sustained in a "stupid crash".

"I wasn’t even training, I was just cruising with a friend through the forest and I just lost my front wheel on a slippery part that I didn’t expect and I hit a gravel section first with my knee, so I was wounded pretty bad. I immediately felt that it wasn’t good," Van der Poel explained.

The world champ has delayed his cyclo-cross return until this Sunday when he'll go head to head with Wout van Aert and Tom Pidcock. road.cc Liam has already claimed it's the biggest event of his week...you sure there's nothing happening on Saturday, Liam?

"Wout is in really good shape. I expected him to be at the immediately and win, but not in the way he did it," Van der Poel told reporters ahead of the Boxing Day scrap.

"Maybe [I can race] for the win. The level behind Wout is something I would normally be able to follow. When I came back into cyclo-cross and could see how far he rode away sometimes, I don’t know if I have that kind of legs already to follow him but I should be able to be in the group behind. Hopefully I can surprise myself as well."