"Isn't 8.5w/kg novice level on Zwift?": Reaction to THAT virtual cheating story; Is this the safest cycling route in the UK?; British Cycling CEO merry-go-round continues; FDJ join the dark side; Vine goes Partridge + more on the live blog

Happy Friday! The weekend is just around the corner, Dan Alexander will be bringing it home with your final live blog of the week 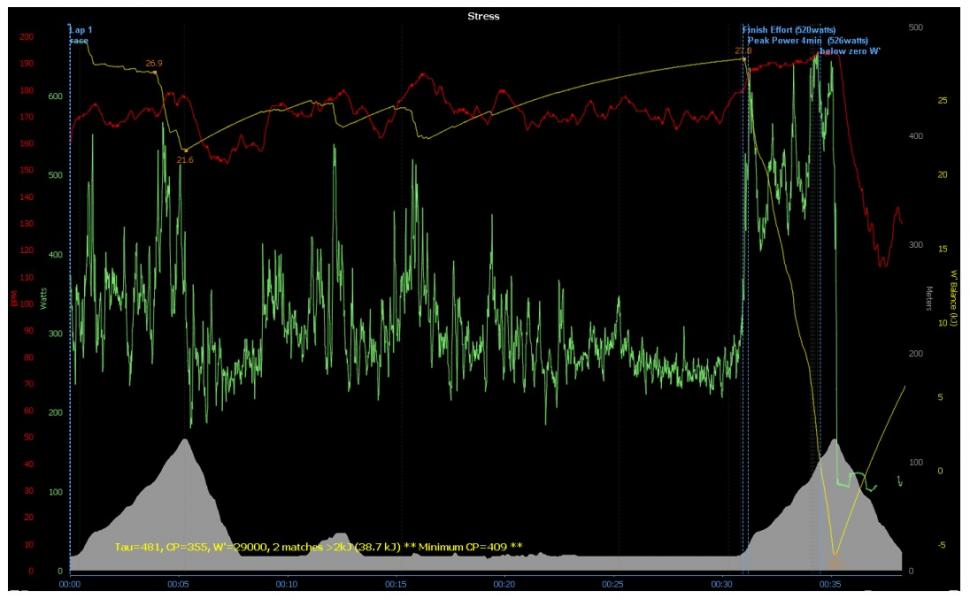 I've got a confession... whisper it quietly, but for the first time in a while I quite enjoyed delving into a Facebook comments section... 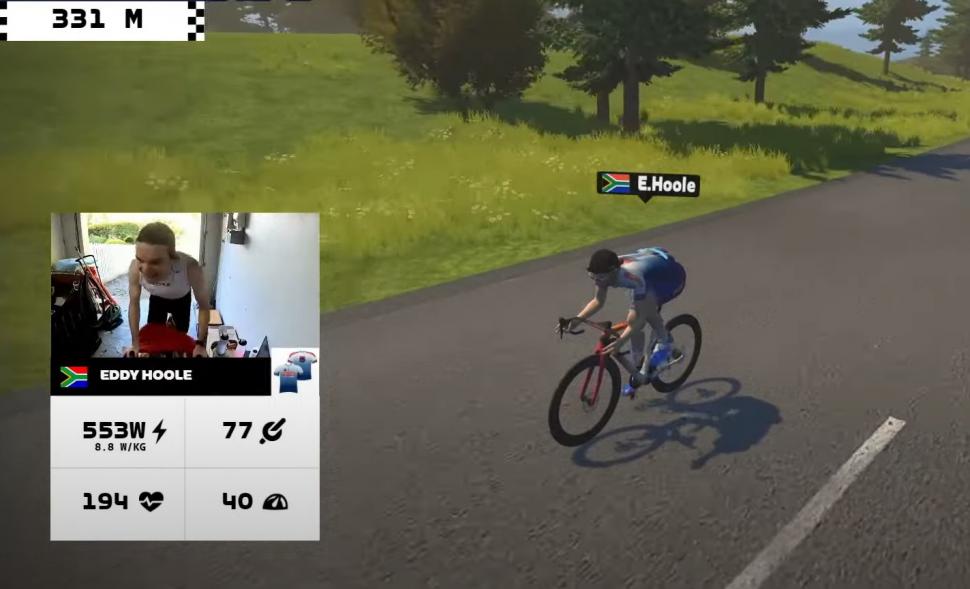 The online reaction comes after our report that Zwift racer Eddy Hoole has been banned for six months after being found to have pulled off a spectacular ride to earn a qualification spot at next year's world champs by... hacking a data stream.

Despite 6,000 people watching the live stream the South African hoped it might go unnoticed if he launched a four-minute 8.5w/kg 526w attack... unsurprisingly, we have to tell you — it didn't.

Anyway, the Facebook commenters were on form... (look away if you don't want to hear people saying mean things about virtual racing)...

Jamie Brown: "You mean people cheat on Zwift? I'm both shocked and appalled..."

Paul Medcalf: "8.5 W/kg is nothing on Zwift. See those numbers often (and higher)😂"

Jeff Rey: "I don't even know why I bothered reading that. What a pointless sport." Cheers for your continued support, Jeff.

Steve Boston: "Why?! For the love of God why cheat? Especially on data driven site."

Ken Burk: "I saw a rider on Watopia today going 5.4w/kg consistently with no fluctuations at all, with over 250 miles rode. Must be the next Lance."

Paul Cooper: "Why do people take indoor riding so seriously? Get out and play bikes ffs."

This is worse than when that 2nd cat took EPO to race in the Surrey League.

Apparently things on Rouvy aren't much better, someone sign this lad up ASAP... 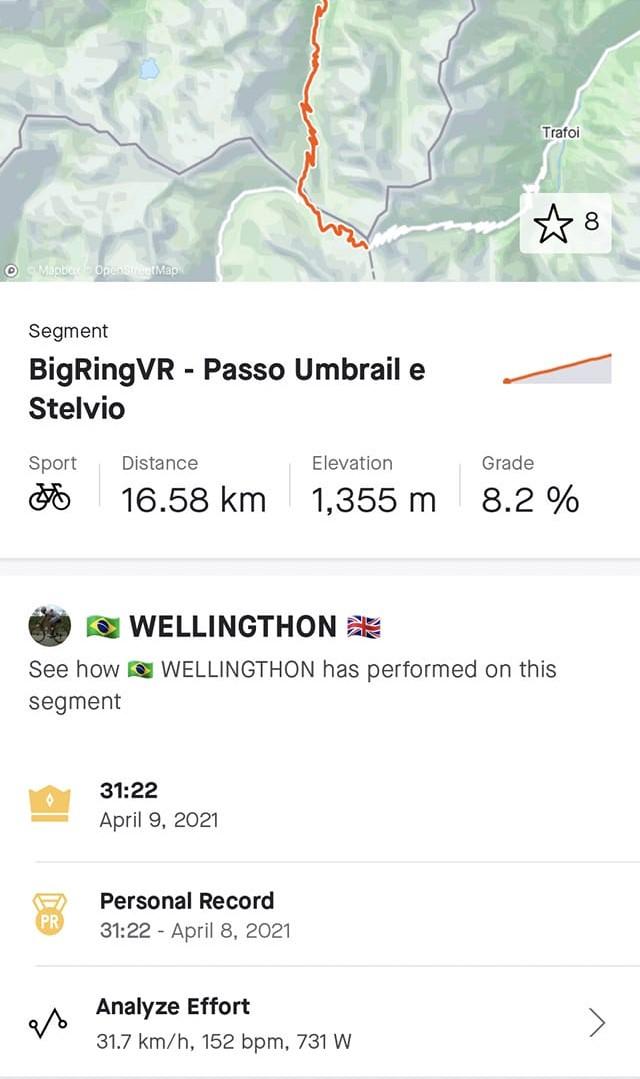 Here's a weird one for your Friday afternoon...

So ONE of these four things will be banished from the UK forever, but at least they're letting us vote on it, pick what goes... 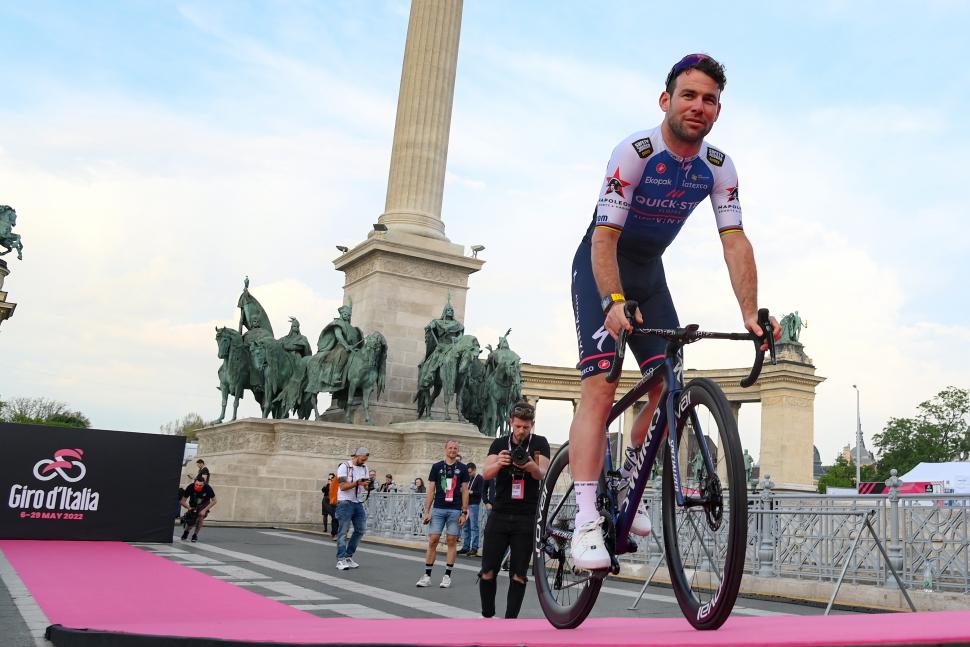 With the collapse of B&B Hôtels, the team rumoured to be signing Mark Cavendish, all options are back on the table...

All options except Israel-Premier Tech who say their 2023 squad is "complete". The team today confirmed the signing of Welsh pro Stevie Williams from Bahrain Victorious and, in the press release, say he "completes" their 2023 roster.

“I’m really grateful for this opportunity and look forward to getting stuck into racing next year.”

Given the cold weather alert over the next few days, we're appealing to cyclists to be safe and think about taking public transport or walking instead, just until the roads and cycleways are clear of ice https://t.co/RF6W4M3Ha5 pic.twitter.com/B06h3J3ms3

Perhaps you shouldn’t be so negligent as to allow such a dangerous hazard to exist… https://t.co/qt6RMQIeVS

Is this how you encourage active travel, or do you do it by prioritising clearing ice from the infrastructure active travel relies on?

There are significant bus strikes over the next few days… why not grit the cycleways? Or are you absolving yourselves if responsibility and liability? This is the most bizarre messaging. 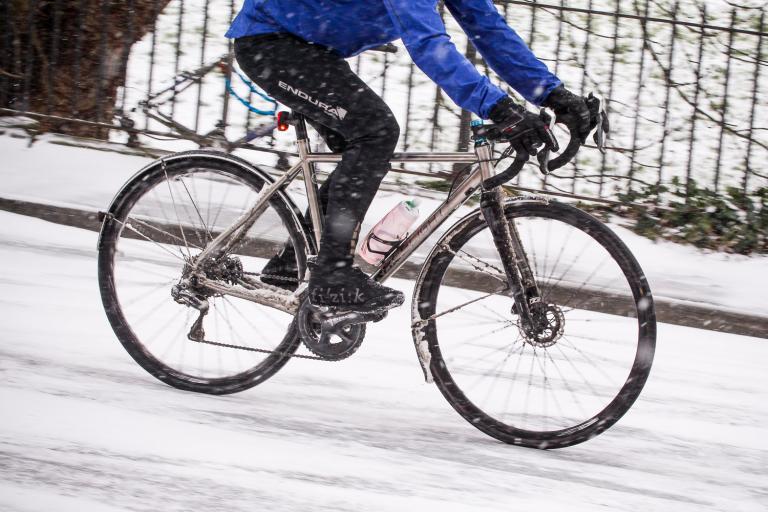 Our regular winter feature on how to ride your bike through a wintery wonderland without falling off
118
09 December 2022, 14:31
Kids safer on roads after virtual bike training, study suggests 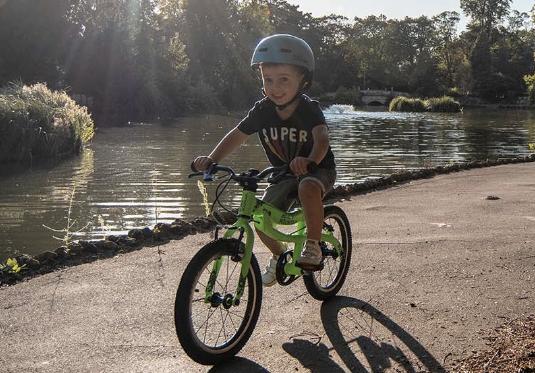 Research by Brunel University London, backed by the Road Safety Trust, suggests that children's on-road cycling safety and performance improves after video training. The study showed that kids communicate their next moves, better understand junction priority and make better observations after video training. To be fair using other people's behaviour on the road alone could lead you to some fairly questionable conclusions...

Sport & Exercise Psychologist Dr Dan Bishop said the difference was "so dramatic that I would say that, as a parent, I would feel more confident in my young children’s ability to cycle safely on roads if they had completed this training."

Researchers tracked 33 10-12 year-olds who had done Bikeability Level 2 training. They were split into two groups and one group tried a new virtual training course. The children pedalled a static bike in a lab while watching immersive real-world footage shot from a cyclist's viewpoint. They rode five virtual routes on main and minor roads, all passing a school.

Researchers tracked the children's head and eye movements, and when they pressed the brake. The researchers also asked questions to check the children's observational skills and understanding, such as when they can turn and who has priority. Both groups then took video-based tests and were assessed when riding on real roads, by qualified instructors.

"The effects we saw are profound," Dr Bishop continued. "And while the training only focussed on two of the four Core Functions in the National Standard for Cycle Training (observation and communication) — we saw pronounced effects on the other two Core Functions: positioning and awareness of road user priorities. This suggests that some implicit learning of related behaviours also occurred."

Floating bus stops are back in the news... this time very close to home for road.cc... 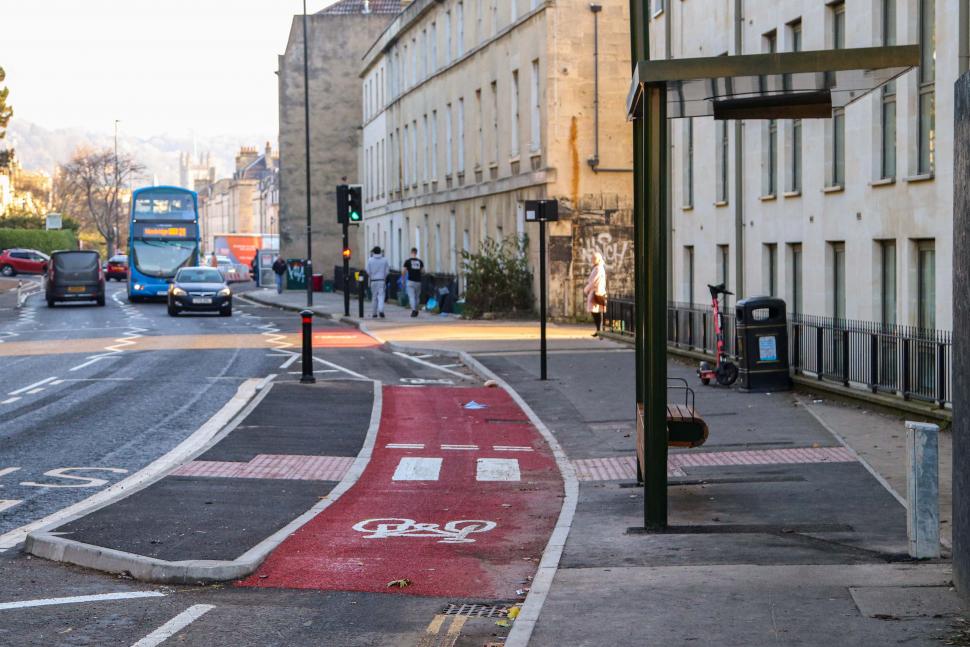 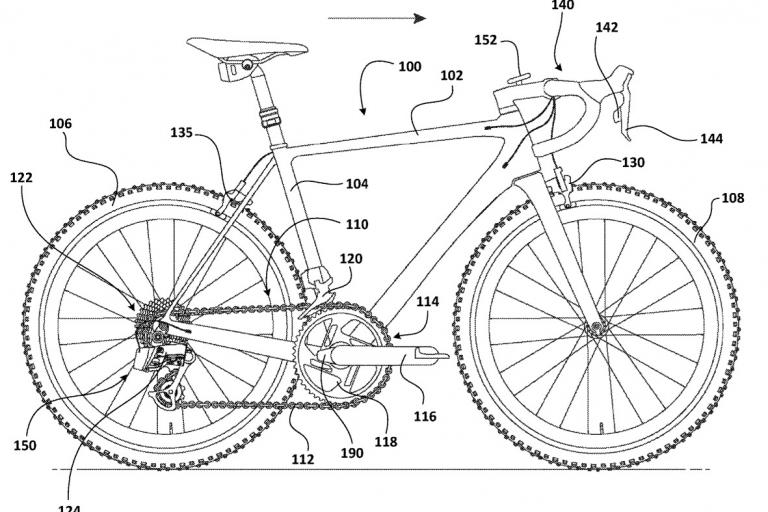 New patents suggest an ERG mode out on the road could be a possibility, and that the long-rumoured e-bike drive system is on the way too
2
09 December 2022, 12:24
If the World Cup was pro cycling...

Cycling YouTuber Francis Cade is a month into his challenge alongside ride companion Justin, with the pair aiming to cycle and handcycle across the US, from Florida to Los Angeles.

Currently battling across Texas' vastness the pair are raising money for Get Kids Going! a charity which provides funds to help with the costs of the bespoke equipment needed to take part in sport.

The entire journey is being documented on Francis' YouTube channel with daily videos, yesterday's is below...

Incredibly, the fundraising bar keeps getting raised due to the flood of donations to the JustGiving page, with just over £80,000 having been donated at the time of writing. I'm sure that number will be much higher by the time some of you read this!

Find out more about the challenge and donate here...

British Cycling's acting CEO Danielle Every, who stepped up from cycling delivery director when former CEO Brian Facer left his post in October, will herself leave the governing body.

British Cycling says Every will stay in her role until the spring when she will become chief operating officer of the PGMOL, the body which oversees professional football referees and match officials in England.

She said: "I have loved my four years at British Cycling and will leave feeling incredibly proud of what we have achieved, and the positive impact we continue to have through our work. Over the coming months I am wholly committed to setting us on the right path as we move into another busy and exciting year of activity, and ensuring a seamless and positive transition to a new CEO."

Tenuous cycling content of the day. I say 'tenuous', it's got nothing to do with cycling other than involving Jeremy Vine who starred on yesterday's live blog...

> Jeremy Vine highlights grim reality of gridlocked London route where cycle lane was ripped out... as council due in court over early removal

Any excuse to get Partridge content on the blog...

Someone give the FDJ video editor a raise...

No doubt that'll be blasted in the dressing room ahead of tomorrow's quarter...

To add a bit of balance to the 'tragic roundabout' debacle from earlier in the week Harry sent us some footage of the entire Manchester route, from the city through Salford and Trafford, and as you can see there's way more to it than just one dodgy roundabout...

Is this the safest 11km of continuous cycle lanes in the UK?

I've filmed the entire 35 minute route across Manchester, Salford and Trafford on YouTube - linked below. pic.twitter.com/yHavPBUBVr

Now, considering I don't think I've ever ridden anywhere in the UK where you can enjoy 11km in a major city (or elsewhere, for that matter) through continuous, mostly segregated cycle lanes, I'm going to have to leave it to you lot to offer suggestions of infra that can compete for the title...

Of course, it's not perfect, but it's a hell of a lot better than most lanes we all see on a daily basis up and down the country. It's probably also worth noting the aim here is safe and accessible active travel, not race training and Strava segments, so if you're looking at this and thinking you'd rather use the road, it's probably not designed for you. But, how many more people would be encouraged to pick up cycling for their urban journeys if they had this route on their doorstep?