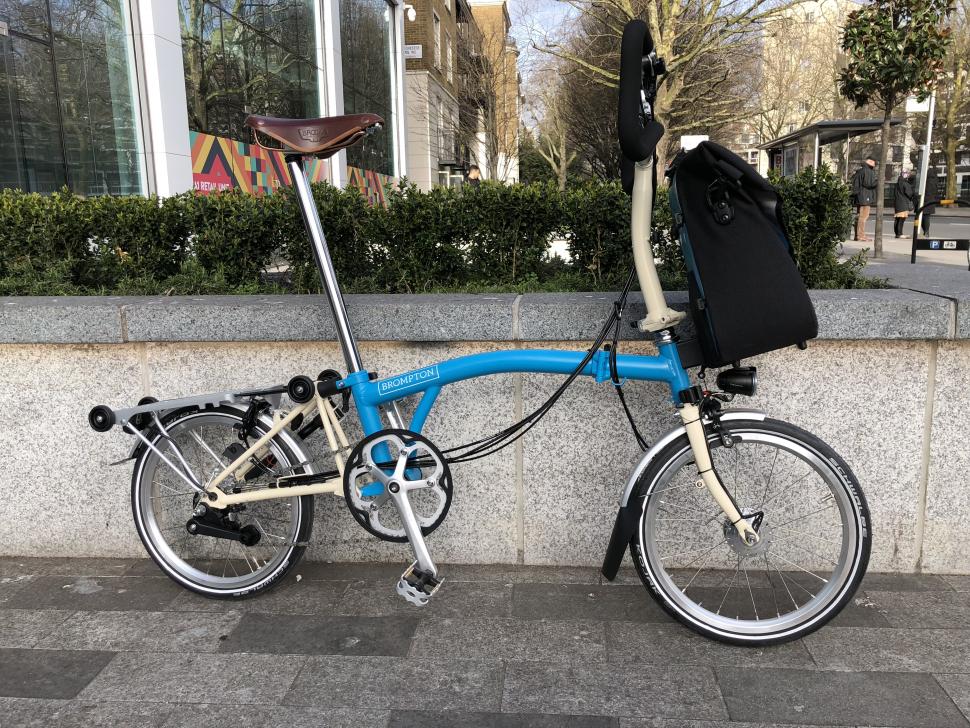 CyclingMikey, real name Mike van Erp, was this week the victim of a frightening bike theft which saw his Brompton forcefully taken from a colleague by a hooded man threatening to use a knife, moments after the pair had been teaching a special needs child to ride the bicycle in Hyde Park.

The road safety campaigner who uploads videos of law-breaking drivers to YouTube, and can count Guy Ritchie and Chris Eubank amongst the notable offenders he has caught, told us him and his colleague finished cycling and left the folder "some distance away".

While Mikey and the young child were gone, the offender, with their face covered by a hood and mask, also on a bike approached his colleague, "shoved him to the ground and took the bike."

My stolen Brompton - robbed with force from my colleague, who was threatened with a knife. Pretty please retweet and keep an eye out on the roads and auction sites. The bike was mostly used by a young lad with special needs. Currently fitted with tan wall tyres. Unusual colours. pic.twitter.com/IypMfXhnhE

"The thief put the bike on the handlebars of his bike," Mikey explained. "My colleague gave chase. The thief threatened him with a knife so thankfully my colleague desisted and the bike thief rode off.

"The Royal Parks Police responded within minutes, and I left my colleague to take the young special needs lad home safely. I went with the police and we attempted to follow the trackers on the bike."

The Brompton was fitted with three trackers: an Apple AirTag, a Tile, and an Invoxia GPS tracker, and the Royal Parks Police were "super nice, and blue-lighted me to the first tracker location. That was a bust — the thief had found the tracker inside the 3D printed reflector I'd installed on the seatpost. He removed it and left it by Linhope Street, north of Marylebone Street.

> CyclingMikey ends up on car bonnet during confrontation with angry motorist

"Two other police cars turned up, one of whom stopped to check the pub CCTV (Sir John Balcombe Marylebone), but didn't see the thief as he must have come in from the other end of the street.

"Also an unmarked car with plainclothes cops, they WhatsApped my photo around the other officers, and we then tracked the Invoxia GPS tracker to a block of flats on Lodge Road. Couldn't find anything there, and gave up the chase after some looking around.

"The officers did manage to check all the stairs and corridors of that block of flats. My GPS tracker is still there, but we couldn't find it. I went back yesterday, and still couldn't find the tracker. It's either been dumped, or is on the bike in someone's flat. I also had a Tile tracker, that was dumped nearby on Lisson Grove.

"It's an unusual colour Brompton, with a Brooks saddle and P-type handlebars, and corn blue and ivory frame. It's currently fitted with tan wall Schwalbe marathon racers."

Another view of the bike. pic.twitter.com/vqU5ngI1dE

Mikey's new GoPro Hero 10 and Berghaus paclite rain jacket were also on the bike, which cost £1,835 new, when it was taken.

"I'd just replaced most of the drivetrain and the front mudguard. The front mudguard was damaged by a driver assaulting me in January when he got angry with my having videoed him WhatsApping. That's another story...

"There are so many other deserving bike thefts across the UK every day too. My story isn't anything special."