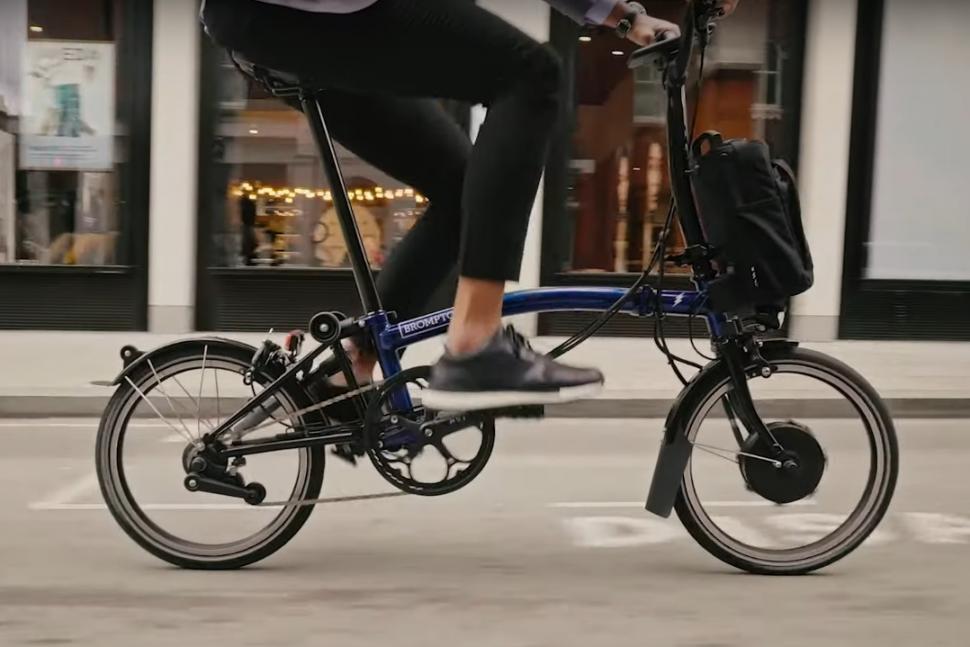 Brompton owners in Hackney are being warned to be vigilant following a spate of robberies in the area in which people riding the folding bikes have been targeted by gangs of bikejackers riding electric bikes.

One cyclist who was assaulted by a group of men, leaving him bruised and in need of stitches, has put up posters in the local area alerting fellow Brompton riders to the criminal activity, reports ITV London News.

“There were lots of people in the park having picnics and I was on a cycle route,” said the victim, who asked for the specific location not to be named due to fears for his own safety.

“Suddenly behind me I heard the rumble of electric dirt bikes, I didn’t really have any time to react.

“They came up behind me and ambushed me, attacked me physically and I was on the ground and they were still attacking me.

“I came away with bad bruising and swelling on one side of my face, and they took my Brompton bike,” added the cyclist, who said that his ordeal had left him “very shaken.”

Brompton bikes have long been attractive to thieves due to their ease of portability plus the fact that perhaps more than any other bicycle, they retain a high value on the second-hand market.

“It’s a shame because there is so much freedom with a folding bike plus the security that you’re not leaving it outside,” the bike’s owner continued.

“You never consider a gang of five men will come and take your bike away.

“I’ve been on social media to get the message out to other Brompton riders,” he added.

“I’ve been contacted by around ten others in the last week that this has happened to, men and women violently attacked.”

Another cyclist told My London that she was standing outside the Duke of Richmond pub in Hackney last Saturday afternoon when “two kids in scrambler bikes” snatched her Brompton from her.

“I was in shock,” she said. “I was violated in my own neighbourhood. I thought it was a joke and they would drop the bike.

“It’s put me off Bromptons for sure,” she continued. “I’m going to use Lime and Human Forest [electric hire] bikes. Why would I put myself in danger? The police were like you were lucky because others were being assaulted. It’s made me more scared reading up on it.”

A Metropolitan Police spokesperson said: “We are aware that a number of people have been targeted recently by robbers in the Hackney area for their Brompton bicycles.

“At the moment we are treating four offences as potentially linked. The suspects appear to be aged in their late teens, wear face coverings and use mopeds or electric bikes.

“The suspects have targeted men and women, both during the evening and day time, with varying degrees of force used.

“We are following several lines of enquiry. As a result of the robberies, we have deployed officers, including specially-trained tactical pursuit and containment officers, to patrol the area in unmarked and marked vehicles. We know this crime is concerning for cyclists in the area, but please be assured that we are working hard behind the scenes to keep you safe and bring those responsible to justice.

“We would urge cyclists to remain vigilant and to report anything suspicious to us on 101, or 999 in an emergency. Alternatively, you can speak to the independent charity Crimestoppers on 0800 555 111 or online at crimestoppers-uk.org.”

The Met subsequently confirmed that a suspect has been arrested, saying: “As part of our commitment to tackle a recent spate of robberies in Hackney, officers from Operation Venice arrested a 21-year-old man on Wednesday, 6 April in connection with a number of robberies in the area where Brompton bikes, as well as other property, were stolen.

“He has been taken to an east London police station. Enquiries continue.”

Last year, we reported on a spate of bikejackings in and around south west London’s Richmond Park in which cyclists were robbed of their bikes by moped-riding muggers, with the victims threatened with machetes in some cases.

The robberies stopped after police in the area stepped up patrols.