The sportive is returning with a new route out of the capital, and some Essex locals appear to be rather unhappy about it
by Simon_MacMichael

Essex will this Sunday host upwards of 25,000 cyclists as RideLondon returns after a two-year gap due to the coronavirus crisis – but not all locals will be welcoming the riders with open arms, with tacks found on part of the route last week, and a petition launched protesting the event.

Moving to a late May slot instead of late July or early August and, the new three-day women’s race apart, taking place over one day rather than a full weekend, the past two editions have been cancelled due to the coronavirus pandemic, while Essex will host the major part of the sportive route, replacing Surrey which had hosted the Olympic legacy event since it was launched in 2013.

Last week, tacks were found strewn on a section of the route through Essex by Brother LDN rider Tim Allen, with a screenshot of his Instagram post sent to us by road.cc reader Andy, who noted: “It comes shortly after Harry and Charlie Tanfield were deliberately run off their bikes - also in Essex. Not a lot of love for people on two wheels in that county at the moment.”

Inevitably, a petition has also appeared online protesting across the road closures associated with the event, which will be held in Essex for the next five years, with claims similar to those we have seen in the past, such as when the event took place in Surrey, or with opposition to the former Velo Birmingham sportive in the West Midlands and surrounding counties.

Among the objections raised in the petition – so far signed by about 1,400 people – are that people including the elderly and infirm will be stranded in their houses, that local businesses will be impacted and the old, easily disproven objection that the emergency services will be delayed, although in reality many local residents enjoy such events passing where they live, getting outdoors and enjoying the event with its traffic-free streets as well as supporting riders.

Some signing the petition, however, have compared the effect of the event on them to that of the lockdown imposed across the country in 2020 to try and stop the spread of the coronavirus pandemic – although as far as we are aware, no-one is going to get fined for popping outside to chat with neighbours, pop to the local shop for non-essential items or even host a party (or work event, for that matter). 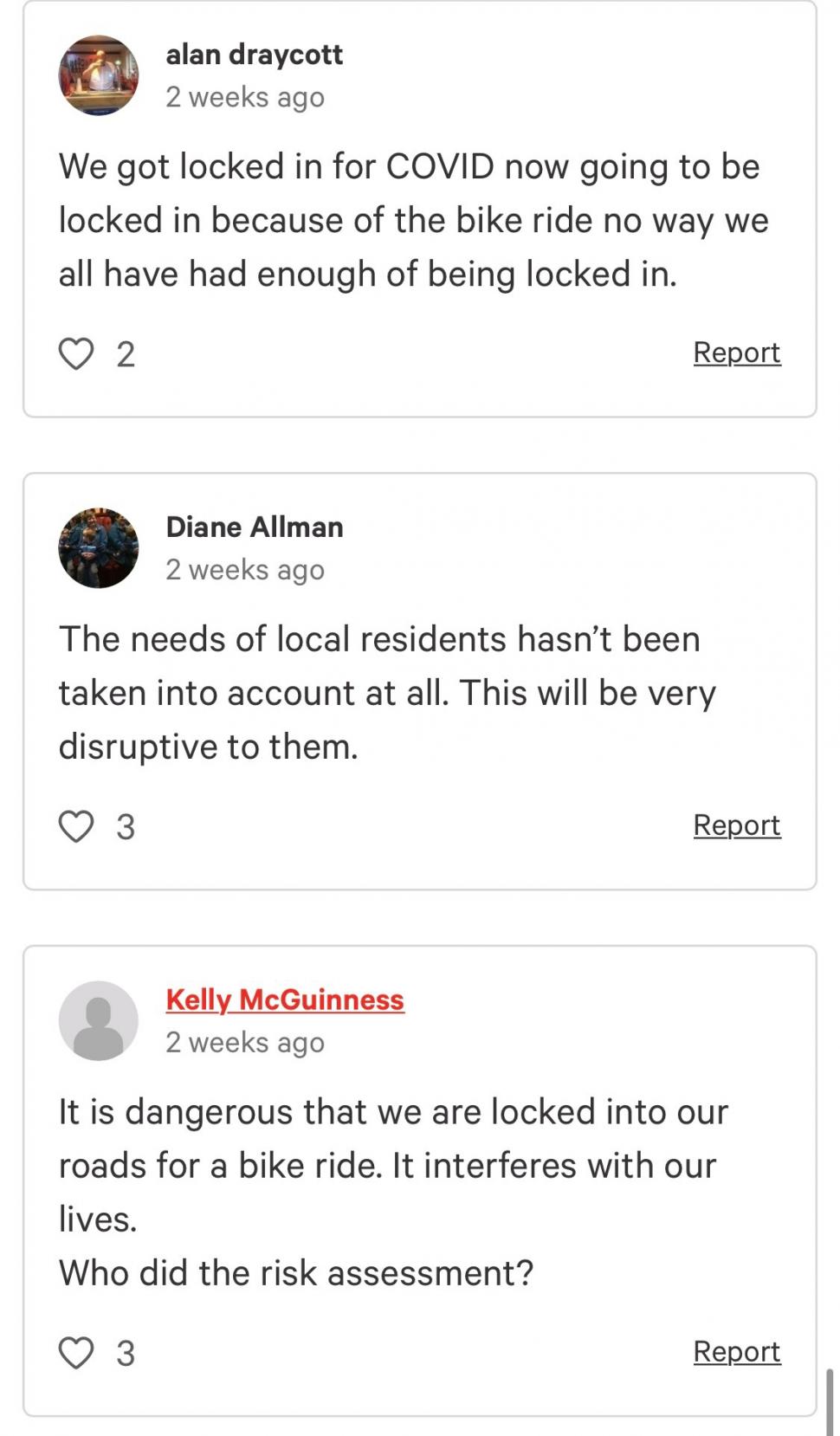 RideLondon, as you may know, is owned by the same company behind the London Marathon, which has run successfully on the same roads in south-east London, Docklands and the City of London and City of Westminster since 1981 – and perhaps due to that longevity, and the fact it’s an established part of the annual calendar accompanied by a party atmosphere, does not seem to get the press focus on road closures that cycling events attract.

In contrast, here's how the London road closures for 000's of runners are reported: https://t.co/dpJGfChdu2

You are missing the point here. The fact that volunteers have to organise rides to accompany hundreds of families from all 4 corners of London so they can have a taste of what cycling without fear of motor traffic danger feels like, is a rather sad indictment.

I took this video just after my first child was born. I am so excited to be taking my 3 year old to her first @RideLondon free cycle this Sunday! https://t.co/Q8Nl6J4HgK

Here is the timetable of this weekend’s events, as tweeted by London’s cycling and walking commissioner, Will Norman.

This weekend @RideLondon - the world's greatest festival of cycling - is back 🥳

An estimated 100,000 people will be riding on traffic free roads in London & Essex.

Join us for the family friendly FreeCycle around iconic sites of Central London. Fun for all ages & abilities. pic.twitter.com/sz3PpvxZf6