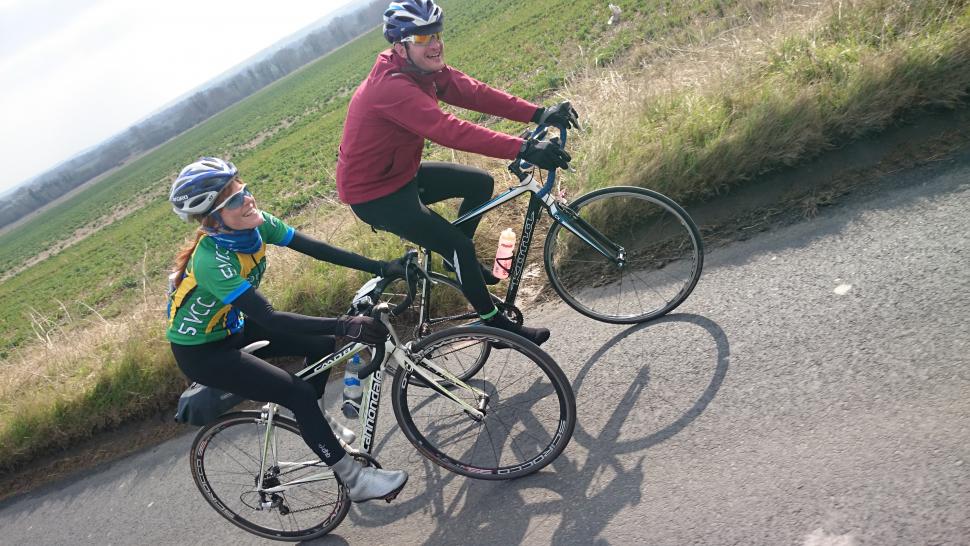 Columns ​in The Times and the Daily Telegraph are both peddling anti-pedalling rhetoric following calls from cycling campaigners to clarify rules regarding cyclists riding two abreast as part of a consultation, which closes at midnight today, into proposed changes by the government to the Highway Code.

I can’t keep abreast of what cyclists want is the headline of a column in The Times written by Sara Tor, while Telegraph motoring correspondent Paul Hudson’s article is titled, The moral superiority of cyclists has to stop.

> Why do cyclists ride two abreast?

In both cases, the principal object of their ire is the call by campaigners for the wording of Highway Code Rule 66, which currently reads, “You should never ride more than two abreast, and ride in single file on narrow or busy roads and when riding round bends,” to be clarified.

The Department for Transport (DfT) has proposed amending the rule to read that cyclists should “ride in single file when drivers wish to overtake and it is safe to let them do so. When riding in larger groups on narrow lanes, it is sometimes safer to ride two abreast.”

Both British Cycling and Cycling UK believe that the revised wording remains ambiguous and liaised with one another before formulating their own responses, which have minor differences between them but essentially seek to clarify the issue.

Both underline that riding two abreast is, at the moment, perfectly legal, but are calling upon the government to make the wording clearer in the interests of making the roads safer for all who use them, including motorists (as many videos in our Near Miss of the Day series attest, motorists overtaking cyclists when there are vehicles approaching from the other direction is a regular hazard that puts all parties at risk).

You should be considerate of the needs of other road users when riding in small or large groups. You can ride two abreast and it is often safer to do so, particularly in larger groups or when accompanying children or less experienced riders. Be aware of drivers behind you, allowing them to overtake (e.g. by moving into single file) when you feel it is safe to let them do so.

[Cyclists should] be considerate of the needs of other road users when riding with another and in small or large groups. You can ride two abreast and it is often safer to do so, particularly in larger groups or when accompanying children or less experienced riders. Switch to single file if you consider it safer to allow drivers to overtake.

In The Times, Tor accuses cyclists of “stamping their feet in an effort to get the highway code reworded” and, quoting Cycling UK’s suggested wording, adds “The proposal is actually being taken seriously and I’m astonished.”

Over at the Telegraph, Hudson insists he is approaching the issue from the point of view as “the viewpoint of keen cyclist and car driver” – although references to “apparently ‘road hogging’ cyclists,” “Lycra-clad” idiots and a “seemingly unwritten rule that the majority of cycling apparel is unremittingly black” suggests he is hardly sitting on the fence (or should that be saddle?).

“Of course, riding two abreast gives a brace of cyclists greater visibility,” he writes. “The proposals suggest that riding alongside instead of single file is the safest way to proceed unless it's considered safer to revert to line astern to allow drivers to overtake.

“However, that argument fails to take into account the moral superiority of many cyclists, who seem to view anyone in a car as violating their inalienable right to proceed in any manner that they see fit, with apparently little regard for other road users.”

He acknowledges the increased vulnerability of someone on a bike compared to “a person seated in a motorised tin box,” but adds that his “main concern is that such regulations will serve to further widen the divide between cyclists and drivers when we should all attempt to understand that we have an equal right to use the Queen's highway.”

His solution is that road users employ “common sense” and “consideration for others” – although, you don’t have to be a keen student of legal history to understand that failure to demonstrate either of those plays a large part in how the law, in its broadest sense, has evolved over the past few thousand years.

A more reasoned and balanced approach was given yesterday by Guardian journalist Peter Walker, speaking to LBC’s Nick Ferrari – a broadcaster not noted for his support of people who use bikes to get around (who are more likely than not to also hold driving licences, something that is often missed or ignored in mainstream media coverage of cyclists).

Walker underlined that neither British Cycling nor Cycling UK are trying to change the law, but rather have the wording clarified so that motorists are better informed over why cyclists may ride two abreast.

“At the moment, the rules are that cyclists are allowed to ride side-by-side if they want,” he explained.

“I think what Cycling UK and British Cycling are trying to do is not to change the rules, just to make it better known.

“You sometimes have that thing where, for example, if you have a group of club riders out on a Sunday morning, if they’re going down a long, straight road, it’s actually easier for drivers to go past them if they’re riding side-by-side.

“The other reason is, if you’re riding one abreast, there is a temptation often for drivers to try and squeeze past, like on narrow bends where there’s not the space, and particularly on country roads they will overtake, say on a blind bend, because they think it’s only one person.

“The argument is, and this is something which is already in the rules, you should overtake a cyclist, even a single cyclist, the way you would a car. So you’d go all the way to the other side of the road and give them enough room.”

Ferrari asked Walker what drivers should do if they wanted to overtake cyclists, but there was another vehicle approaching.

“Well in which case you need to wait, and that’s what the Highway Code actually already says now, so no-one is saying that the law should be changed,” Walker replied.

“Because there is a bit of a mix-up with this, because people think that if cyclists are riding two abreast, they’re breaking the law, which they’re not.”

The consultation into the proposed changes to the Highway Code closes at midnight tonight and Cycling UK has created an online tool to enable you to reply to it quickly and easily, which you can find here.