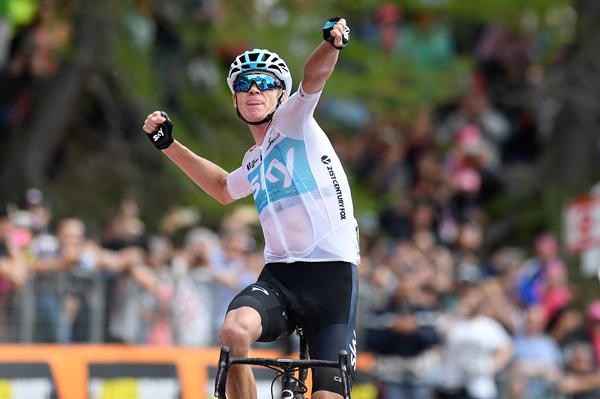 When we think back on the last 10 years of racing, there have been some huge rides through the mountains. From Andy Schleck’s win on the Col du Galibier, to Alberto Contador’s final Vuelta win on the Angliru and Annemiek Van Vleuten’s massive World Championships win where she solo’d across most of Yorkshire.

But the users of myCols app voted Chris Froome’s 80km solo escape on stage 19 of the 2018 Giro d’Italia as the most heroic of them all.

We loved this race which was lit up by an attack-minded Simon Yates who sat in the Mallia Rosa going into the final two days of racing. Froome had a huge gap to make up on his fellow Brit and also had to leap-frog Team Sunweb’s Tom Doumoulin.

Unsurprisingly, Froome also loved this victory saying that “this victory is completely unique for me. I’ve never attacked that far from the finishline. It’s just something you don’t see very often any more in professional cycling. It’s been a couple of decades since we saw someone win a Grand Tour in that kind of fashion.”

Going into the stage, Froome was 3’22” behind Yates thanks to a terrible start when he crashed during the opening TT recon. “I knew it would take something absolutely crazy to turn the race upside down. And it would be a kind of move, almost a suicide move, it would be all or nothing. The idea of going solo 80km out was a decision I made in the morning before the race. I sent a message to my coach, Tim Kerrison, and just said to him: ‘It’s a bit of a crazy move, but what do you think if I went on the Colle Finestre at 80km out?’ It’s only three climbs, two descents. It’s going to be a time trial and behind, they are going to have to sort out a really good chase if they wanted to catch me.”

Froome and his boss Dave Brailsford put a lot of the day’s success down to their fuelling strategy. The team’s nutrition sponsor, Science In Sport made a video detailing the day.

“It was going to be one of the biggest days on the bike in my life in terms of energy expenditure, so I had to think about how much fuelling I needed to get in before the race and then again once I got into the race. How often do I fuel and on what? Basically going at a time trial as hard as I could. Certainly there where doubts, it’s something that could go completely wrong”

Read our review of Science In Sport Beta Fuel here

Froome’s ride is undoubtably brilliant. But if you’re missing racing, then have a little watch of these other long solo escapes.

There’s Van Vleuten’s ride through Yorkshire that netted her the Rainbow Jersey.

Or how about Alberto Contador finally winning a stage in his final Grand Tour, la Vuelta a Espana.

My favourite? Andy Schleck’s win atop the Col du Galibier. He went on to lose the Tour to Cadel Evans in the final day’s TT. That stage also saw Voeckler barely clinging onto his lead, the hopes of France resting on his shoulders.

Which amazing rides from the last 10 years did we forget? Post them in the comments below.