Biniam Girmay has been forced to abandon the Giro d’Italia due to an eye injury sustained in a freak podium incident, moments after becoming the first Eritrean and black African rider to win a grand tour stage.

The 22-year-old Eritrean, who rides for Intermarché–Wanty–Gobert Matériaux, made cycling history yesterday on stage 10 of the Giro to Jesi, beating rival Mathieu van der Poel in a pulsating sprint to the line to take his country’s first ever win at one of the sport’s three-week-long stage races. 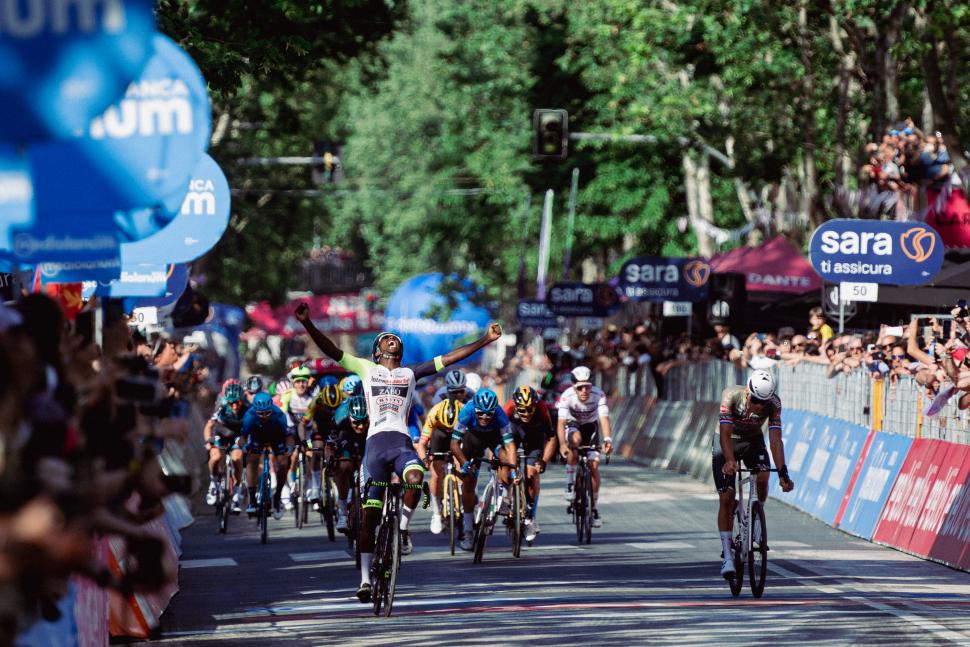 Girmay had little time to savour what will prove a watershed moment for professional cycling, however.

As he celebrated on the podium, the cork from a particularly obstinate prosecco bottle struck him in the eye, causing the Eritrean to visibly wince as he received the adulation of the tifosi.

The obligatory podium prosecco bottle has proven a continuous source of trouble at this year’s Giro, a cork narrowly missing Van der Poel’s eye in a similar incident following the race’s opening stage.

After the painful looking mishap, Girmay skipped the post-race press conference to head directly to a nearby hospital, where he was released hours later with a bandage covering the injured eye, raising considerable concerns about his future at the Giro.

820 pm @GrmayeBiniam has just left hospital in Jesi #Giro105 His start in stage 11 looks unlikely. In the morning the team will communicate about it 🤞 pic.twitter.com/WvBC5Z2ZJL

Doctors at the hospital later told Eurosport that while the Intermarché rider struggled to see in the moments after the cork struck his eye, his vision soon returned without complications, allowing him to celebrate with his teammates later that evening.

However, Girmay and his team confirmed this morning that cycling’s newest superstar will not start stage 11 of the Giro as a precautionary measure.

“Thanks to my team, to everyone – yesterday was unbelievable,” Girmay said in a social media post released this morning.

“The team did almost 99 percent, from the beginning to the finish. I’m really happy with the team, they are super motivated, before, during and after the race. We really help each other, support each other, there is a really good atmosphere. This victory is not only for me, it’s for all the team, who support me and push me.

“Yesterday when I arrived from the hospital in a bad moment, I enjoyed it a bit with my teammates, the staff, everybody.

“I’m also happy now – I was a bit sad about what happened with the champagne. When I came back to the hotel, everyone was super happy, though they were a bit afraid. But when I looked okay, we really enjoyed ourselves.

“But today I will not start the race because my eye still needs some rest, to give more power to the eye. So, I’m looking forward to the rest of the season. I am okay now. See you all soon.” 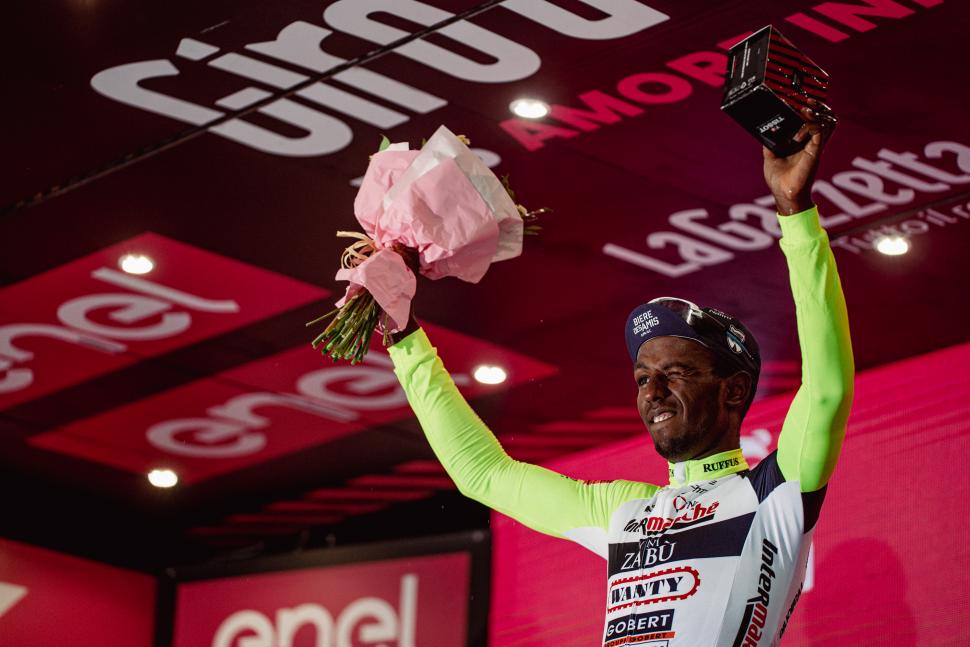 According to Girmay’s provisional schedule, he is set to race a string of one-day races over the summer, along with the Tour of Poland, as he prepares for the road world championships in Wollongong. However, following his early withdrawal from the Giro, speculation has increased about a possible Tour de France debut.

Girmay’s abandon this morning – though rather symptomatic of pro cycling’s fixation with cruelty – marks an anti-climactic end to what will surely be only the first chapter of one of the sport’s greatest stories.

The 22-year-old Eritrean has burst onto the scene this season, his debut year in the pro ranks, winning Gent-Wevelgem in March – the first African victory at a prestigious Belgian classic – to add to his silver medal at the 2021 U23 world road championships.

The Intermarché-Wanty-Gobert Matériaux rider raised a few eyebrows when he turned down the chance to ride the Tour of Flanders in order to prepare for his first grand tour – a decision that has been vindicated (and then some) at the Giro, where he was knocking on the door throughout the first week and a half, taking five top fives, before yesterday’s sensational - and historic - win.

The image of a defeated Van der Poel – a bona fide superstar of the sport – giving his young rival the thumbs up as the pair crossed the line into Jesi will be written into not only cycling folklore, but that of Eritrean and African sport.

Girmay’s breakthrough success on the sport’s biggest stages follows in the wheel tracks of fellow Eritreans Daniel Teklehaimanot, who wore the King of the Mountains jersey at the 2015 Tour de France, and EF Education-EasyPost’s Merhawi Kudus, while Natnael Tesfatsion has also impressed at this year’s Giro for Drone Hopper, and was one of the first to congratulate his compatriot after the line. 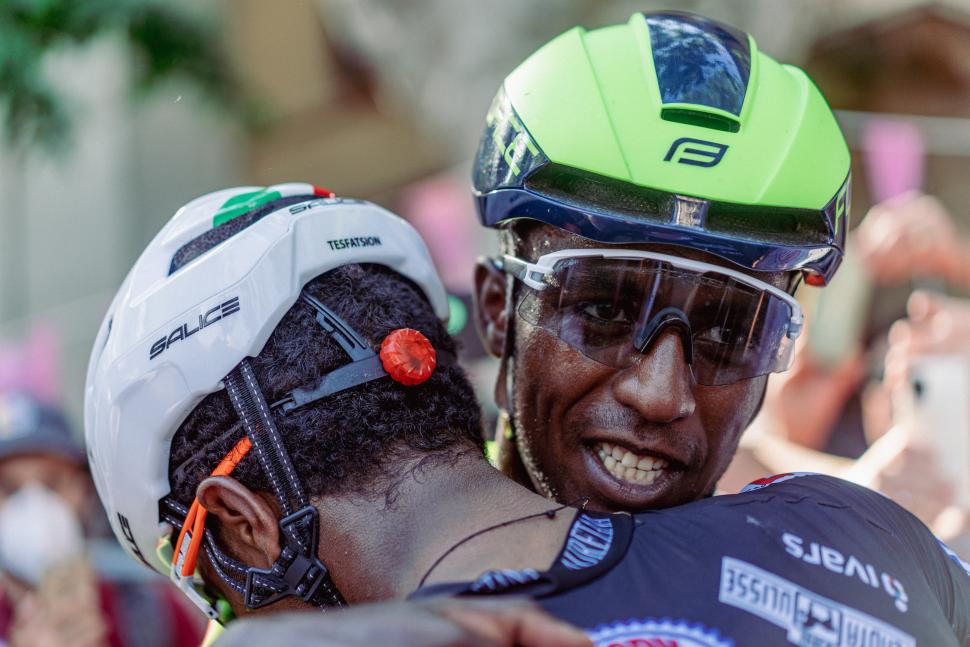 Yesterday’s stage also represents a watershed moment for professional cycling, which for over a century – with some, though very few, notable exceptions – has remained an almost exclusively Euro-centric, white, and insular sport.

Despite his misfortune on the podium, stage 10 of the Giro d’Italia certainly won’t be the last time Biniam Girmay – and Eritrean and African cycling – make history.