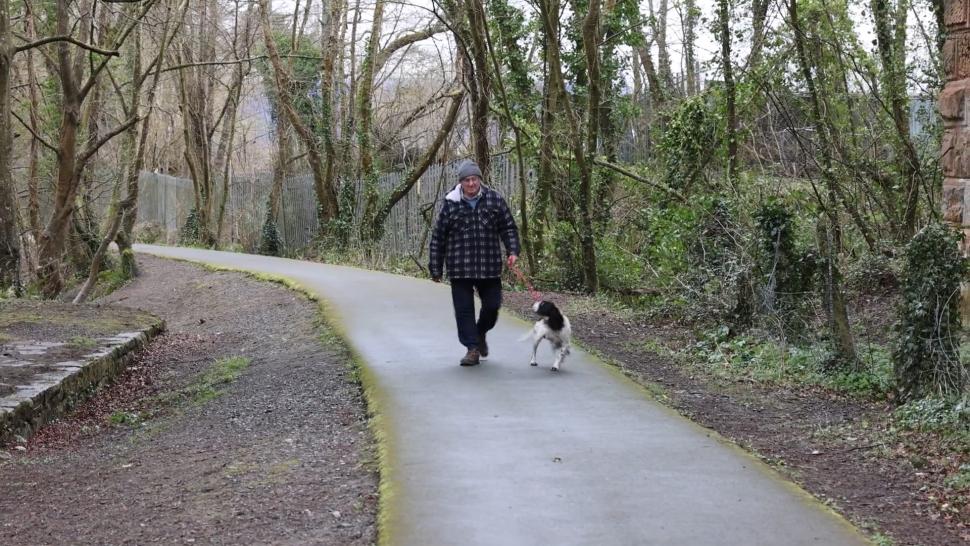 An 11-year-old springer spaniel lost its leg after it was struck by a cyclist, prompting calls to “consider others” while cycling alongside walkers – though some said shared-use paths “create too much conflict”
by Ryan Mallon

Cyclists have called for a “mindset shift” when riding on shared-use paths, after a dog’s leg was amputated following a collision involving a bike rider near Bangor in North Wales.

Yesterday we reported that Buddy, an 11-year-old springer spaniel, lost a leg after he was struck by a cyclist in Gwynedd. The dog suffered a badly crushed ankle in the incident, which occurred while being walked off-lead on the Ogwen Trail, part of the National Cycle Network's Route 82.

Bob Hutchinson said a cyclist “zoomed past” before hitting his dog, and questioned the “arrogant” attitude of some cyclists, who he says have made walking on the path “a frightening experience”.

The unfortunate incident has prompted some serious debate in the comments and on social media, as the cycling community attempts to answer the question: how can shared-use paths be made safer for everyone?

Readers were particularly divided over who was responsible for the incident on the Ogwen Trail.

“Dogs should be on leads on a shared path like that for their own protection and that of others, no question,” said Rendel Harris.

“However, looking on Strava I find there is a segment for that section of path, ‘Glasinfryn to Port Penrhym’, in which the KOM is 44km/h, the top eight are all 40 km/h plus, and the top 280 are all 30 km/h plus, so clearly a considerable number of cyclists are indeed being utter tools and ‘using it as a racetrack’.”

On the other hand, Rich_cb said: “Dog owners have a responsibility to other path users. The dog must be completely under control. If it is not and someone is injured as a consequence, then they are liable.”

Last month, a district council in Devon introduced a controversial new public space protection order which requires dog walkers to use leads shorter than a metre near cycle paths and highways, with the safety of cyclists cited as one of the reasons behind the rule.

However, Simon E argued that “it is the cyclist's responsibility to avoid the collision regardless of the supposed behaviour of the dog and its owner.

“The whole route is a shared facility, but walkers are there to relax and many won't expect something that moves considerably faster than other walkers and is almost silent.

“Regardless of what the Highway Code says, if you cycle along there and you assume people will move out of your way or anticipate your approach and immediately bring their dog under control then you are going to get a nasty surprise.”

Replying to Simon’s comment, TriTaxMan said: “So what you seem to be suggesting is that in a shared-use space that the users of the space who pose the most risk have the responsibility to avoid a collision regardless of the supposed behaviour of the more vulnerable user…

“So the next time I'm out cycling on the road I don't need to care what I do on the road because it’s the motorist’s responsibility to avoid a collision with me regardless of what I should be doing on the road.

“Last time I checked sharing is about all groups taking responsibility for their own safety and actions as opposed to thinking the other group will do it for them.”

Carior, a cyclist and dog walker, argued that no one has “any privileged right to use a shared path to the detriment of other path users”, and called on cyclists to remember that, on a shared-use path, “we are the high speed potentially dangerous users”.

They then advocated the following “simple rules” for cyclists and dog walkers to adhere to on shared paths:

“If you want to cycle on a shared use path/bridleway, you have to be responsible and be prepared to stop immediately if there's something unexpected around the corner, whether a trap, a downed tree, a family or a dog.

“It is your responsibility to be in control of your speed. Ultimately, I think you have to expect that people won't hear you and you may have to pass at quasi-walking speeds. If you are trying to "train" or "go hard" then you need to consider whether your route is appropriate for that and to be frank, I don't think a shared-use path is.

They continued: “If you are a dog walker on a path that you know is frequented by cyclists, then you have to be particularly aware of that. You need to be vigilant and responsible so that you notice when there is a bike coming and can appropriately instruct your dog, whether getting them to stay or calling them back as the situation calls for.”

Many readers said that cyclists should treat pedestrians on shared-use paths in the same way that they hope to be treated by motorists on the road.

“If I’m out on the road on one of my bikes, I hope that every artic, bus, car or motorbike would rather go into a hedge then wipe me out. I ride that way when around pedestrians, dogs and horses,” says Jimwill.

Sriracha commented: “If I as a cyclist badly injured a dog, or a child, I'd feel like shit. Placing the blame would not assuage my feelings.

“Therefore, on a shared use path, where there are dogs, and children, running about, I ride cautiously. So far it has worked. I would not be one militating for dogs and children to be kept under ‘close control’ just so that I could be freed of the imperative to ride cautiously around them.”

On Twitter, Patrick wrote: “The very simple reality is that if cyclists refuse to acknowledge other path users by failing to slow down, they are demonstrating the same obtuse and arrogant behaviour of car drivers they moan about with whom they share the roads. Consider others.”

Mike Harrison went further and said that: “Cyclists need a mindset shift when on shared-use paths. We're used to being the vulnerable users on roads and having to fight for our space. On paths however, we need to be ultra-cautious around walkers/dogs. Doesn't matter if they're in the ‘wrong’, we need to not harm them.”

> "Everybody has to take greater care": Cyclists react to ban on long dog leads near cycle paths

Others focused on the design of active travel infrastructure in the UK, with Matt Smith claiming that “shared-used paths create too much conflict”.

He continued: “Give cycling dedicated space segregated from walking.

“In the meantime, respect the guidelines for shared use paths. Put your dog on a short lead. Cycle slowly around people and dogs, use a bell and always be prepared to stop.”

Chrisonatrike also called for a complete overhaul of both shared paths and active travel infrastructure in general: “Immediate action for the UK would be making [shared paths] in towns/cities at least twice as wide – or as wide as possible. Most UK ones are barely the minimum for bikes never mind bikes and pedestrians. Then very clearly mark separate cycling and pedestrian areas.

“Initially this will of course be ignored by most people but will get them used to the next change which is: Taking space back from motor traffic/parking so we don't need shared-use paths.

“[Shared-use paths] are always conflicted because often there are very few/no traffic-free options for journeys by foot or bike, for pleasant walking, for taking your dog out, where you're not worried about the kids running in front of a bus.”

Seventyone was a touch blunter in their appraisal: “Shared-use paths are a bit rubbish. What a revelation!”