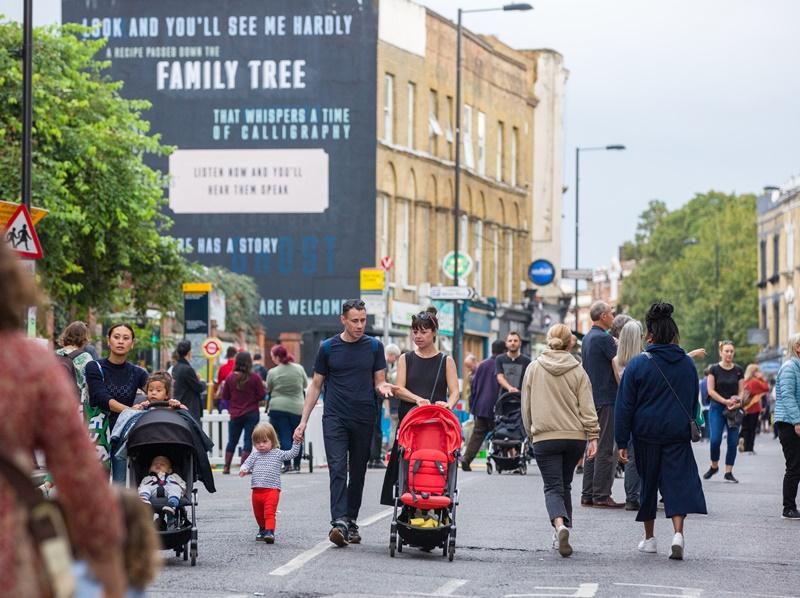 Hackney’s low traffic neighbourhoods (LTNs) have not resulted in higher traffic levels on five nearby A- and B-roads according to early analysis by Transport for London (TfL).

Cycling UK recently expressed concern that the “loudest voices” are having undue influence on decisions relating to new cycle lanes with claims that a scheme is somehow exacerbating congestion the go-to argument for those against new infrastructure.

Early evidence from five traffic monitoring sites indicates that new LTNs have not resulted in a rise in traffic on nearby main roads.

Councillor Jon Burke, the Cabinet Member for Energy, Waste, Transport and Public Realm, conceded it was not easy to disentangle what was happening on the roads from the coronavirus crisis, but said he nevertheless considered the early findings encouraging.

At the Mare Street junction with Brenthouse Road, numbers of vehicles have remained largely below 2019 levels throughout the year, with a further drop after the introduction of the London Fields low traffic neighbourhood.

At the A10 (Kingsland Road) junction with Richmond Road, traffic levels are largely in line with those from last year, with no obvious impact caused by the introduction of the London Fields low traffic neighbourhood .

At the A10 (Stoke Newington Road) junction with Walford Road, traffic has remained below 2019 levels, with no obvious impact caused by the introduction of the Hackney Downs low traffic neighbourhood or filters in the Walford Road area.

On Homerton High Street, traffic levels remained broadly in line with 2019 levels. After a slight increase following the introduction of traffic filters in the area, traffic dipped back below 2019 levels in October.

On Albion Road, traffic levels were already higher than 2019 at the start of the school-term, but then dropped to near 2019 levels after the introduction of traffic filters in the Walford Road area and on Clissold Crescent.

Burke said the council would be installing over 270 automatic traffic counters this month to monitor traffic over a 7-day period and would repeat the exercise early in the new year.

It will also be installing around 20 permanent, continuous counters on major roads to supplement existing TfL counters to monitor longer term trends.

“While we’re encouraged by these initial findings on five key main roads in the borough – which show no significant change in traffic levels after the introduction of the new low traffic neighbourhoods – there is more work to be done to measure traffic levels on other roads to identify if changes have taken place. That’s why we are also rolling out more monitoring equipment to locations across the borough that do not currently have it.

“In recent days, a number of traffic counters and cameras across the borough have been vandalised, causing tens of thousands of pounds of damage, by people seeking to overturn the decisions of councillors elected to run the borough by its residents.

“We cannot obtain the information we need about LTNs when these acts of outright criminality take place, yet this information is essential to measuring the performance of LTNs. We will now be working with the police and on design solutions that seek to address these very attacks on public property.

“I’d urge residents to continue to have their say at rebuildingagreenerhackney.commonplace.is so we can continue to adapt and improve schemes, while creating cleaner, greener neighbourhoods and supporting local people to walk, cycle and shop locally during the pandemic.”

I predict that on, or around, 12 December, my Twitter account, @Nextdoor_UK, and Facebook will be ablaze with puce-faced drivers claiming traffic jams never existed before Low Traffic Neighbourhoods...🔮 pic.twitter.com/JDlPO8FqkX