A cyclist was injured in a hit-and-run road rage attack after a motorist allegedly took exception to the bike rider pointing out that he shouldn’t be using his phone while driving. The driver then sped after the cyclist before mounting a pavement and knocking the man from his bike.

Police in Poole are currently investigating the shocking incident, captured on a nearby house’s Ring doorbell device, which led to the cyclist being treated in hospital for injuries to his knees, elbow and shoulder, the Daily Echo reports.

Don Codman told the newspaper that he was cycling home from work at around 5.20pm on Tuesday when he noticed a driver using his phone while in a queue of traffic.

“The cars were crawling along up to the lights. I was going normal pace, and the car went ahead [as the traffic moved],” he said.

“I went past again [when the traffic stopped], and the driver was still on their phone.”

The cyclist, who has been struck by distracted motorists in the past, says that he then tapped on the driver’s car window to inform him that he shouldn’t be on his phone while behind the wheel.

“I debated whether to say anything, but I stopped and tapped on the window. I was just carrying on normally, I was not aggressive at all,” he said.

According to Codman, as he continued on his way home along Herbert Avenue in Poole, he heard shouting, a car engine revving, and the beeping of a horn from behind.

After moving onto the pavement – where he felt he would be safer – the motorist then drove past him before stopping. As Codman rode by on the footpath, in an attempt to avoid a confrontation, the driver restarted his car and began to pursue the cyclist.

Codman continues: “I wasn’t being aggressive, but the driver flew off the handle. He was clearly using his car as a weapon.”

In the footage above, the motorist can be clearly seen turning onto Sancreed Road at speed, mounting the pavement, before hitting the cyclist from behind and driving off.

Codman, who sustained some nasty scrapes and bruises to his elbows and knees in the collision, was treated in hospital for his injuries, while a passer-by who witnessed the incident phoned the police. 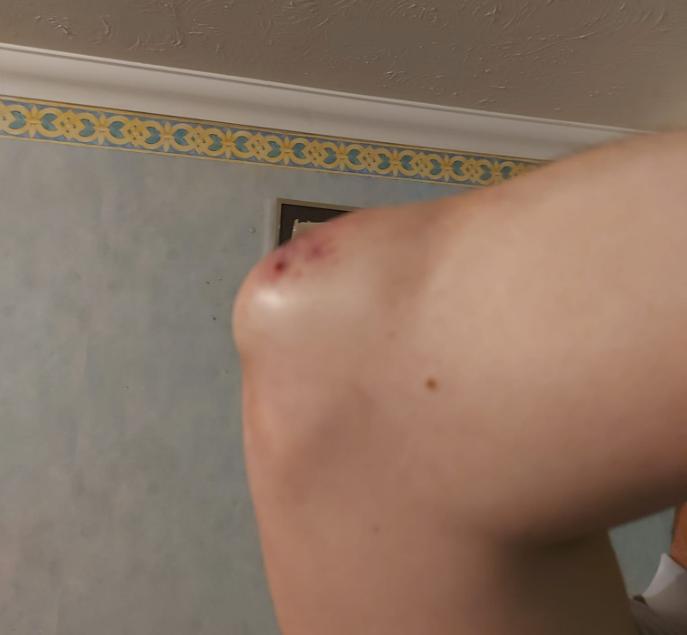 Despite the shocking hit-and-run, Codman says the incident won’t put him off commuting to work by bike.

“Everyone knows there are idiots about, so who knows what will happen. For him to react as he did was just totally wrong.”

A spokesperson for Dorset Police said: “We received a report at around 5.20pm on Tuesday 22 November 2022 of a collision involving a dark blue hatchback car and a cyclist in the area of Sancreed Road in Poole.

“It was reported that the car failed to stop at the scene of the collision. The cyclist sustained injuries that were not believed to be serious. Enquiries into the incident are ongoing. No arrests have been made at this time.”

“This was a very distressing incident for the cyclist involved and we are carrying out a number of enquiries into this matter,” Police Constable Matthew Batter told the Daily Echo.

“I would urge anyone who witnessed what happened or may have captured anything of relevance on dashcam footage to please get in touch.

“I would also urge the driver involved to please do the right thing and come forward so we can take your account.”

Witnesses or anyone with information relating to the incident have been asked to contact Dorset Police through the force’s website, or by calling 101, quoting occurrence number 55220189695.