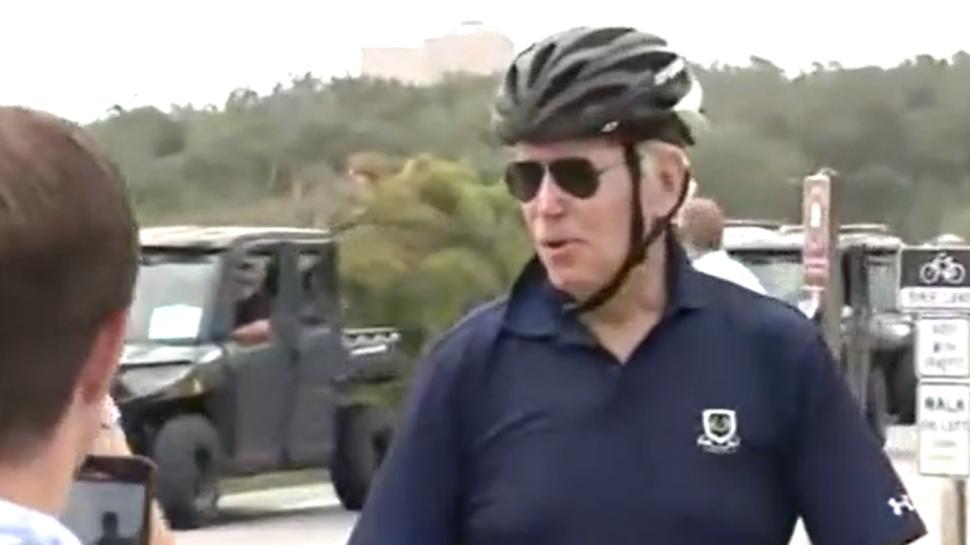 Joe Biden is back cycling... minus the toe straps

"It wasn't me": The President joked after reports of a security guard crashing during the ride...
by Dan Alexander

There was reportedly one faller as Joe Biden returned to life on two wheels following his toe strap crash last month, but it was not the President — who revealed he has now removed the dreaded pedal accessory from his bike.

A following security guard was the one to hit the deck this time, prompting Biden to channel his inner Shaggy: "It wasn't me".

Biden hit the headlines in June for his slow-motion fall while out for a spin with wife Dr Jill Biden near their home in Rehoboth Beach, Delaware, which even prompted former President Donald Trump to mock the current White House occupant with a spoof golf video. All very 2020s...

Anyway, Biden returned to the scene of the GC-ending fall and told the gaggle of reporters and photographers that watch his every move: "I want you all to know and important thing. I took off the toe clamps." No wonder he fell if they're toe clamps...

Pictures from the Associated Press, published in the Daily Mail, show the President now using a simple flat pedal.

Last month, Biden fell when he stopped to greet a crowd wishing him "Happy Father's Day".

Unfortunately, the 79-year-old struggled to wrench his foot from the toe strap, causing him to unceremoniously fall to the ground.

He was quickly back to his feet before blaming the "toe cages" for the tumble and insisted he was "good" before addressing developments concerning gun legislation and remounting to catch up with his wife.

Biden isn't the first president to fall off their bike while in office. In 2005, George W Bush – a keen mountain biker – crashed while riding in the grounds of a Scottish hotel hosting the G8 summit.

Unlike Biden, Dubya was said to be travelling at "a pretty good speed" at the time of his fall and suffered a minor ankle injury, as well as scrapes on his hands and arms.