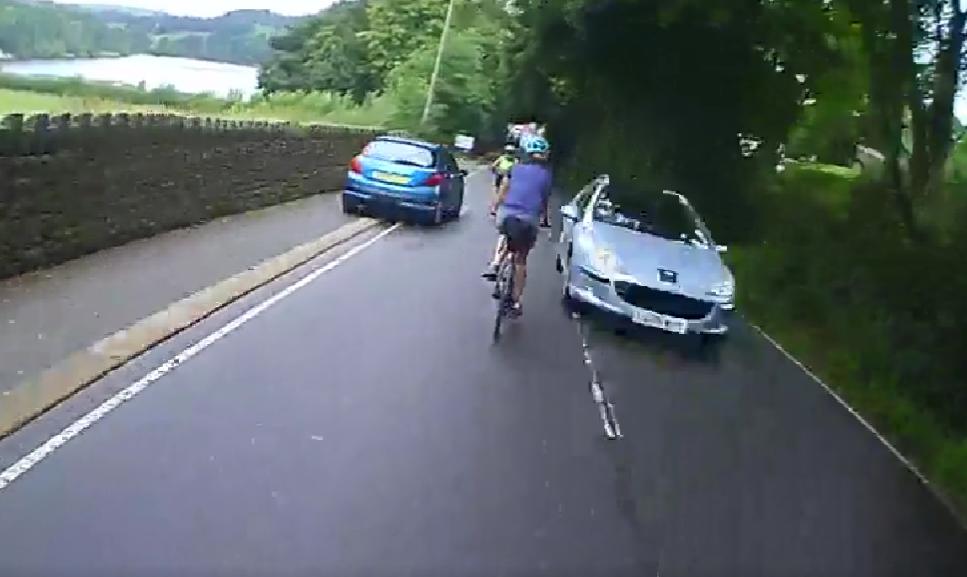 Last week our Near Miss of the Day 752 showed footage released by Sheffield North West Neighbourhood Policing Team, in which an approaching driver passed a group of cyclists too closely, resulting in a £417 fine and five penalty points.

The force added that "if anyone thinks this is an acceptable manner of driving, let this be your warning". However, despite the police, Crown Prosecution Service, and court finding fault with the driving, the footage has been reported less definitively by many media outlets who have since shared the video.

> Near Miss of the Day 752: “If anyone thinks this is an acceptable manner of driving, let this be your warning,” say police

A quick search of news stories relating to the incident reveals several written from the angle of the video "splitting opinion" or the punishment being controversial.

Yorkshire Live published one such article headlined: "Sheffield driver fined £417 for getting too close to cyclist as punishment splits opinion", before a follow-up piece went live this morning, titled "Angry drivers say 'cyclist to blame' as Sheffield motorist hit with £417 fine for overtaking bike".

Likewise, The Scottish Sun opted for: "Driver fined £400 for being ‘too close’ to cyclists on other side of country road – but it has divided opinion", while Manchester Evening News asked "Do you think that this driver deserved his fine or not?"

Most eye-catchingly, however, was The Telegraph's coverage, which warned of "the cycling wars taking over the countryside", and compared January's Highway Code changes, brought in to better protect vulnerable road users, as feeling like a "relegation to serfdom on the streets" for "miserable drivers".

Writer Harry de Quetteville said there had been a dispute between motorists and cyclists about who was at fault and "far from settling the issue, however, the film inevitably inflamed the spat between fans of four wheels or two". 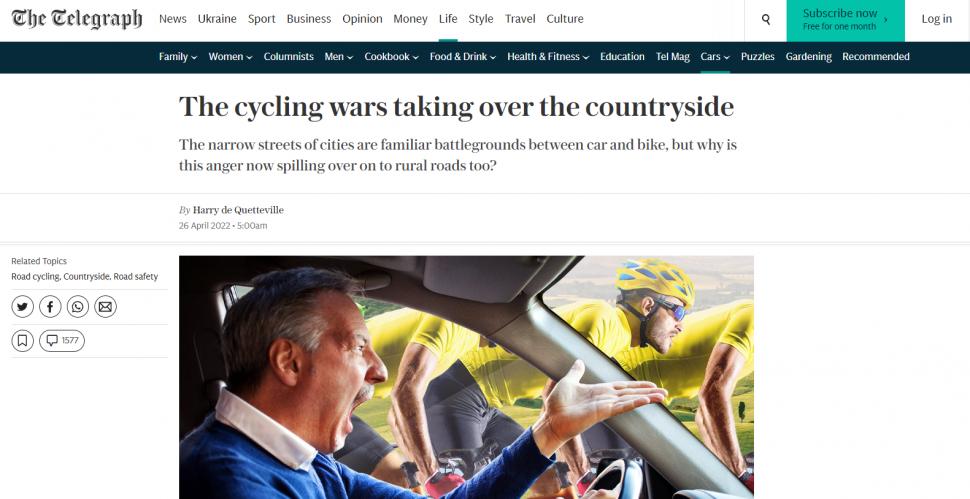 Part of the "digital collision" over videos like the one from Sheffield, he argues, is: "Because, according to the new Highway Code, there is indeed a new hierarchy of culpability, with cars one up from the bottom (above only lorries) and cyclists one down from the top (one down from pedestrians). It is a pecking order based, logically enough, on the vulnerability of potential victims.

"But for miserable drivers already sucking up rampant petrol price rises, never-ending (or never beginning) roadworks, and general gridlock, the result can feel like relegation to serfdom on the streets. Gone are the princely postwar dreams of independence behind the wheel, replaced by demonisation as a manic pedestrian – or planet-killer. It all seems a bit unfair."

Elsewhere in the piece, De Quetteville, without nuance, says the new Highway Code encourages cyclists to ride two abreast, or in the middle of the road.

The Highway Code actually states, as per Rule 66:

Inspector Kevin Smith, lead of the Sheffield Northwest Neighbourhood Policing Team, commented on our story to explain how the close pass case played out: "I can't take all the credit though I was just sent the footage, realised it was very close to the NIP (Notice of Intended Prosecution) date and sent officers out to personally serve the S59 warning and the NIP.

"Chap responsible clearly thought he had done nothing wrong and took it to court.  The courts agreed with me and not the driver. By putting the videos out there I hope there is a bit of a database of what constitutes an offence to encourage other forces to have confidence in prosecuting videos like this.

"I have issued hundreds of TORs and very few elect to go to court. When they do, and the court agrees with my assessment, that is worth sharing as validation  especially where there is video evidence. Anyway, the Telegraph has now gone with it."

The "splits opinion" headlines surrounding last week's video are not the first time the national press has taken an interest in issues of cycle safety this year.

Following the aforementioned Highway Code update in January, two major newspapers wrongly claimed drivers face fines if they do not use the Dutch Reach technique when opening car doors.

In the same week, The Telegraph also published a provocative opinion piece titled "Pedal-pushers have taken over British roads – even as a cyclist, I think it’s time to rein them in".