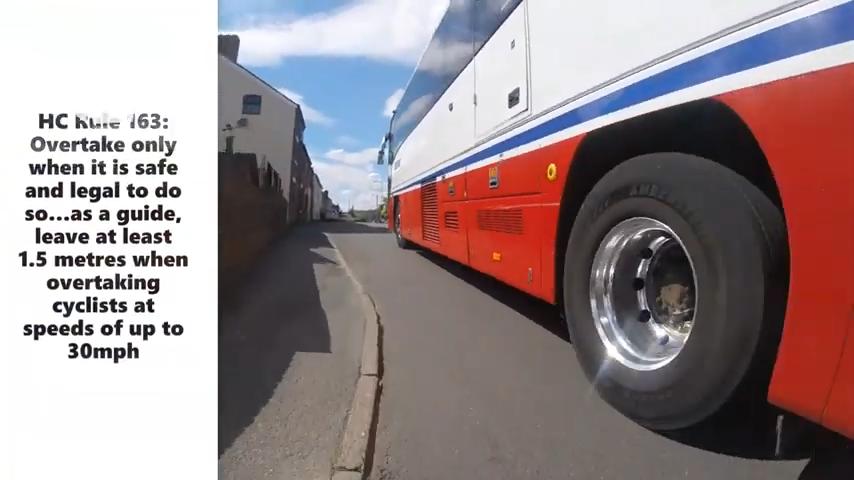 Our regular series featuring close passes from around the country - today it's Staffordshire...
by Simon_MacMichael

A coach driver who overtook a cyclist on a bend and came within inches of hitting him with the rear of the vehicle is the star of our latest Near Miss of the Day video – although the rider on the receiving end says he was “more than a little surprised” that police did nothing more than write to the firm that operates the coach to point out the standard of driving.

“This took place in Tean (Staffordshire Moorlands) on A522 Cheadle Road, and was submitted to Staffordshire Police,” said road.cc reader Jase, who shared the video on YouTube.

“As I turned into the road, and knowing the road would have parked vehicles (outside the chippy!) I accelerated to give myself some room, I figured that there was a vehicle behind me as a car on the opposite side of the road had stopped; knowing that the road curved to the left, what I didn’t expect was for them to attempt an overtake on the bend.

“I was a little taken aback that it was a coach attempting the overtake, and fear started to grow when – as they rounded the bend – physics dictated that the back end started to drift towards me. You could probably hear this given my poor language (something interestingly Staffordshire Police didn’t comment on), but I think the video speaks for itself as to why I swore!

“Having submitted to Staffordshire Police I was surprised that they hadn’t got back to me within their six-week window, so I requested an update. It was then that I was told that the officer ‘wrote to the manager at the company regards the driver’s driving standard’,” Jase continued.

“I was more than a little surprised by this (in)action, especially when you consider that the driver is a – ahem – professional driver. They broke multiple Highway Code rules, and I have no faith that the manager at the company will do anything – given the lack of livery on the coach, I’m not able to trace who the company is.

“I’m now considering taking this further with Staffs Police, so would be curious to see what other readers think,” he added.

Subscribe
Near Miss of the Day
NMotD coach
NMotD Staffordshire