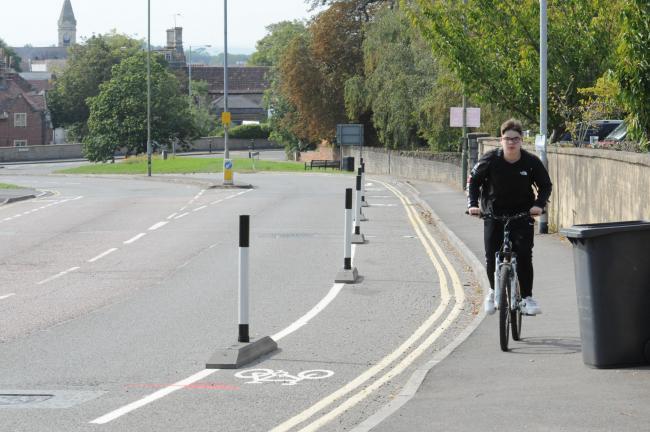 Tony Pearce, a former chairman of Trowbridge Town Council, has criticised the installation of a new £480,000 cycleway and footpath scheme in the town, describing the plans as a “vanity project, worthy of a bearded, sandal-wearing, nut-munching, eco-mentalist.”

The work on the Hilperton Road will replace a temporary cycle lane that was installed during the pandemic with a longer, wider, segregated path for cyclists and pedestrians. Signal-controlled toucan crossings will be installed as part of the plans, and road surfacing works will also take place.

The project, which Wiltshire Council says will be mostly funded by housing developer contributions, was given the green light after a public consultation which took place in December 2020 to determine the level of support for making permanent the temporary cycling and pedestrian measures introduced during the pandemic.

Of the 1,724 responses received during the consultation, 534 specifically commented on the Hilperton Road scheme, with 67 percent of those stating their support for permanent cycling infrastructure in the area.

But Tony Pearce, a former chair of the council’s environmental committee, says there has been no attempt by the council to consult residents who live on the road or to “take a census” of bike and pedestrian traffic to “justify the need” for the project.

Referring to the 357 people who voted in favour of the scheme during the public consultation, Pearce asked the Wiltshire Times: “What is Wiltshire Council doing spending £480,000 to satisfy the needs of less than one per cent of the town’s population?”

Pearce also criticised delays to the road works – which the council says are down to a lack of availability of resources and current low temperatures – and claimed that increasing the width of the cycle lane and installing new traffic lights would hinder the response time of emergency vehicles on the road.

“The whole episode smacks of a decision of someone at officer level at Wiltshire Council seeking to carry through a vanity project, worthy of a bearded, sandal-wearing, nut- munching, eco-mentalist,” the former councillor said.

“The [council’s] lack of openness is worthy of a Stalin or even the more recent Chinese paranoia about any inquiry into the Wuhan laboratory. This should surprise no one, however, as Wiltshire Council has what is known as ‘previous form’.”

Responding to Pearce’s criticism, Wiltshire Council’s Cabinet Member for Transport, Mark McClelland, said that the emergency services were statutory consultees throughout the planning process and that the carriageway (which will be reduced to a minimum of six metres at its narrowest point) aligns with design guidance on road widths and is suitable for the passage of large vehicles.

“The new walking and cycling facility on Hilperton Road in Trowbridge will help to make it easier for people to leave their cars at home for those shorter journeys, improve safety for all cyclists and pedestrians who use that route, and improve the route to the town centre and cycle network connections,” says McClelland, who dismissed claims that the scheme is a ‘vanity project’.

“It will help our residents to live healthier lives, reduce the number of vehicles on our roads, and lower carbon emissions and improve air quality, which will be particularly beneficial, easier, and safer for parents and children travelling by foot, bike or scooter to the schools in the area.”