A shameless thief was captured on CCTV stealing a bike from inside a cancer centre, while its owner was undergoing treatment.

CCTV footage shows the thief walking into Guy’s Cancer Centre in London on Tuesday while holding a phone to his ear.

After briefly exiting the building for a short period, he returns and heads straight to a bike, which is locked inside the entrance. Within seconds the thief can be seen riding the bike through the automatic doors.

The bike, a Specialized Diverge gravel bike with Shimano GRX Di2 worth around £5,000, is owned by Charlotte Montague, a sponsorship, marketing and media manager at Hotchillee, the organisers behind the London-Paris cycle tour.

Charlotte, who was having an emergency scan on her brain at the time of the robbery, posted images of the bike and culprit on social media, saying the lock “was gone within a moment”.

Charlotte was diagnosed with stage four bowel cancer in 2018, and after nine months of chemotherapy was declared cancer free. However, the disease returned in December and has spread to her liver. She is currently undergoing more chemotherapy and is scheduled for surgery next month.

“I was in the cancer centre on Tuesday having an emergency scan on my brain as my oncologist was worried that it may also have spread there as I've been getting bad headaches,” she told road.cc.

“It was such a sunny day and cycling makes me so happy, especially to appointments as it feels like such a f**k you to cancer, so I rode in.

“I left the bike inside, chained up, under a CCTV camera, in front of a security desk. I normally never leave it anywhere, but it felt like a low risk as it was somewhere I always feel safe.” 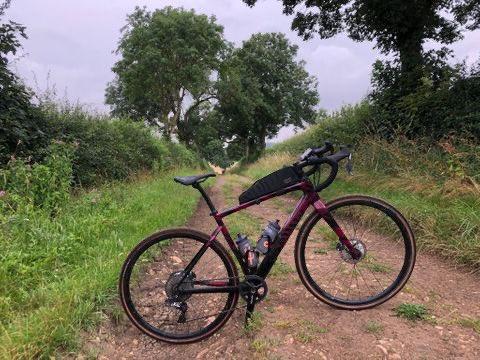 “Coming out after a really stressful morning to see the broken lock on the floor and my bike gone was like the floor coming from under me,” she said.

“Initially I thought it may be the security guards moving it because maybe it was in the way. But my heart sank as I was taken into the back room and he started to replay the footage.

“I knew as soon as I saw the guy loitering it was going to be him. It's unfathomable to me how someone could do this.

The stolen bike has a black and pink tiger print 56cm frame, and includes non-standard gold and purple Bontrager SPDs, a Deuter frame bag, Wahoo stem mount, and a ‘#aeightbikeco’ decal on the inside of the non-drive side chainstay. The frame serial number is: WSBC014014516R.

Charlotte’s employers Hotchillee, along with her sister, friends, and Sigma Sports, have helped raise enough money for her to replace her stolen machine, which she says “has been totally overwhelming and I am so grateful I can’t put it into words”.

However, Charlotte says she still “really, really hopes we can catch this guy. I got a crime reference number after reporting it to the police, and a follow-up email saying someone may be in touch, but to wait seven days. I've not heard anything yet.

“I'm searching all the second-hand sites regularly and have shared the video as much as I can, but am more hopeful about kicking cancer than I am about catching this guy.”

STOLEN today from inside @GuysCancer Centre whilst I was having treatment.

The Cancer Centre at Guy’s Hospital, located in King’s College London Guy’s Campus in Southwark, was opened in 2016 and treats over 6,500 cancer patients a year. It was also the first centre in Europe to offer radiotherapy treatment above ground level.

Though this particular robbery occurred inside the actual centre, bike parking facilities at hospitals have become a regular target for thieves in recent years, especially where security is lax.

Early last year, London’s University College Hospital (UCL) was hit with a spate of bike thefts, which London Cycling Campaign said were “completely preventable” and owed to the poor quality of bike storage facilities at the hospital.

One member of the campaign group posted a video on Twitter of bike parking at UCL, and claimed that “I can walk into this storage centre right here with all the angle-grinders and bolt-croppers in the world, and nothing would stop me.”

In 2020, two men were jailed for two years and 10 months each after stealing six bikes and assaulting an emergency worker at Queen’s Medical Centre in Nottingham.