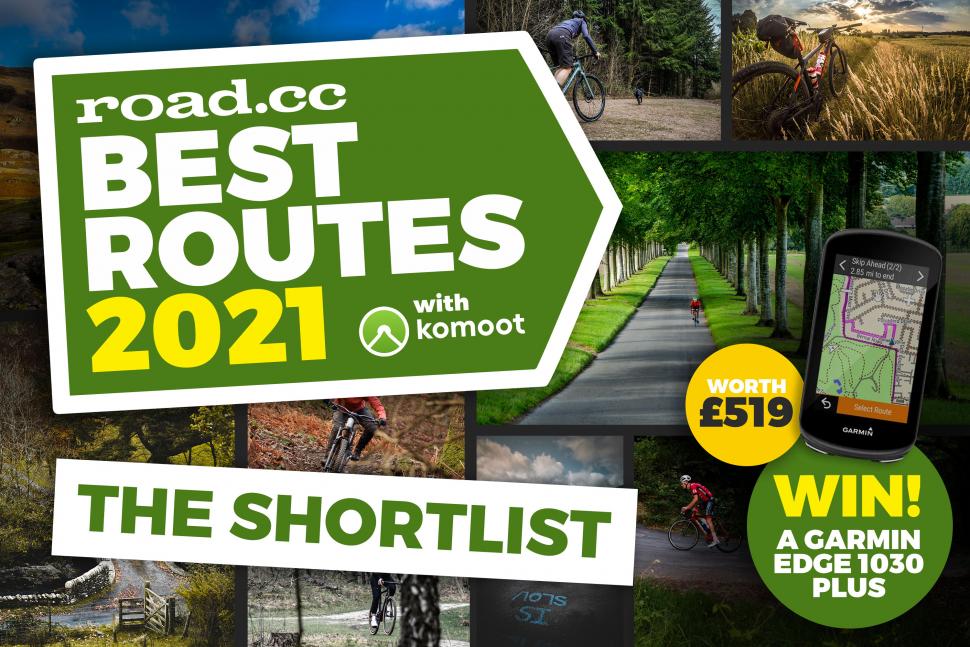 Your best cycling routes on komoot: shortlist of riders and routes in the running to win a Garmin Edge 1030 revealed!

We've whittled down all the routes you tagged us in on komoot, and have a fantastic shortlist to share with you. Even if you're not in the running, check them out for some route inspiration!...
by roadcc staff

We asked you to share your best routes with us on komoot for the chance to win a top-of-the-range Garmin Edge 1030... and you didn't disappoint, with plenty of epic routes uploaded. Unfortunately we couldn't pick 'em all, so here's our shortlist of routes from which the winning three will eventually be chosen. If any of them are local to you or you're visiting any of the locations soon, be sure to save them on your komoot profile and give them a go!

To remind you all of how this works, we've taken three road, three gravel and three mountain bike routes from all the entries in round 1 of the competition to make up our shortlist. When we eventually get our winners, all three will win a Garmin Edge 1030 Plus, and also get a free one year subscription to komoot Premium. Later in the year we'll also be teaming up with komoot to share some of our fave routes, so keep an eye on our YouTube channel.

Without further ado, here are the routes. Remember with your komoot account, you can go out and ride them yourself to see how epic they are!

Inspired by road.cc reader and komoot user KFarquharson's route on the east side of the Pennines, this 63.9km jaunt with 1,370m of elevation isn't for the faint-hearted.

The route is described as this: "Beautiful scenery, attractive villages and historical local industry, mix of some sharp climbs and longer ascents, moorland and hills. The ride can be extended out into Teesdale by turning up from St. John's Chapel over the tops and returning from Newbiggin. Adds yet more climbing, obviously.
If you're suffering you can bail out of the Westgate climb and just roll down the valley if your legs aren't up for the steep (15%+) kick back to Rookhope.

"You can also swerve the climb out of Rookhope to Stanhope and head to Eastgate to avoid the last climb. There are a series of pubs and cafes in the villages as you go round, and if you divert onto the principle road down the dale from Wearhead to Stanhope. The road down the valley isn't too busy to ride on from Wearhead to Westgate but the smaller road is more interesting."

This route  is inspired by Kiloran's rides in The New Forest: "This is the best of the forest and downs around Fordingbridge", he says.

"Barely a flat section, only 850m of climbing but you'll really feel it. Characterised by short sharp climbs with sections of 25% & 20%. 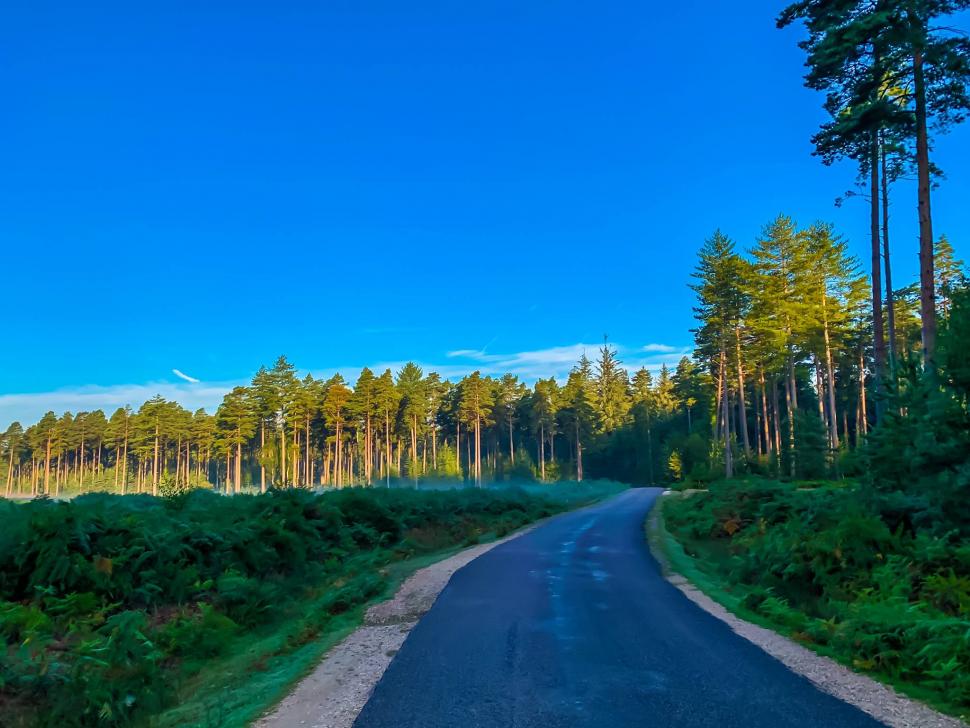 The southern loop is fast and flowing. Three very fast descents. Everything from rolling chalk downs, river valleys, deep forest, and open heathland. Plenty of options for cake - Hockey's Farm is about halfway and highly recommended for a cake stop. Definitely one for 28mm tyres and a decent pad, surfaces are, um, variable."

road.cc reader and komooter Stephen says this highland route takes in some of his favourite riding: "This was an amazing route with three great lochs and three big climbs. Weather was fantastic too. Starts in beautiful Crief and then heads to the south of Loch Earn, with Ben Vorlich on the left. The the first climb takes you up to Killin and on to the north side of Loch Tay, past the Falls of Dochart. "Lunch stop at Kenmore on the loch and a look at the boats. A super steep climb out of the village takes you up to Loch Freuchie. Its then a loop back down to Crief to finish. An amazing ride through gorgeous scottish countryside"

Matt reckons this 83km is relatively relaxed and flat and mostly traffic-free:

"Marriott's Way is a converted railway, on a mix of tarmac in the city, with gravel and sandy sections later, covering 26 miles to Aylsham. From Aylsham ride on gravel and dirt alongside the Narrow Gauge Bure Valley Railway to Wroxham, waving to the trains, full of tourists in summer, that pass you (maybe even give them a race). 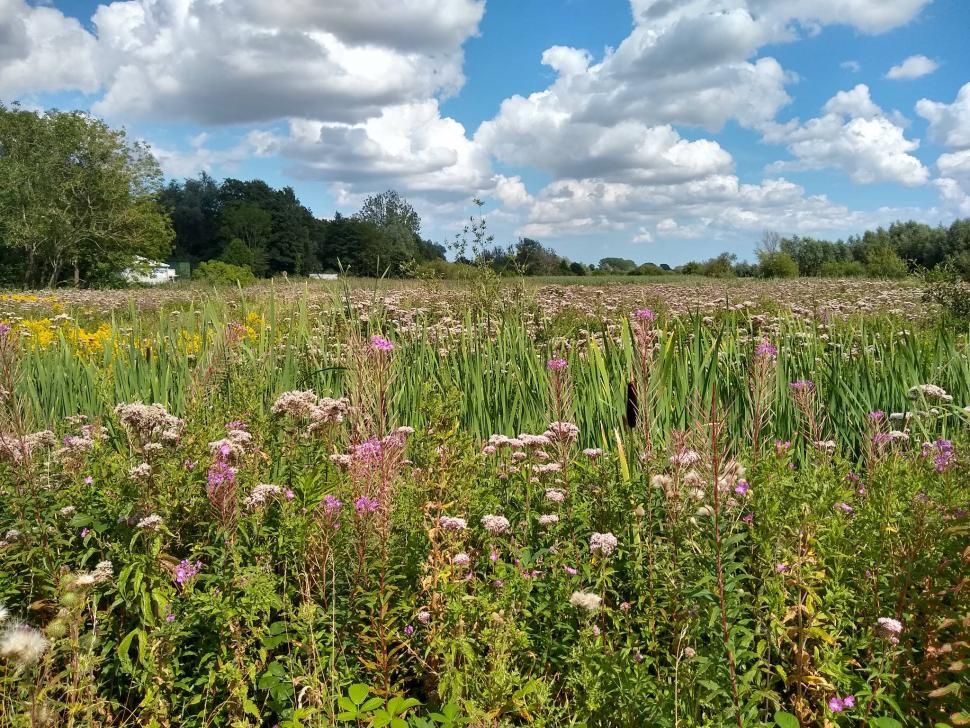 From Wroxham, the route picks up sandy tracks, quiet roads and tarmac cycle paths back round to the South of Norwich.

Lastly, pick up the third rail trail, the surfaced Lakenham Way which drops you back into the city centre for post-ride refreshments of your choice. Cafe stops are abundant: Whitwell Station, Reepham Station, lots to choose in Aylsham (Bread Source is a personal favourite), fish and chips in Wroxham, the Barn at Whitlingham and plenty of post-ride beer opportunities in Norwich."

This Derbyshire epic from road.cc reader and komoot user Gene is sure to take your breath away: "Are you in search of an epic gravel adventure with more highlights than a hairdressers convention? Then look no further! 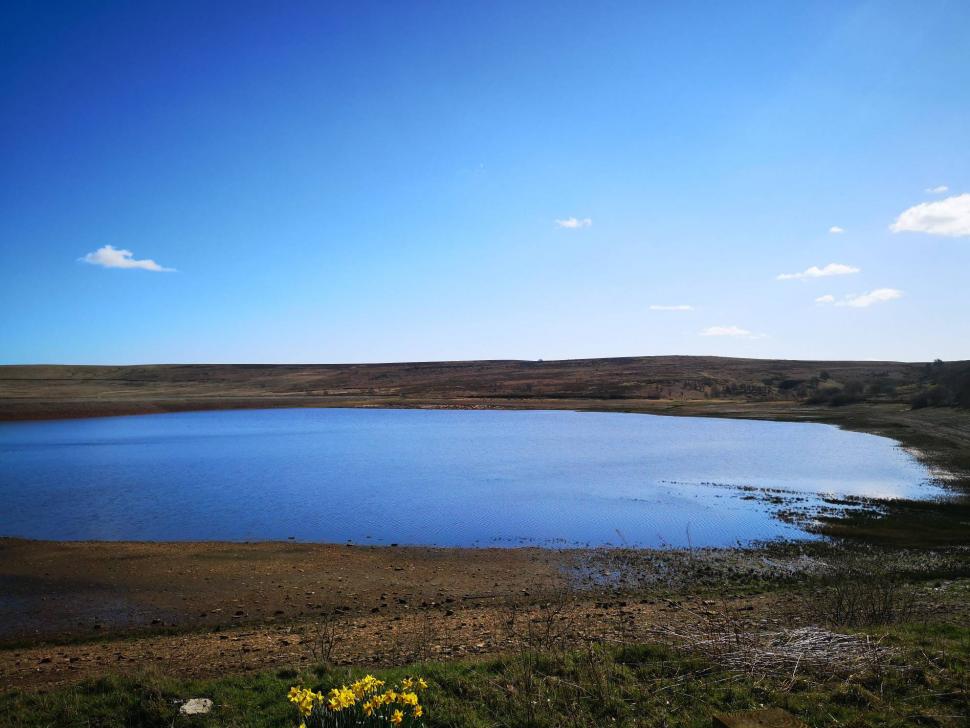 "This fantastic route in the heart of Derbyshire has it all, from ancient roads to tranquil trails and with its killer climbs and stunning scenery, it’s guaranteed to leave you breathless. It’s a great one day challenge; but if want to take your time and explore more of what the area has to offer, it’s perfect for this as there’s a number of campsites in the area, so give it a go."

This 84.7km ride takes in some of the best gravel and towpath routes around Bristol and the Mendips, with 1,070m of climbing. 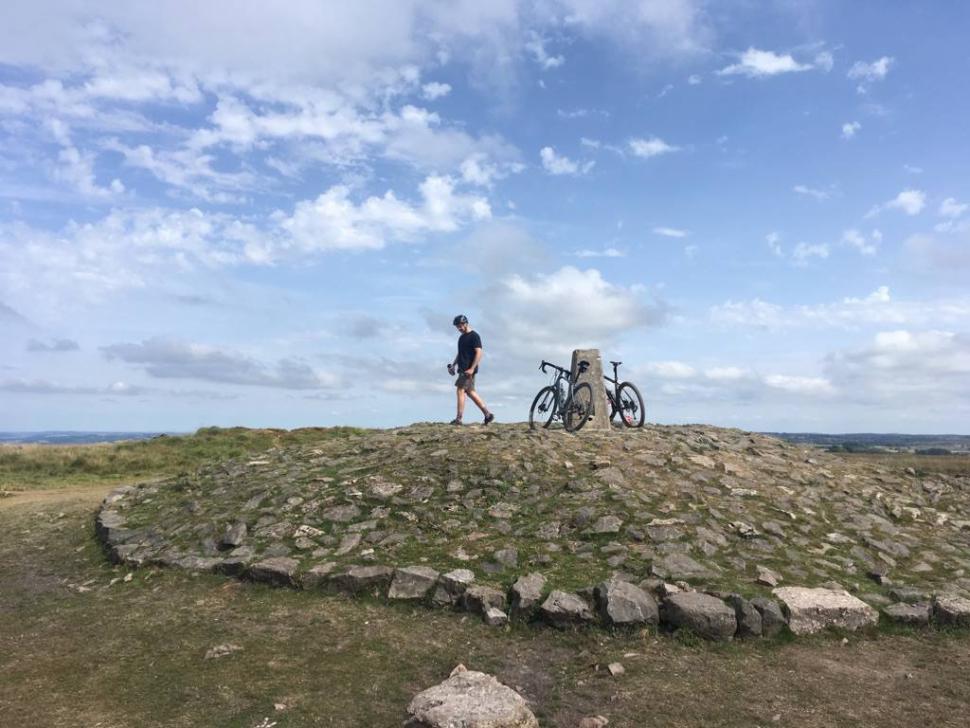 Our shortlist candidate James Craven will be hoping this epic south western jaunt will bag him a brand new Garmin 1030 to plan some more great rides.

Will this North Yorkshire trail loop from Luke Aaron take one of our top spots? 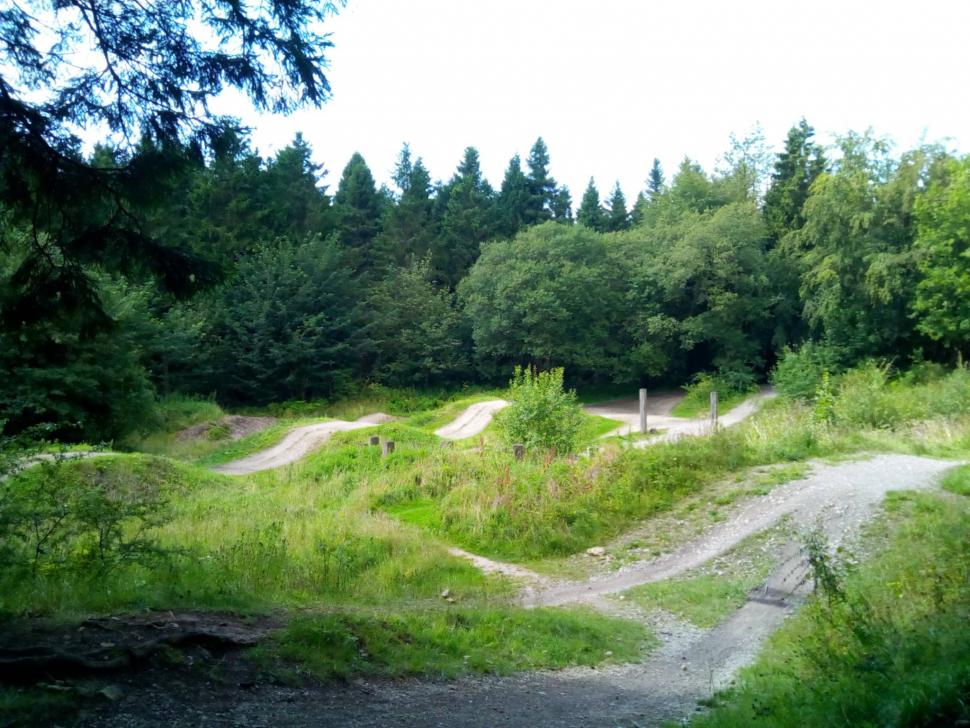 Dalby Forest has plenty of amazing trails, and Aaron has picked out plenty in this undulating and challenging leg-sapper.

road.cc reader and komoot user Chris says: "This is an epic Dartmoor ride, showcasing some of East Dartmoor best trails. Possibly even some of the best trails that Dartmoor has to offer: Steep descents; flowing trails; gnarly climbs; and hike-a-bike may be included. Topped off with some gravel to link it all up. As little road as possible!" "The planned route starts at hound tor car park, however, alternative start/finish points could be the Kestor pub or church CP in Manaton alternatively Ullacombe farm near Yarner Woods. All of which are next to the route."

If you fancy a long day out on the trails, this 60km route from Graham is sure to test the legs and your bike handling skills. Highlights include singletrack that goes through a wild garlic field, some jumps in the woods and a super cool hill ridge for riding along.

So, there are our nine routes! The next step is of course to pick our three winners, and for that we'll be going to our judging panel which includes Stef Amato, founder of Panier.cc. Which one would you like to ride the most? Do let us know the comments, and very best of luck to everyone who made the shortlist.

Employees of Farrelly Atkinson, komoot, their families, and agents were excluded from this competition from the outset. The winners will be selected by a panel of judges including independent members, and notified using the email address associated with their komoot account. Farrelly Atkinson is not responsible for non-receipt of a winner's email. Should a winner not respond within seven days of the sending of the winner's notification, another may be selected at the sole discretion of Farrelly Atkinson. The names of the winners will be posted on road.cc and off.road.cc following the competition. The prize is as described above; no cash alternative will be offered.