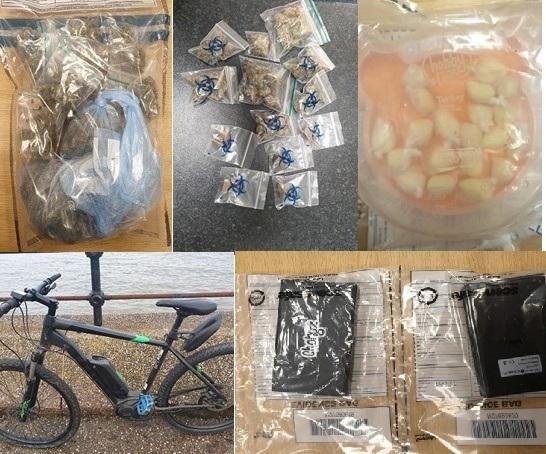 Police in Merseyside say that e-bikes are increasingly being used to further criminality in the area, after officers chased and arrested a man riding a suspected stolen bike, later uncovering large quantities of Class A drugs.

On Tuesday 29 November at around 2.30pm, two plain clothes officers, targeting people suspected to be involved in bike thefts, pursued a man riding an electric bike on Egremont Promenade, Wallasey.

After stopping and searching the man, who had his face covered, officers found cannabis, a set of car keys, and items suspected to be involved in the supply of drugs.

The vehicle the car keys opened was later traced to the Trafalgar Road, where cannabis, scales, and multiple wraps of cocaine were discovered.

A 34-year-old, from Liverpool, was arrested on suspicion of theft relating to the e-bike and of possession with intent to supply drugs. He has since been released under investigation as officers examine the drugs and phone that were seized, as well as carrying out enquiries about the ownership of the apparently stolen bike.

> “Lock it, still lose it”: TikTok account gloats about stealing bikes from school

In a statement, Merseyside Police’s Sergeant Haydn Ward noted the growing tendency for criminals to steal e-bikes and use them to pursue other forms of illegal activity.

“This arrest shows how vigilant and dedicated our officers are when removing any drugs that could endanger residents and spread fear and harm in our communities,” Sergeant Ward said.

“A thorough search for the car found on Trafalgar Road also revealed a large amount of dangerous drugs that were hidden in the vehicle and safely removed from our streets by officers.

“The recovery of the suspected stolen e-bike is also really positive, given how these bikes are sometimes used to further criminality such as drug dealing.

“If you have any information about suspected drug dealing, bike related thefts and robbery or crime in your community please don’t hesitate to contact us. We will continue to have both uniformed and plain clothes officers in the area to target individuals who’re suspected of being involved in criminality and where we can bring them to justice.”