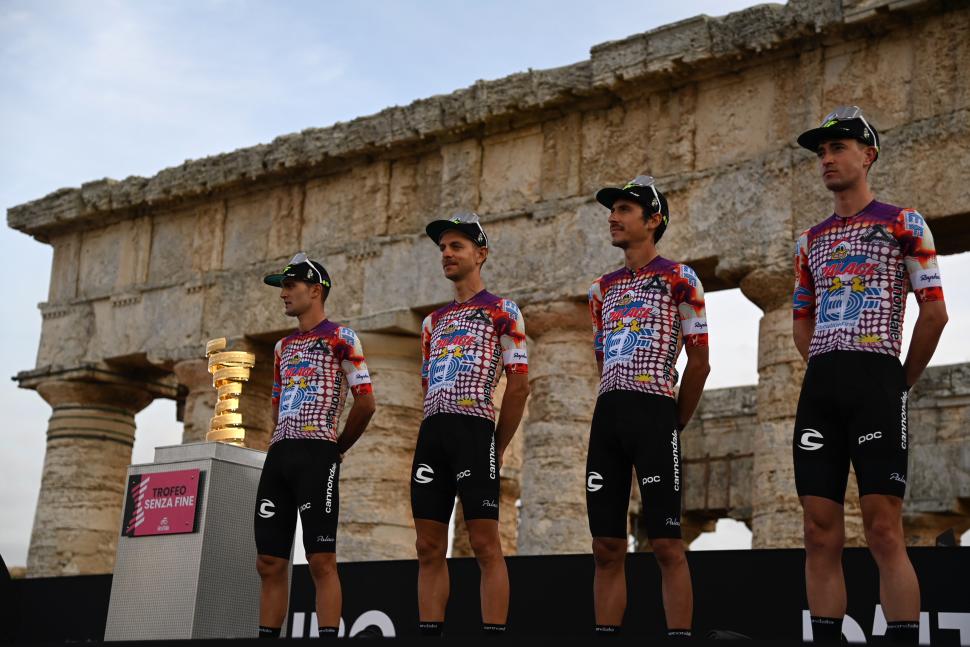 The UCI has fined EF Pro Cycling’s eight riders competing at the Giro d’Italia, as well as the team’s sports director, over its striking one-off Rapha + Palace Skateboards kit unveiled at last Thursday’s team presentation at the Temple of Segesa on Sicily.

Teams are permitted under uCI rules to change their kits once a season, one of the reasons that EF Pro Cycling chose to do so for the Giro d'Italia being to avoid confusion between its usual pink and purple kit and the race leader's maglia rosa.

The result of the collaboration between the cycle clothing and skatewear brands is a striking kit has sharply divided opinion among cycling fans on social media, its impact heightened by the secrecy surrounding the project.

The lack of advance publicity shots of the kit meant that other than those directly involved in the project, even media outlets who had been told that the team would be switching kits for the race, had no idea what it looked like until the riders took to the stage for the presentation.

It appears the UCI was also kept in the dark, with world cycling’s governing body slapping a 500 Swiss Francs fine each on all eight riders as well as sports director Fabrizio Guidi, for sporting “Non-compliant clothing during podium obligations (Team Presentation, 01 October 2020).”

Tweeting a picture of the race jury’s communiqué, team boss Jonathan Vaughters said: “Oh UCI Cycling … you guys are always looking out for the best interest of the sport, aren’t ya? Thanks for the $4000 of fines for wearing our crazy ducks. Hope David Lappartient enjoys his dinner – on us! Salud!”

Oh ⁦@UCI_cycling⁩..... you guys are always looking out for the best interest of the sport, aren’t ya? Thanks for the $4000 of fines for wearing our crazy ducks. Hope ⁦@DLappartient⁩ enjoys his dinner - on us! Salud! pic.twitter.com/YVoTy9egDq

In a subsequent statement, the UCI said: “All jersey must first be submitted to the UCI in their final version for approval … including in the case of a temporary change of jersey for an event, in particular to avoid it resembling another team jersey or a leader’s jersey in the general classification, as well as any prohibited sponsorship.

“The EF Pro Cycling team displayed a different jersey than the one previously submitted to the UCI during the presentation of the teams for the Giro d’Italia 2020. As a result, the team deliberately failed to comply with the regulatory process and was fined CHF 4,500 by the UCI Commissaires’ Panel. The team was then invited to regularise its situation by the UCI, which allowed it to start the race with this jersey.

The collaboration also extends to the team’s Cannondale bikes, as well as the riders’ Poc sunglasses and helmets – with those used on the opening time trial yesterday featuring a duck’s bill on it.