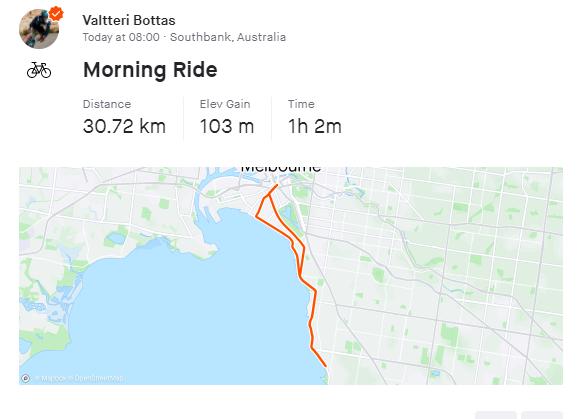 F1 star warms up for Melbourne Grand Prix with 30km/h ride...uploaded to Strava, of course

How did Valtteri Bottas warm up for his 8th-place finish at the Melbourne Grand Prix this morning? With a 30km/h training ride, of course. And, like any true cyclist, the Finnish F1 racer uploaded his spin to Strava... Nice for some, getting paid to roll along the Aussie coast in toasty temperatures of 18-24°C (depending on which of his Garmin Epix Gen2 or Strava you trust more). 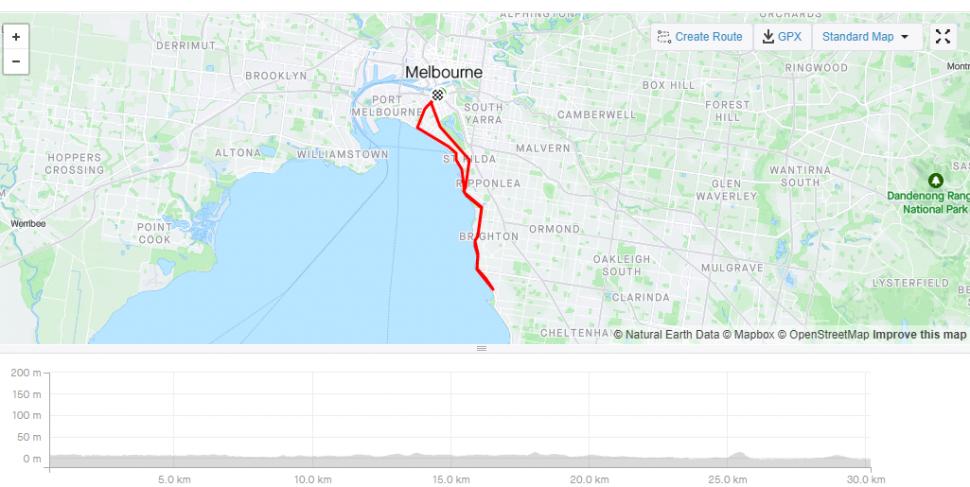 Admittedly, Lewis Hamilton's former Mercedes teammate did then have to go and race a Grand Prix, finishing 8th, so it is not all pedalling along promenades.

With that said, Bottas' 30km/h average speed, on what was presumably a relaxing pre-race warm up, hints at the Finn's fine fitness which saw him finish second in his age category on gravel racing debut at the SBT GRVL event in Colorado last summer.

I guess you would get pretty quick pretty quickly if your partner is Canyon-SRAM pro and two-time women's Giro d'Italia stage winner Tiffany Cromwell.

Last week, Bottas was snapped cheering on Cromwell as she raced the cobbles of the Tour of Flanders, supporting team leader Katarzyna Niewiadoma.

This shot of Valtteri Bottas looking so happy while taking a picture of Tiffany Cromwell at Flanders is so important to me pic.twitter.com/aZLgfbJsUb

So, when you have got a women's WorldTour training partner to keep up with perhaps it should not be a surprise to see the 32-year-old Alfa Romeo driver tapping out relatively easy 30km/h rides.

The joys of urban cycling will explain all those stops and accelerations, but helped Bottas burn 577 calories before the racing had even begun.

The 10-time Grand Prix winner regularly shares his rides on Strava, with one recent activity attracting a comment from a British fan offering Bottas a place on the local club run when he arrives at Silverstone in July. Could Valtteri be coming to a Northamptonshire lane near you? This week, the now-former No.1 mechanic of Formula E outfit Jaguar TCS Racing, Charlie Forkner, landed himself in hot water after a screenshot emerged of a foul-mouthed social media post in which he ranted about cyclists who do not use cycle lanes.

Forkner said cyclists who ride in the road when there is a cycle lane available should be "ran over [...] dragged onto the path and p*ssed on by everyone!". Shortly after, Jaguar TCS Racing released a statement saying the mechanic was "no longer associated" with the team.