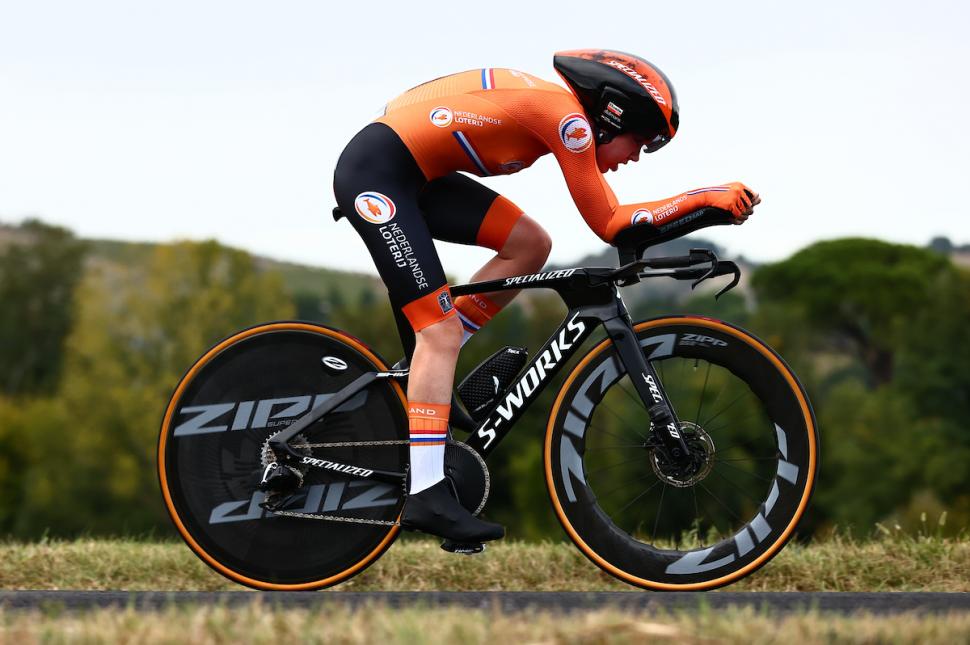 USA's defending champion seemed set to retain her crown in Imola before crashing over barrier...
by Simon_MacMichael

Anna van der Breggen of the Netherlands, four times a silver medallist in the time trial at the UCI Road World Championships, has won the rainbow jersey at Imola today in dramatic circumstances as defending champion Chloe Dygert of the USA crashed over a roadside guardrail as she seemed set to retain her title.

Dygert, the red-hot favourite, dominated today's race just as she had done in Harrogate 12 months ago.

The 23 year old had a lead of almost half a minute on her closest rival at the intermediate time check on the 31.7km course that started and finished at the Imola motor racing circuit in Italy's Emilia Romagna region.

However, coming into a right hand bend on a descent her bike started weaving across the road, possibly as the result of a slippery surface or a front puncture, and after wrestling to keep control she was thrown over the barrier to the left hand side of the road and onto a grass slope on the other side.

She did not remount, and the USA Cycling has since reported that she is "conscious and talking."

Dygert was on track to win her second ITT World Championship, but has abandoned the race after her crash over the guard rail. All we know is that she is conscious and talking. More updates to come.

Van der Breggen, aged 30, won the world championship road race in 2018 and has been runner-up in the time trial in four out of the past five years, including 12 months ago in Yorkshire.

Today, a storming second half of the ride saw her put in a time of 40 minutes 20 seconds to take the rainbow jersey from Switzerland's Marlen Reusser by 15.58 seconds, with a second Dutch rider, Ellen van Dijk, winner of the event in 2013, taking bronze, 31.46 seconds behind her compatriot.