Video footage has appeared online apparently showing the incident which led to Mathieu van der Poel being charged with assault after confronting teenage girls who repeatedly knocked on his door during the night before the World Championships.

Dutch news outlets AD and Wielerflits were sent the videos, which appear to show a girl about to knock on a hotel room door before her, and a second girl filming, are chased into their own room opposite by a topless man.

The grainy eight-second video has since appeared on YouTube and Twitter but does not show much more than is described in the paragraph above. AD says it has been in contact with the 14-year-old girl involved who has shown them two further videos in which a conversation with Van der Poel in the aftermath can be heard.

The Dutch news website opted against posting the videos — a decision road.cc has followed with the main video in light of the age of the persons involved — but reported, in the longer video one of the girls showed them, a conversation can be heard in which Van der Poel insists he "didn't touch anybody" before one of the girls says the police "are on their way".

In response to a girl's voice saying the incident is "on camera", Van der Poel replies "no problem" before telling them "you can't knock on my door for three fucking hours".

AD says a girl told him he "can't come into my room" and alleges the Dutch cyclist "threatened" them.

Yesterday, Van der Poel's Alpecin-Deceuninck team released a short statement saying they will "follow up in [an] appropriate way" and examine the incident before taking "further steps".

We have taken note of the events that took place in Wollongong in the past 48 hours. Needless to mention everyone loses here, and we can only regret that.

Initially, our focus was on providing legal assistance on-site and on helping Mathieu van der Poel to return home quickly. Now that has happened, we want to get a clear picture of the course of events, through inspection of the complete file (we don't have the court documents yet) and a conversation with Mathieu van der Poel and those involved at Team NL. Based on this, we will determine which further steps to take.

We would like to emphasise that respect for others, inside and outside the peloton, is and always has been a core value of Alpecin-Deceuninck. That is why we want to follow up on this in an appropriate way. Only then will team Alpecin-Deceuninck and Mathieu van der Poel communicate about this again.

The statement followed the announcement that Van der Poel had been fined A$1,500 (£909) after admitting two counts of common assault. According to New South Wales Police, who were called by hotel management, he pushed both of them, with one of the girls falling to the ground and the other sustaining a grazed elbow after scraping it against a wall.

The Dutch star was arrested and taken to a police station where he was charged, and returned to the hotel at 4am.

Having been unable to sleep he abandoned after 35km of the elite men's race, later won by Remco Evenepoel. 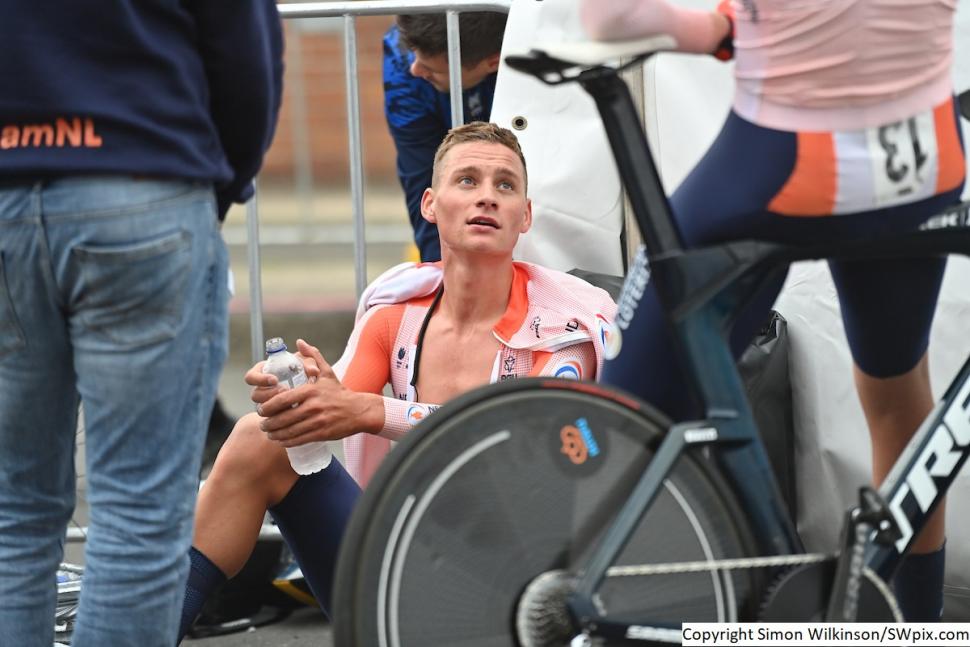 Van der Poel had been due to appear in Sutherland Local Court today, but the hearing was brought forward due to the timing of his return flight to Belgium.

After admitting both counts, Van der Poel was fined a total of A$1,500 by Magistrate Hugh Donnelly, who told him that he was wrong to have taken the law into his own hands and should have called hotel security instead.

His lawyer revealed that in the courtroom, Van der Poel's partner "was in tears and he was very disappointed himself."

"He has a great reputation, so does his family. He said it felt like he disappointed his country and his team," the lawyer said.

The rider is now on his way back home, and as a result of his conviction will be unable to re-enter Australia for three years.