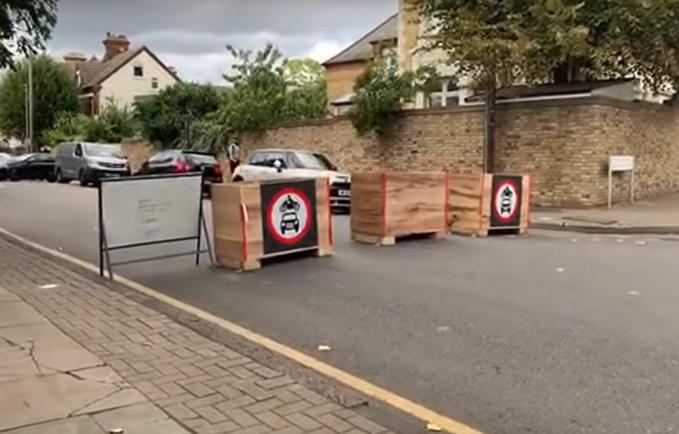 Wandsworth Conservatives launch petition against A24 improvements
by Alex Bowden

Wandsworth Council has ‘suspended’ its Low Traffic Neighbourhood (LTN) scheme with the planters blocking roads to motor vehicles due to be removed from today. The Conservative-led council cited ‘emergency access’ and ‘traffic flow’ by way of explanation, claiming that improvements being made to the nearby A24 as part of Mayor Sadiq Khan’s Streetspace for London programme have compounded these issues.

A number of local authorities are currently using emergency active travel funding from the government to roll out LTNs, which block rat-running drivers, reducing pollution and making roads safer for cyclists and pedestrians.

Many have however been met with resistance by a vocal minority and some have even been vandalised.

The schemes – which are the council’s own – have not proven universally popular.

This has just been sent to me of drivers on Beechcroft rd.

Hope there will be some suitable adjustments to stop them doing this. #DriverEntitlement

Explaining the measures last month, transport spokesman John Locker said: “We believe the changes we are piloting could lead to a dramatic improvement in the quality of life of residents in these three pilot areas.

“Much of the traffic using these streets is simply passing through or trying to avoid hold-ups on the A24. By deterring these rat runners and making these areas quieter and safer we hope to inspire people to take up other forms of travel like walking and cycling.

“But nothing is set in stone. These are temporary pilot schemes only so it’s important that we monitor the effects carefully and listen closely to what local people tell us about their pros and cons. Their feedback will be crucial in determining what happens next.”

A council statement yesterday announced that, “an initial review of the trials has identified concerns with emergency access and traffic flows. And this has been compounded by additional changes that Transport for London (TfL) is making to red route roads in the borough.

“These include significant interventions on the A24 (Balham High Road to Tooting High Street and beyond) including moving bus stops, installing cycle lane segregation, banning turns at a number of junctions and removing parking.

“The scale of these A24 changes coinciding with the council’s efforts to establish LTNs on residential streets has caused confusion and long traffic queues.

“Additionally, concerns around rising COVID rates and reduced capacity on public transport has meant that alternative travel options are limited for many people at this time.

“In light of these initial trial findings the council has decided to suspend the LTN trials.”

At a national level, the government has pledged to help local authorities build “thousands of miles of new protected bike lanes,” financed by £2bn of active travel spending announced by Chancellor of the Exchequer Rishi Sunak back in February and subsequently reconfirmed in May by Transport Secretary Grant Shapps.

However, a statement on the Wandsworth Conservatives’ website makes it clear there is often minimal appetite for such measures at a local level.

The opposition to the A24 Streetspace for London work is also more explicit with a spokesperson claiming that ‘disruptive’ changes are “causing gridlock in Tooting and delaying emergency vehicles.”

The party has even launched a petition asking for the improvements to be reversed.

“Sadiq Khan's disruptive A24 changes are causing misery for residents creating gridlock, delaying emergency vehicles and causing unnecessary pollution,” it reads. “It's only a matter of time before disaster strikes.”

Earlier this month, more than 100 organisations signed an open letter in support of LTNs.

Alice Ridley, from the Campaign for Better Transport, commented: “Councils should not allow a vocal minority to stop them from improving local transport and protecting their residents.

“The misery of air pollution and rat-running on residential streets needs to become a thing of the past.”