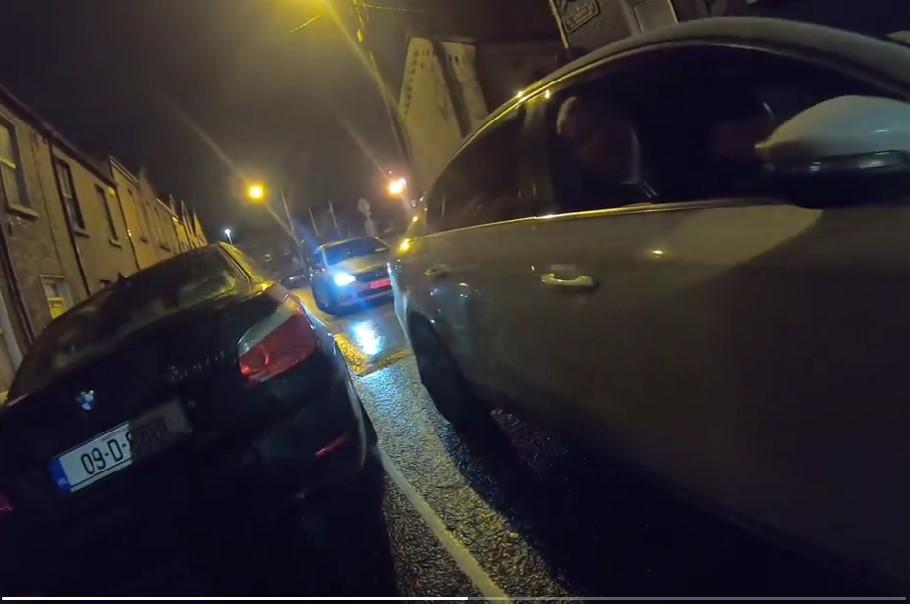 The driver added: “If I was coming down speeding after a few pints you're dead and your bike is squashed”...
by Simon_MacMichael

A cyclist who asked a driver in Limerick whether he was drunk was startled to receive the reply “yes” from the motorist.

Aidan Hogan posted bike cam footage of the bizarre incident to Twitter, which happened as he was cycling down St Joseph’s Street.

With a driver coming towards him, Mr Hogan was forced to pull into a gap between two parked cars to let the vehicle through.

The driver said to him: “What are you doing on the road there?” to which Mr Hogan replied, “On the road?”

In response, the driver said: “If I was coming down speeding after a few pints you're dead and your bike is squashed.”

The cyclist then asked the driver if he was drunk, and apparently surprised by the immediate affirmative response, asked the same question again, the driver once more replying, “yes.”

Mr Hogan then said to the driver that he would take his registration number, to which the response was, “Yes, do you want the reg?”

“Yeah, I do, yeah,” he replied, the driver telling him to go ahead and take it before driving off.

Posting the video to Twitter, Mr Hogan observed that it was “so nice to meet new people on the street.”

So nice to meet new people on the street.

Looks like they don’t have time to pull in to the left for a few seconds to leave a 🚲 through, but turns out they actually have plenty of time for a little stop-n-chat and to threaten some violence ❤️ pic.twitter.com/JQvRXEhg8a

He continued: “Looks like they don’t have time to pull in to the left for a few seconds to leave a bicycle through, but turns out they actually have plenty of time for a little stop-n-chat and to threaten some violence.”

While some Twitter users urged him to report the incident to the Gardai, Mr Hogan said he wasn’t sure the issue would be taken seriously.

Not sure I could be bothered. Wouldn’t be too sure if they would take it seriously

Another person commenting on the video suggested it would be easier if the cyclist simply got out of the way, but was told that the cyclist had “every right” to be on the road.

Who would it be handier for?

Every other thing on the road is bigger than a bike!
If a cyclist were to get out of the way of every 3piece suite with wheels every time he would never get home.
The 🚲 was there first and had every right to proceed like he did.
The driver was an arrogant bully.