Books about the 2014 Tour de France keep coming. Book de Tour by Greig Leach and Sheree Whatley will surely be 'best of class', although it may only be a class of one: I am not aware of any other book chronicling every stage of the race through the use of paintings. 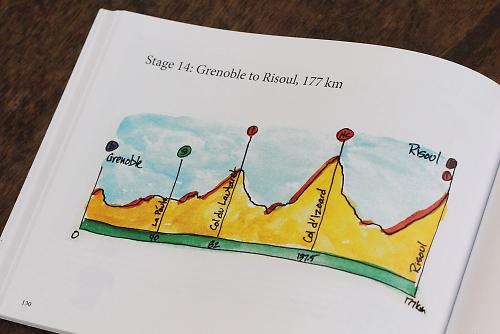 Book de Tour is described by the artist, Greig Leach, as "a collection of my small watercolor and ink paintings from the 2014 Tour de France completed as the race unfolds on my television screen and showing what I believe to be the key moments of each stage."

Leach has already done something similar, having produced paintings for several races in recent years (see http://www.greigleach.com/ for example), but this is the first time that he has put them all together in a book. 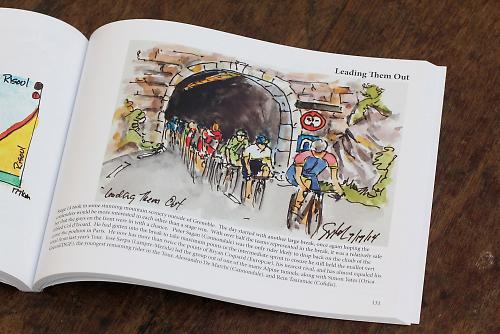 Many of the pictures in the book were originally posted on Leach's blog and one (titled 'Saying Farewell') was even used by Alberto Contador in a tweet following his departure from the race.

The book was funded by a Kickstarter campaign that ran during the race itself, and much to the surprise of a sceptical publisher the full funding was achieved. That support helped confirm to all parties that there was a market for such a book.

The book has a chapter on every stage of the race, and each chapter has up to 10 watercolours with a few lines of explanation and comment written by Leach; that gives us 24 pictures of the action on British soil. I was interested to know more about why this style of painting was chosen and the process used, so let the artist explain: "I feel the watercolors capture the speed, movement, and vivid color of the peloton. Plus they are a quick media that don't allow for getting overly precious with the work." I spent some time exploring this whole new world to me, and if you want to know a bit more about the tools used look at www.richesonart.com. The artist is American, and all of the paintings were done while he was sitting in front of a TV screen in America watching the race. This has several implications – apart from 'incorrect' spelling and (in my equally biased view) a slight over-exposure of American riders.

One challenge for Leach is that he can only choose from the race coverage on offer, and at the time of choosing he will not yet know the significance of the event. "As I watch I pause the video when I see something that captures my eye. I select what I think will be an important move, something that is visually interesting, or an image that conveys the importance of the race or stage".

Another limitation of having to rely on TV coverage was that Leach had to work with the lacklustre coverage of La Course, the very welcome women's race that ran shortly before the final stage of the men's event. It is still good to see it featured here. 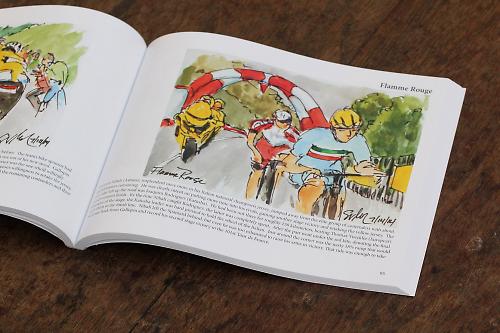 The end result is a book about le Tour like no other, and clearly required a lot of work and skill. The paintings necessarily lack great detail, but do what is required of them: "to tell the story of the race with bold strokes and washes of color".

At the time of writing the book does not seem to be available from many outlets in the UK, but Gazelle Books appears to offer a suitable service.