The Kinesis Racelight 4S Disc is the disc-ready evolution of Kinesis' winter platform. 4S stands for Four Seasons and this is certainly a frameset that's capable enough for building up and riding at any point during the year. 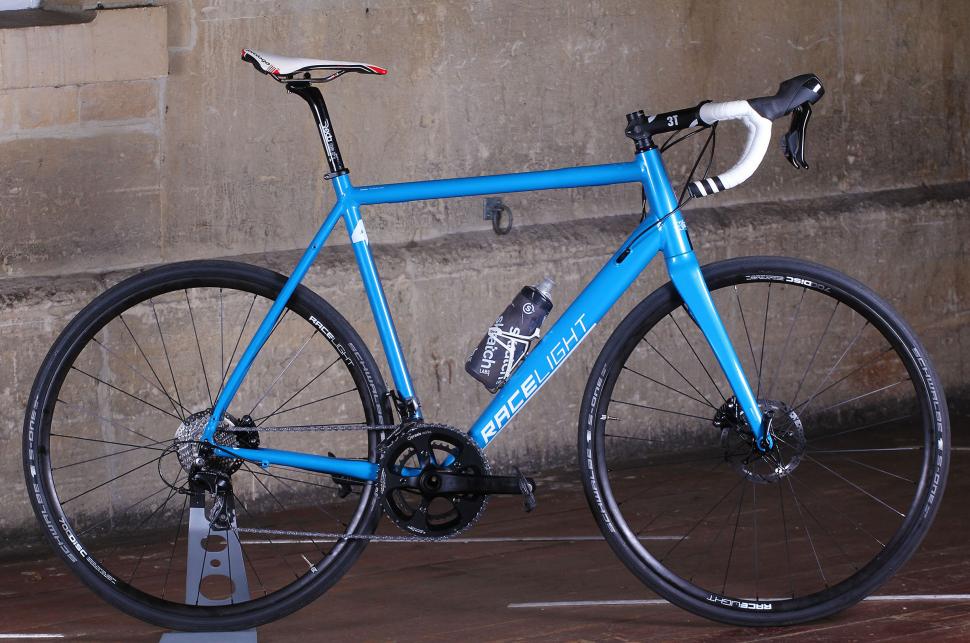 Kinesis are mostly known for making aluminium bikes (although they're increasingly getting plaudits for their titanium ones) and the 4S Disc is crafted from the company's proprietary Kinesium tubeset. They haven't skimped on the metal: the massive downtube is as big as it can be while still allowing a 68mm threaded bottom bracket, which is a much more easily serviceable option for a bike that's going to see some foul conditions. The rest of the tubing is equally chunky, although the 4S disc uses a narrower 27.2mm seat tube than the more race-oriented Aithein to add a bit of comfort from seatpost flex. 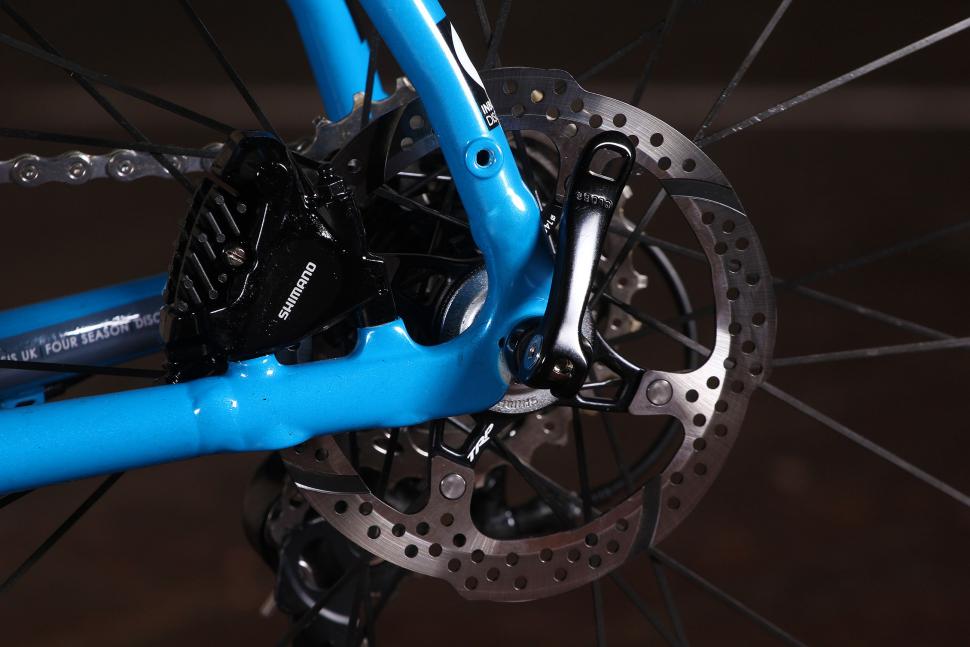 Although it's called the 4S Disc you don't have to fit discs to it. This Kinesis is one of only a handful of bikes that can be built up either with rim or disc brakes. Culprit make a couple, and The Light Blue Robinson gravel bike also has that capability (look out for a review of that one soon) but there's not masses more. So if you're buying the 4S Disc as a winter frameset and you happen to have a rim-brake groupset knocking around you can use that, and switch to discs at a later point if you want. Non-disc road bike wheels tend to be an axle length of 130mm and disc wheels 135mm, so the 4S Disc has adjustable dropouts to cope with both standards. While we're talking about standards, the disc mounts on both the alloy frame and the full carbon fork are Shimano's new flat mount. That's good because they'll work with the next generation of disc brakes including the new BR-505 Shimano 105 units we used for this build. It's also good because if you're running callipers, the mounts are next to invisible. 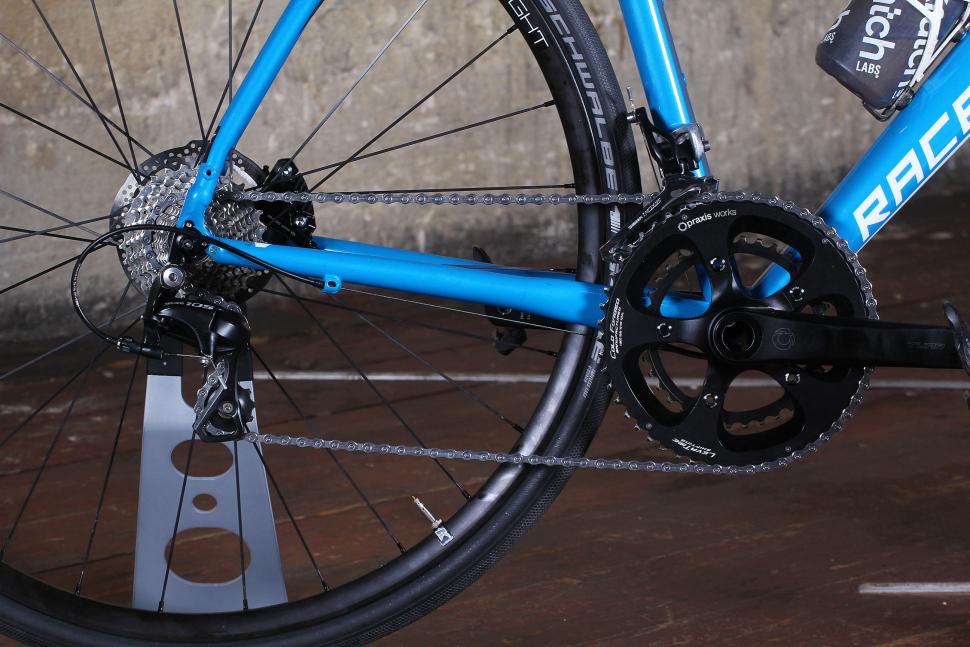 We built the frameset up as a do-it-all winter bike, with 105 hydraulics and Kinesis' own Racelight disc wheels, shod with Schwalbe's fantastic S-One 30mm tubeless tyres. I fitted some mudguards after the riding shots shown here too, which were a bit of a squeeze but we managed to make it work without too much faffing. Kinesis claim you can run a 32mm with full 'guards. I didn't try that but I reckon it'd be pretty tight.

> Everything you need to know about disc brakes

With our full build weighing in at 8.95kg the bike wasn't super light but the weight never really felt like an issue and the 4S disc responded for the most part in a lively way. It's a fun bike to throw around, and although the 1025mm wheelbase and 606mm stack height of the 60cm frameset suggest a more stable and leisurely ride that's not the nature of this bike at all. There's nothing it likes better than kicking off in response to a big jump on the pedals, and the big downtube and beefy stays make for excellent power transfer with no hint of flex. At the front the well-built fork is precise and stable at speed. I could eke some rotor rub out of the front disc when sprinting, suggesting there's a bit of flex in the system, but it never felt like an issue and it's a bike that's happy to pin it round the corners without ever feeling vague. 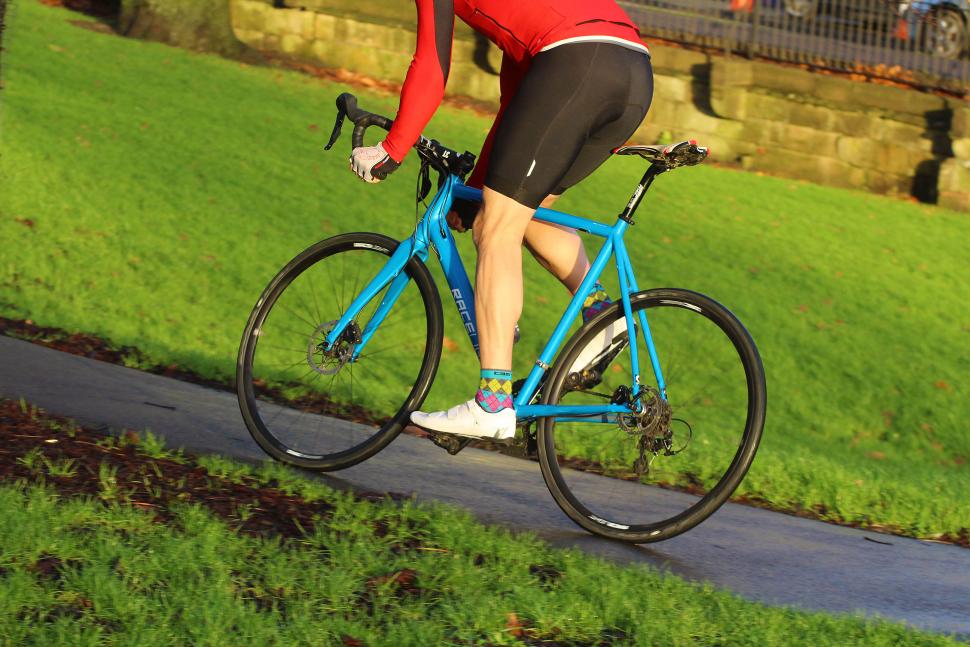 I took the 4S Disc on long training rides, commuted to work on it, did sprint intervals on it and even rode it round muddy reservoir trails in the dark, and it was happy enough doing any of that. Okay the S-One tyres aren't exactly mud-pluggers, but the slippery surface did give a good indication of how the bike behaved at the limit of its grip, and the slide outs were predictable and, for most part, saveable. 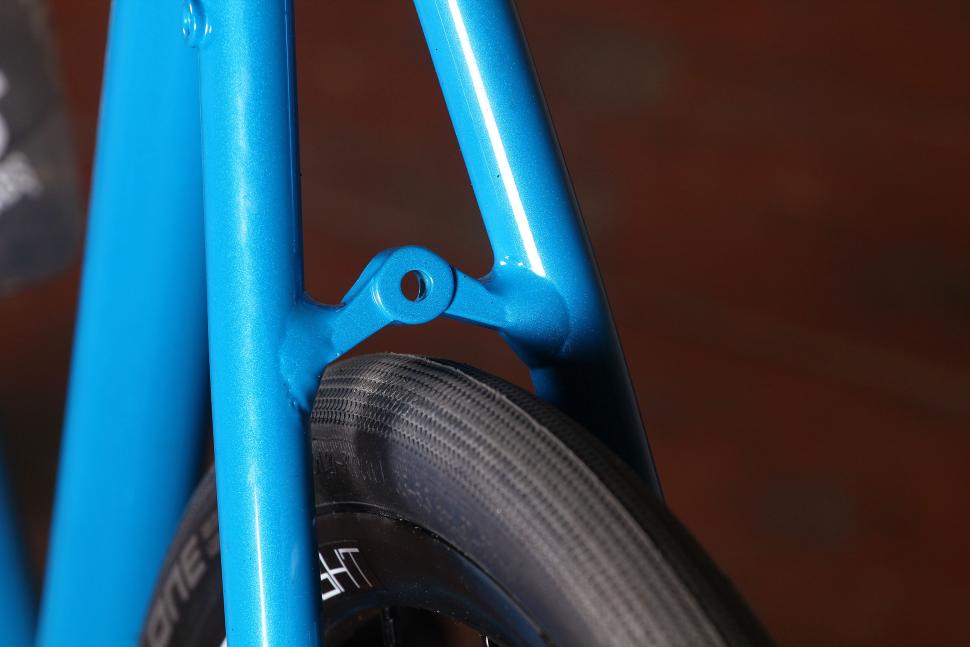 It's a firm ride, but not an especially uncomfortable one. That's helped in this case by the tyres, which I tend to run at about 60psi; that would probably turn any bike into a cosy armchair. But even with the Schwalbes pumped up to 90psi, the bike didn't feel harsh. There's more give from the narrow seatpost and the tyres than you're getting from the fairly beefy seatstays, but as a system you wouldn't say the 4S Disc was an uncomfortable bike and I was happy on 4-5 hour rides with no discomfort.

> Road tubeless: everything you need to know

Versatility is the name of the game

The 4S Disc can take discs or rim brakes, as I've previously said. The routing is internal, or semi-internal to be more exact. The cables (and hoses) route through the downtube and exit through two fairly sizeable holes below the bottom bracket, with the rear gear cable running externally along the chainstay to the mech. It's a simple enough system and works well, and Kinesis provide port covers for hoses and cables, as well as blanking plates to cover the holes you're not using. Cabling is pretty simple, with the two exit holes big enough that often you can just poke the cable down the down tube and it'll pop out. If it doesn't you can easily push a spare cable up and hook it through a port with a spoke, then attach the new cable and pull it back through. As internally-routed bikes go it's definitely at the easier end. 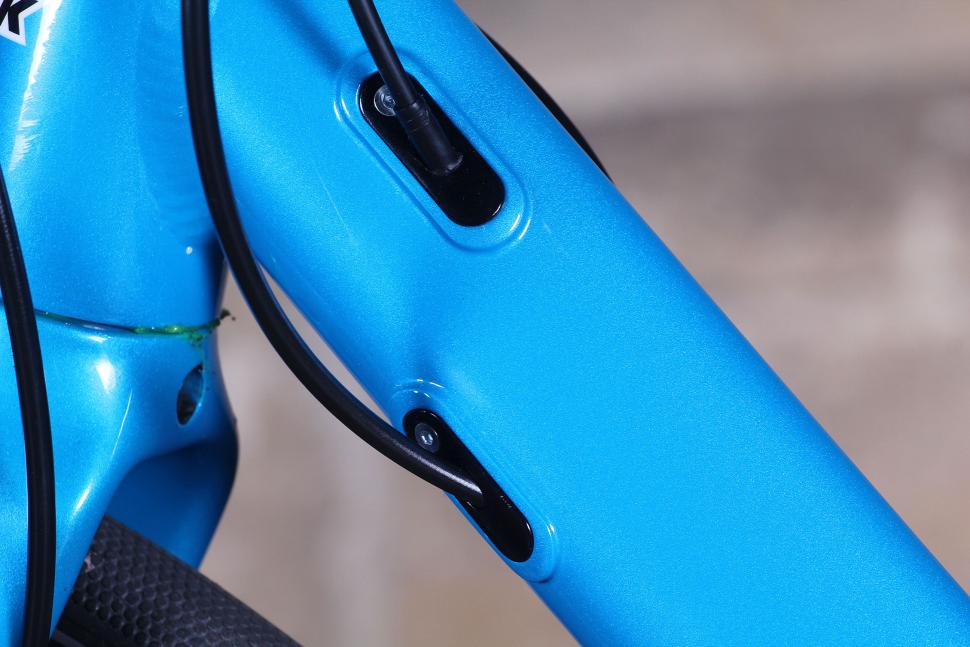 As well as that, the 4S Disc will take full mudguards and a rack, with eyelets for both (although there's only one mounting point at the rear dropout, so you'll have to double up there). There was a bit of paint in some of the holes on our frame but it wasn't a major issue, and the addition of proper mounting points for a rack opens the frameset up to commuting and audax riding, or fast touring. It's a bit on the aggressive side for a longer tour, unless you're off on the Transcontinental or something. Come to think of it, it'd probably be ideal for the Transcontinental...

At its heart though the 4S Disc is a pretty traditional winter trainer updated to take advantage of the new disc brake systems that are on offer, and which are a sound choice for a winter bike. It feels more like a race bike than the numbers would suggest, and in spite of its long wheelbase and reasonably upright position (stack to reach ratio of 1.51, compared to the Aithein's 1.44) it's nimble and fun to ride. At £649.99 it's certainly not a steal, and you could probably build up a 105 winter bike from stock frame and parts for about that if you shopped around. But if you're looking for a versatile frame that'll take a range of builds, and is also an engaging ride, this is one to look at.

Tell us what the frameset is for, and who it's aimed at. What do the manufacturers say about it? How does that compare to your own feelings about the bike?

Nicely made and finished. some minor issues with paint in threads but nothing major. Welds are tidy, if chunky

It was a very good fit, less aggressive than the Aithein race bike but not too upright

Yes, the bike as a whole was very comfortable. A lot of that is down to the 30mm tyres, the frame itself is fairly firm

It's plenty stiff and precise

Not a problem, although with mudguards you need to be a bit more careful

How would you describe the steering? Was it lively, neutral or unresponsive? Neutral

How did the build components work with the frame? Was there anything you would have changed?

The 105 hydraulic build is more or less perfect for a frame like this, although I'd have fitted mudguards from the off. the option to build with rim brakes is good if that's what you have

It's a very capable winter frame. £649.99 is a decent price rather than stellar value, but it's worth the money 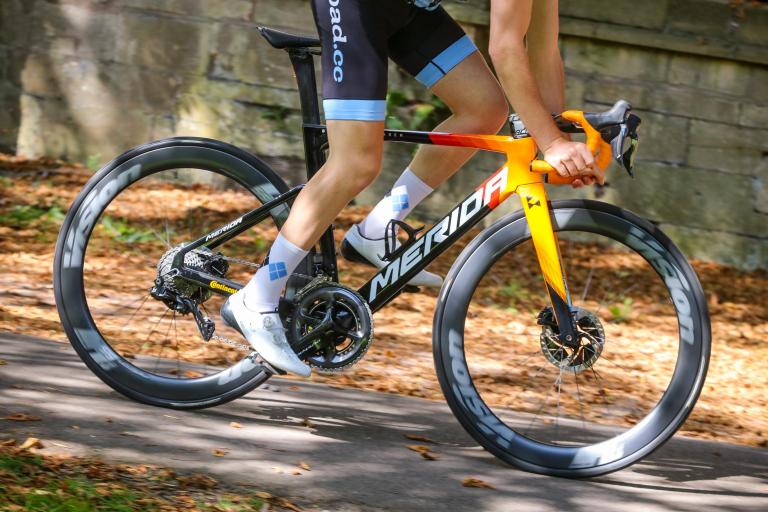 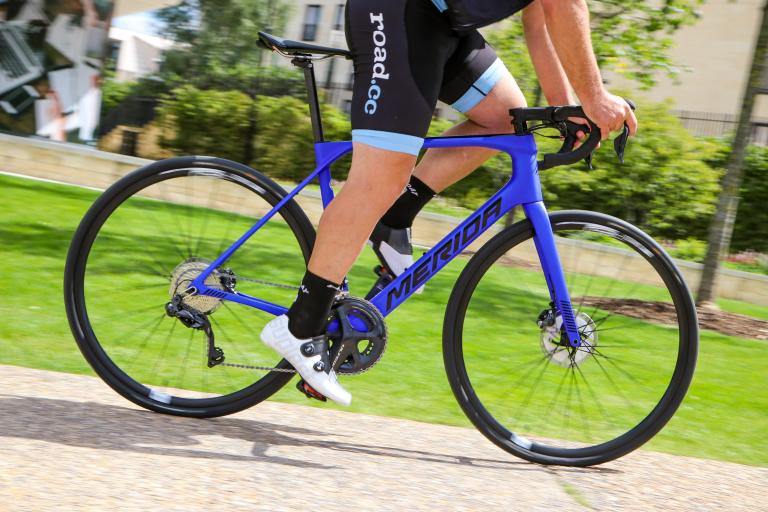 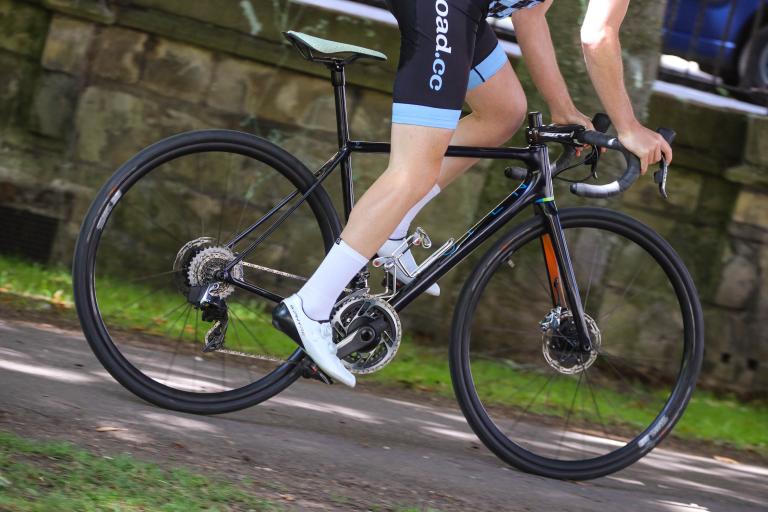 Brilliant frameset for fast climbing, and it's comfortable too