7
10
Decent light with sensible settings that cater for most riding conditions
Weight:
45g
Contact:
shop.upgradebikes.co.uk
How we test

The Lezyne KTV Drive Pro rear LED is a surprisingly capable and versatile unit, with five settings that cater for most contexts. Output is generally better than the numbers alone suggest, but I'd say there are better choices for regular, extended riding along pitch black lanes.

In terms of build quality, while some might see the composite matrix construction a step down from last year's CNC machined sibling, I'll take five modes and a total output of 75 lumens, not to mention greatly improved lens area, every time. The heavy duty composite housing is both water and shock resistant, surviving a one-metre drop onto a hard surface.

Behind the 180-degree polycarbonate lens sits a more traditional arrangement of diodes, battery and switch gear. The lithium battery charges via a plug-in 'lolly-stick' arrangement, protected from the elements by a snug fitting port cover. Aesthetically very neat, this also removes the forgotten charging cable drama as you can plug it straight into laptop/PC ports. Give it the full three hours before first use and the charge indictor will flick from flashing red to green as a visual cue.

The switch is a small but user-friendly top-mounted pimple requiring a two-second press before coming to life. Unwanted engagements are unlikely, and it's intuitive enough to locate at night, wearing middle-weight full-finger gloves.

A memory function defaults to your last choice, but otherwise single, successive prods will select alternatives.

The contoured back is designed to accommodate standard and aero seatposts and secures with a sturdy rubberised ladder strap. Spares are readily available and others have been persuaded to fit with minimal effort, which is good news if you're prone to losing them. 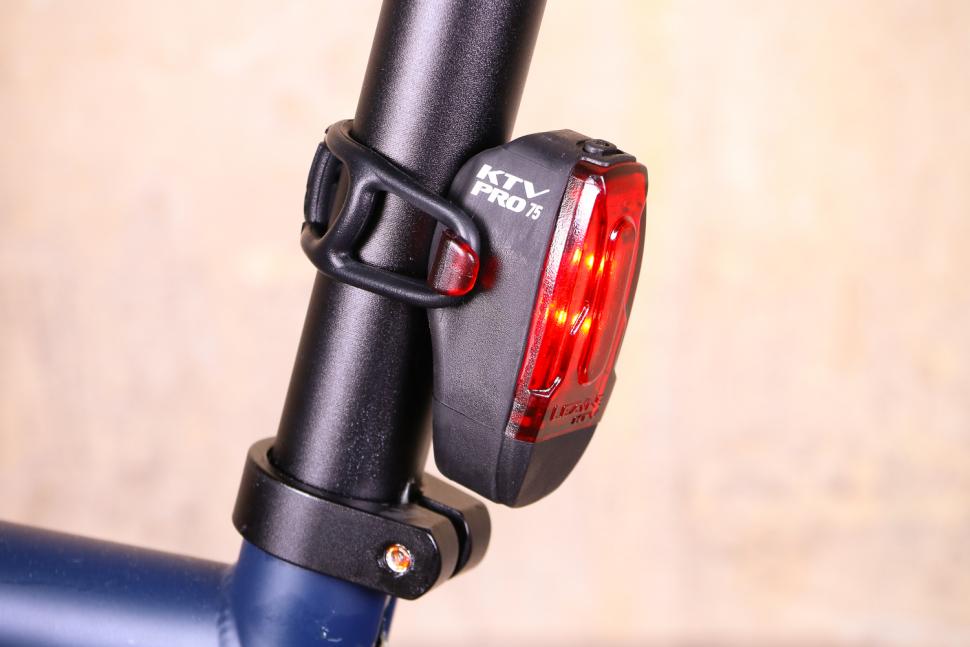 Tenure is really secure on all diameters of post. Bind it tightly enough and seatstay mounting is also realistic, although the grooved back can cultivate a very grimy beard, especially if you're running a bike without full-length mudguards.

The five modes you get here comprise two steady and three flashing. Blast is a moderate, steady 20 lumens, while economy falls to 3. Prodding again engages Daytime Flash (75 lumens), then Flash 1 (25 lumens), and finally we have Flash 2, which is 10.

Starting with the daylight mode, it lacks the outright, retina roasting prowess of some, yet still packs a decent punch. It doesn't match something like Moon's Nebula or Gemini, but approaching riders reckoned they could pick it out from 125 metres on bright to overcast days.

Foggy sections were trickier to put a number on, but I still felt reasonably conspicuous.

Seven hours is the cited run-time – ours returned 6:54, which is close.

Flash 1 has been my default. At 25 lumens it isn't too intense for slow moving traffic in town centres, but is still strong enough for semi-rural/rural work. The general consensus suggests visibility from 180-200m along unlit lanes and relatively clear nights, closer to 100-120m in suburban/urban contexts given the competing illuminations.

Lezyne cites 6:15 for this setting, and I've come within 3 minutes of that. While the 3-hour charge time isn't rapid, it's still practical for recharging at work or when dropping by a friend's for the evening.

When the battery life indicator has been signalling green and red, I've tended to flick down to Flash 2, whose 10 lumens might not sound like much, but in common with Cateye's Rapid it's still good enough for town, or when you need to conserve juice on a longer ride. From full, run-time has been 13:25 on successive occasions, just 5 minutes less than claimed.

Usually I'm citing really big numbers as being of limited use, but here I've found little call for the 3-lumen economy setting, other than limping home in an emergency. Then again, it's on par with if not superior to some bargain basement dynamos. Its 12:54 run-time, hero to zero, could be a winner for some, especially when trying to squeeze out dwindling reserves.

The KTV Drive Pro is a pretty good light for the money. The daylight mode will entice riders looking to remain more conspicuous during the day, and output in the night flashing modes is certainly good enough for general riding. For deserted back roads, 30 lumens plus is my benchmark, so I'd look for something with more bite if this is your staple riding territory.

Decent light with sensible settings that cater for most riding conditions

I'd say it's a nicely executed, user-friendly rear light that covers most contexts pretty well.

Pretty sturdy composites and has fared well, when accidentally dropped.

Simple to operate, even in gloved hands. Memory function removes faff if you have a favourite/default mode.

What I'd expect from this price point and design brief.

Competent in most situations, save for long stretches of pitch black, open road.

Overall it's a decent all-rounder for the money. Modes cater for most riding contexts, although I have some reservations about the 3-lumen setting. The others command attention without being overly aggressive, and the peripheral bleed seems better than the side windows might suggest.

I'm not entirely sold on the 3-lumen setting.

Would you consider buying the light? Yes, for town through to semi-rural riding.

Would you recommend the light to a friend? Generally speaking and in the above context, worth a look.

It's a nicely engineered and well-thought-out unit for general riding.