Back to REVIEWS
review
Gravel and adventure bikes
Frames

8
10
A quick, comfortable and customisable flat-bar option for everything from city streets to gravel tracks
Weight:
9,740g
Contact:
www.snowdonbike.co.uk

The Snowdon Paradox 38 is a blast on everything from city streets to gravel trails, offering great control, a high level of comfort and an impressive turn of speed.

Although it has a lot in common with an old-school rigid mountain bike, the titanium Paradox 38 is billed as a flat-bar gravel bike and it performs beautifully when you head off smooth asphalt and on to loose and uneven surfaces. I have quite a lot of gravel roads around my way, but if you don't it's equally at home on towpaths, forest roads, some bridleways and trails, that kind of thing.

The one caveat I'll make right away is that the Paradox 38 comes as a frame only and the ride will obviously be affected by the spec you choose. I'll try to take that into account, but my thoughts will be influenced by the build as seen. With that in mind, let's get cracking. 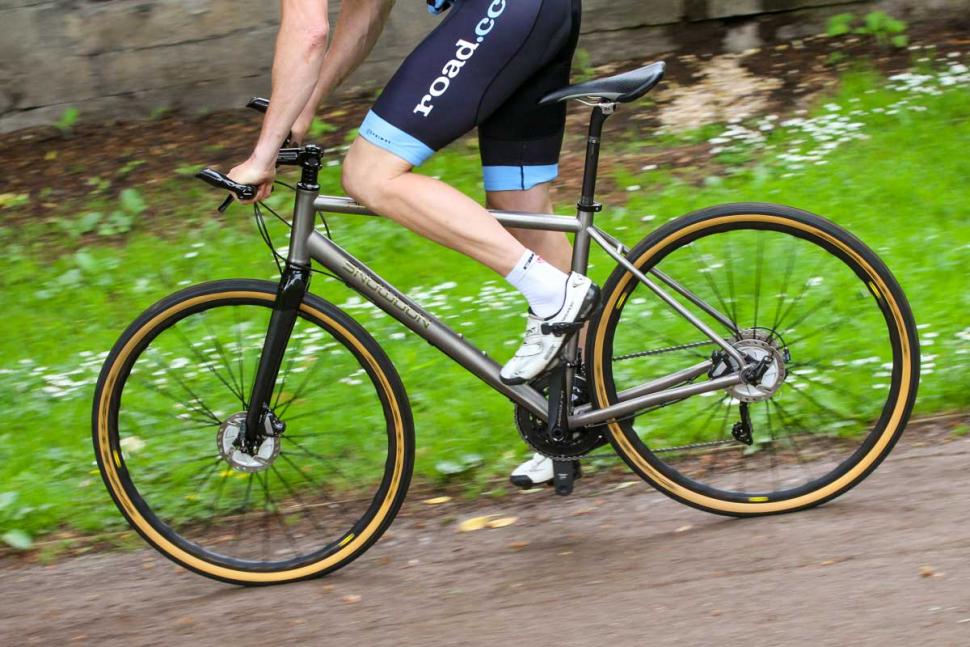 A central part of the Paradox 38's character is its flat handlebar and a geometry that's designed with that in mind. This isn't just a standard gravel frame with a flat bar slapped on the front – that really wouldn't work all that well. Even long-time drop bar users are likely to find control in technical situations a little better with a flat bar. The extra width helps keep things steady, manoeuvrability is a touch simpler and the brakes and gears are just a smidge easier to operate, particularly when you're riding out of the saddle – at least, that's what I've found with the Paradox. 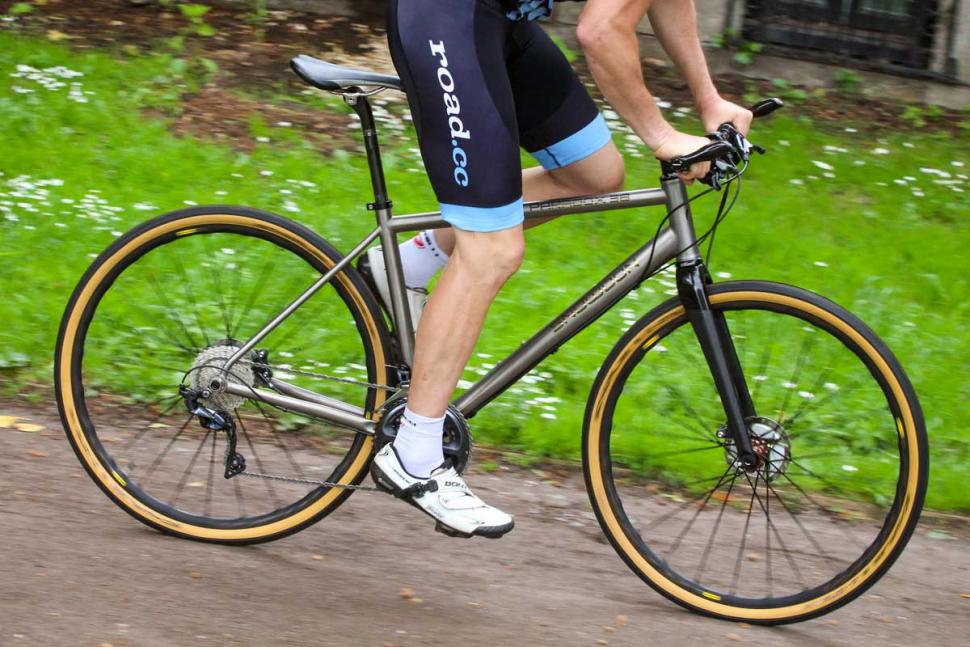 On the flip side, you can't hunker down as low over a flat bar when you want to get aero for the flat and fast stuff – not as comfortably, at least. Swings and roundabouts, innit. I'm not saying a flat bar is right for everyone, but I would say that it's worth considering for a bike of this kind. Depending on the exact riding you do, it could make a lot of sense. 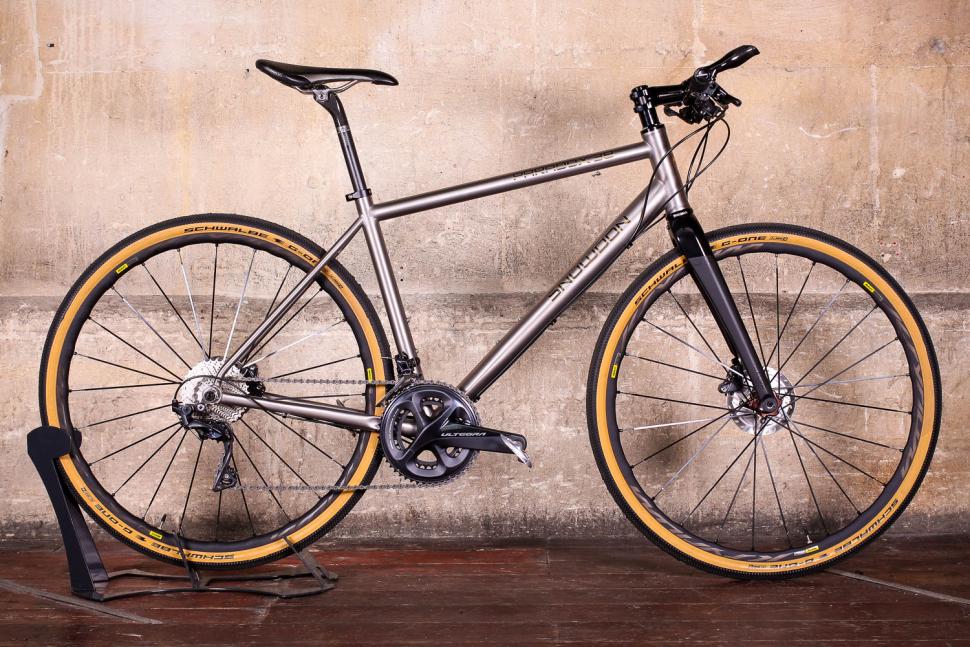 Head onto pox-marked gravel roads and the Paradox easily maintains its line so you don't find yourself constantly battling to keep it straight. You also get lots of comfort here. First and foremost, that comes from the tyres. The Paradox 38 officially has clearance for 38mm if you go for 700c wheels, and 50mm if you opt for 650b. Our review bike came fitted with Mavic Ksyrium Elite Disc Allroad wheels with Schwalbe's G1 Allround tyres, 40-622, and there was plenty of space around them (the tyres did measure 40mm on these wheels, according to the trusty road.cc vernier callipers). The Paradox 38 has been more than capable of withstanding all the abuse that I've chucked its way. Although not mega-light compared to some of the carbon bikes that pass through the road.cc testing towers – our large sized built-up bike weighing in at 9.74kg (21.5lb) – it's stiff and responsive when you crank up the power. 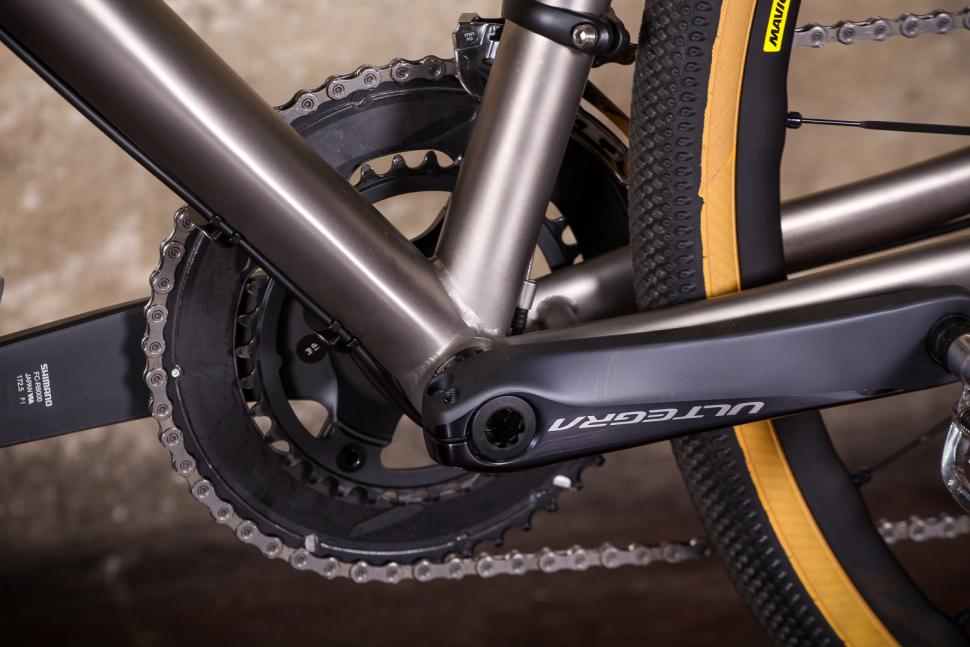 When Mike Stead reviewed Snowdon's flat barred/rim brake road bike for road.cc last year he described it as one of the snappiest bikes off the line that he had ever ridden. The Paradox 38 is similar in that it jumps into life when you ask for some speed. If you associate a flat bar with a sedate performance, think again. This is a bike that'll handle all the power you can muster and it's burly enough to cope with a battering over any knackered old tracks you fancy exploring. 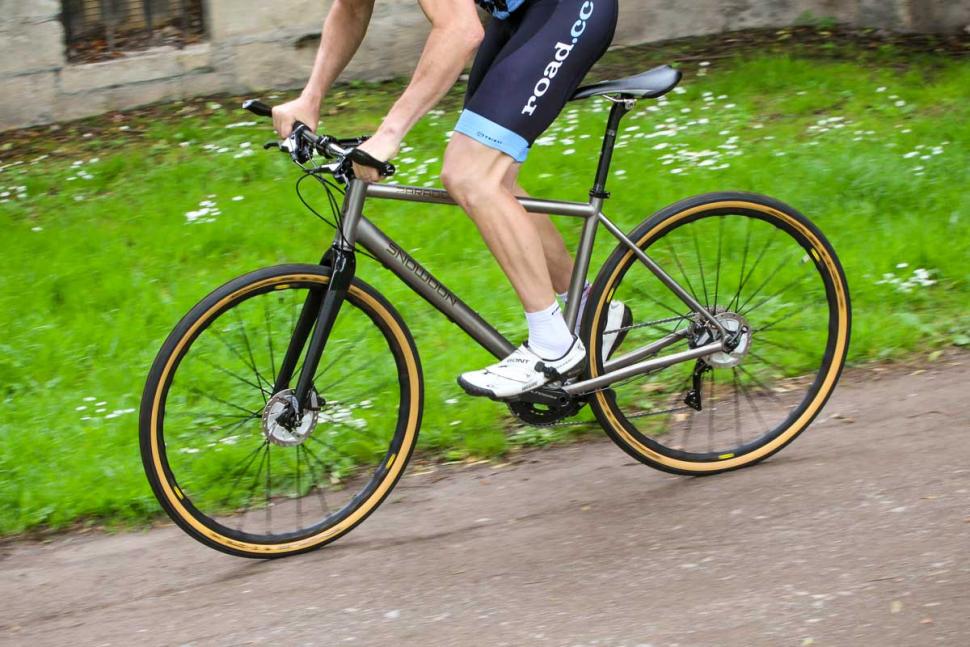 The frame is made for Snowdon in the UK by titanium and steel specialist Enigma Bicycle Works. It is 3AL-2.5V seamless double butted titanium, which is the most common flavour of Ti used in the bike industry, and it's immaculately welded. The workmanship is top quality throughout, as you'd expect of anything coming out of Enigma's Sussex workshop. Although the Paradox 38 is clearly closely related to the Snowdon that Mike Stead reviewed, the tubeset is chunkier, as befits a bike that's designed to be a tough all-rounder. 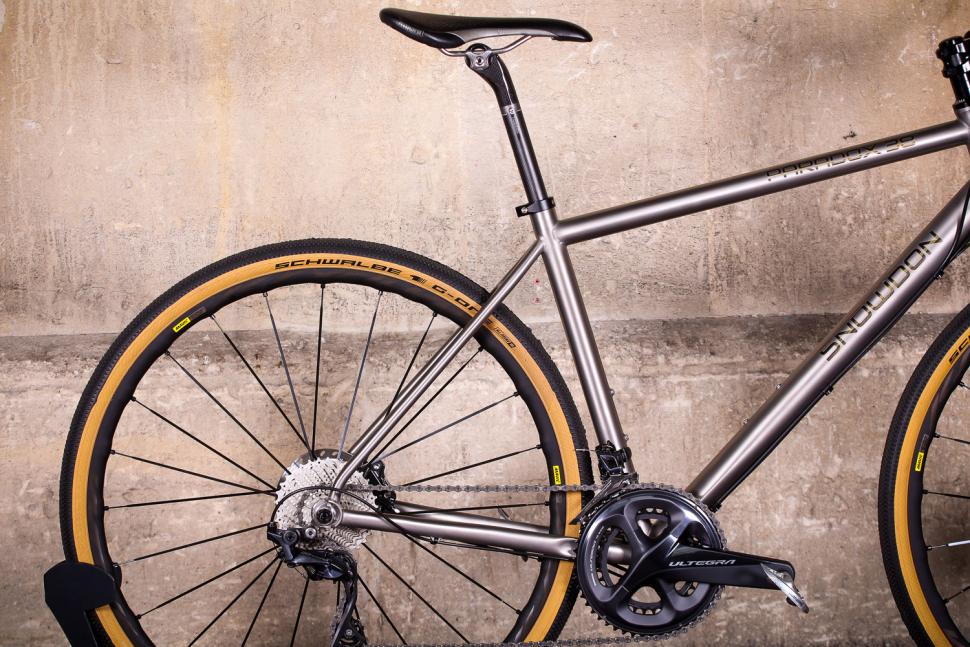 The down tube is bi-ovalised, almost pointed, standing upright at the top end to give a large weld area with the head tube, gradually leaning on to its side to extend across almost the full width of the bottom bracket. The sloping top tube means that you'll almost certainly have a lot of the slim (27.2mm diameter) seatpost extending out of the frame (I had even more than usual because I'm long in the leg and relatively short in the body), adding a degree of damping to the ride. The rougher the road, the more you'll appreciate that. 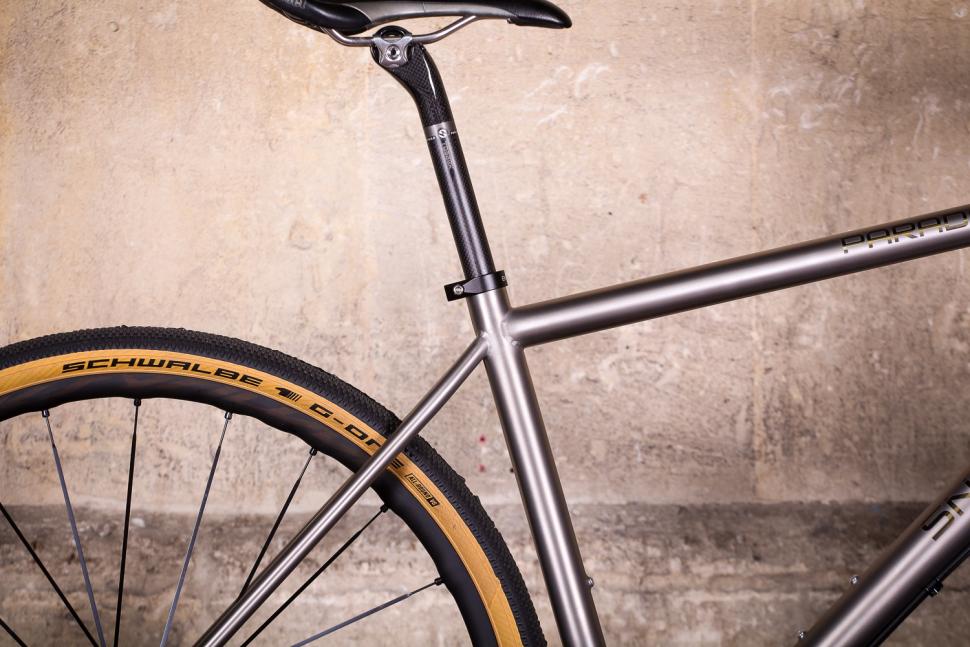 Measuring 165mm, the head tube on our large sized review bike is fairly short compared to that of most road bikes, but you obviously need to consider that there's no drop to the bar so your hands are never going to be positioned lower than the stem. Frames are made to order – hence a 60-120 day lead time – so if the standard geometry doesn't work for you it can be adjusted to your exact requirements. Custom geometry adds up to £290 to the £2,150 basic price. 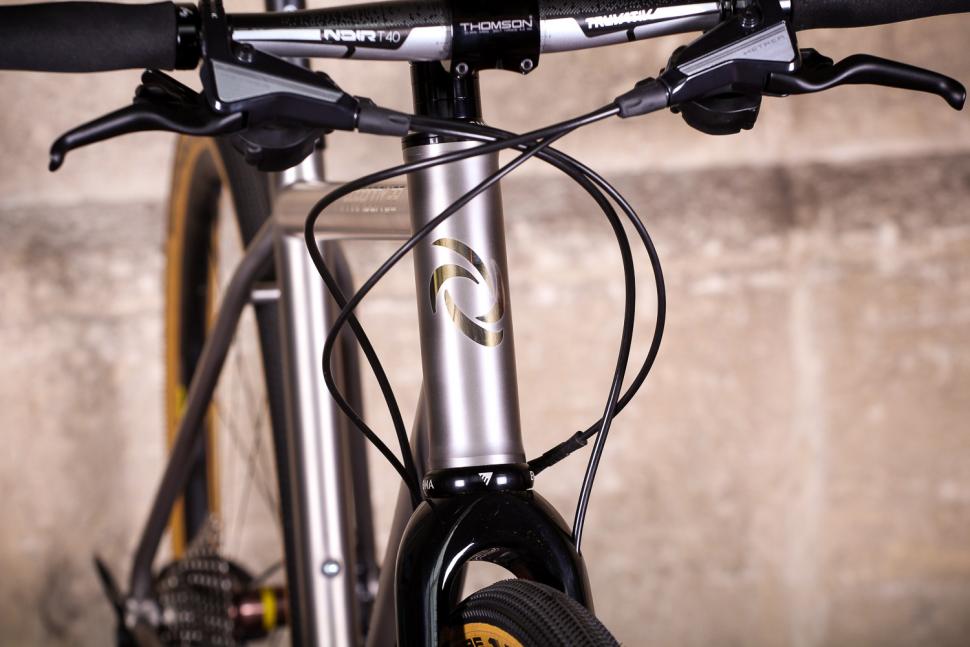 The seat angle on our review bike is 73 degrees, which is about the same as you get on most road bikes, while the head angle is a little slacker at 71.5 degrees. Snowdon can adjust that head angle to give you a slower steering response if that's what you're after. 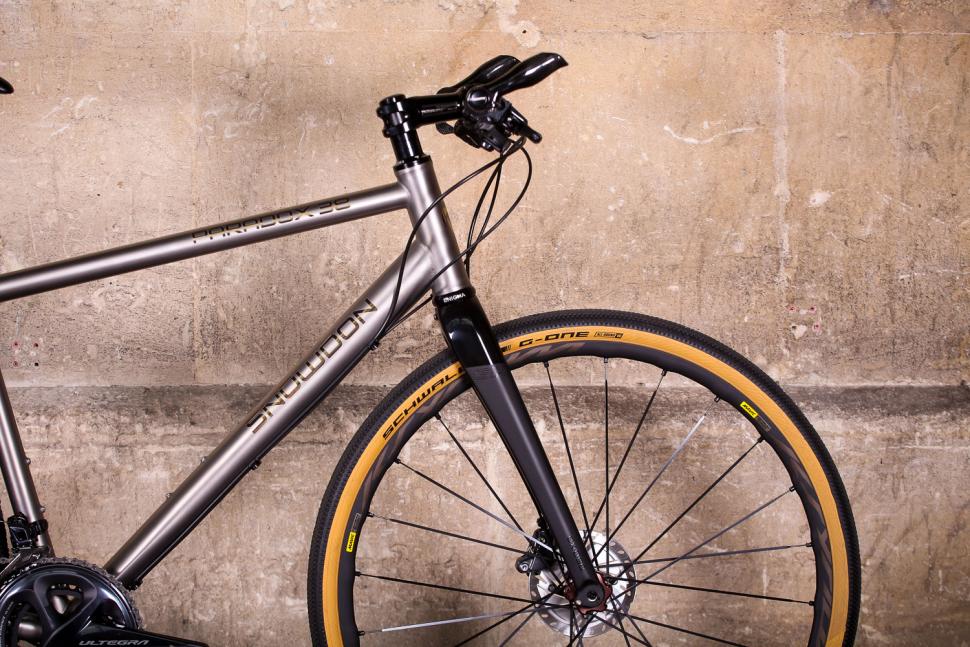 Tube diameters can be increased for heavier riders and you can decide between a rim brake frame and a disc brake version (the disc brake model we've got here is £100 extra). You can also have rack and mudguard mounts added if you like (an additional £40). You'll probably want them if you're intending to use the Paradox 38 for touring or year-round commuting. It'll be more than capable of either. I did ride it to and from work and it's a real buzz on city streets where its nippy nature again comes to the fore. Granted, the flat handlebar can be more difficult to squeeze through a tight gap than a narrower drop bar, but the extra control you get is a real boon when negotiating traffic. I'm not dissing drop bars for riding around town – I use them most of the time – but I find a flat bar easier for stop-start riding and manoeuvring at relatively slow speeds. As well as the usual flat bar hand position, you can get yourself a second option courtesy of bar ends, as fitted on our review bike. Every in-the-know mountain biker used bar ends in the early 1990s, and then riser bars came in the revolving door and bar ends spun out in the other direction. They went into a big skip with purple anodising, toe-clips and grunge, then the millennium happened and we forgot all about them. I'm out and proud as a bar end supporter, though, finding them useful both for increasing leverage when riding out of the saddle and occasionally for stretching out a bit on faster sections of road. You can make your own mind up, of course, because the Paradox 38 is sold as a frame only (Snowdon can recommend partner bike shops that can build up a frame to your specification).

> Buyer's Guide: 19 of the best gravel and adventure bikes

Overall, the Snowdon Paradox 38 is a quick, strong and comfortable gravel bike that's equally at home zipping through urban streets. A flat handlebar isn't right for everyone, but it makes a lot of sense for a lot of people and the riding they do. You get a beautifully made frame here and the option of altering the geometry and choosing between disc brakes and rim brakes will appeal to those who know exactly what they're after.

A quick, comfortable and customisable flat-bar option for everything from city streets to gravel tracks

Tell us what the frameset is for

Snowdon says, "The Paradox 38 is a flat bar gravel bike. It uses larger gauge titanium tubing [than the Snowdon Paradox 28 flat bar road bike] to increase strength and rigidity and can take larger tyres (38mm on 700c or a whopping 50mm on 650b wheels). It's a fast go-anywhere bike that makes cycling a dynamic and rewarding experience. With it you can break free and take off into the wilderness on any dirt track. But it's also great around town and its strength makes it ideal for touring. It's a bike that will take you where you want to go."

The frame is made from 3Al-2.5V titanium with mitred joints.

The workmanship is exceptionally good throughout.

We had the size large with these dimensions:

The frame reach (the horizontal distance from the bottom bracket to the top of the head tube) is longer than on a similarly sized bike designed for drop bars, in order to produce a similar-ish position with a flat bar. I got on well with the riding position, finding it ready for action without being overly aggressive.

This is one of the best things about the Paradox 38. You get plenty of comfort through the 27.2mm seatpost, a wide bar and, most significantly, the ability to fit wide tyres.

You're probably not going to contest a sprint finish on a bike like this, but it feels stiff when you lay down the power.

Would you consider buying the bike? Yes, especially if I wanted a custom geometry.

Would you recommend the bike to a friend? Yes, as above.

Upwards of £2,000 is clearly a lot to spend on a frame, but if you have the cash and you know exactly what you want, this is a great bike and it comes with a lifetime warranty. 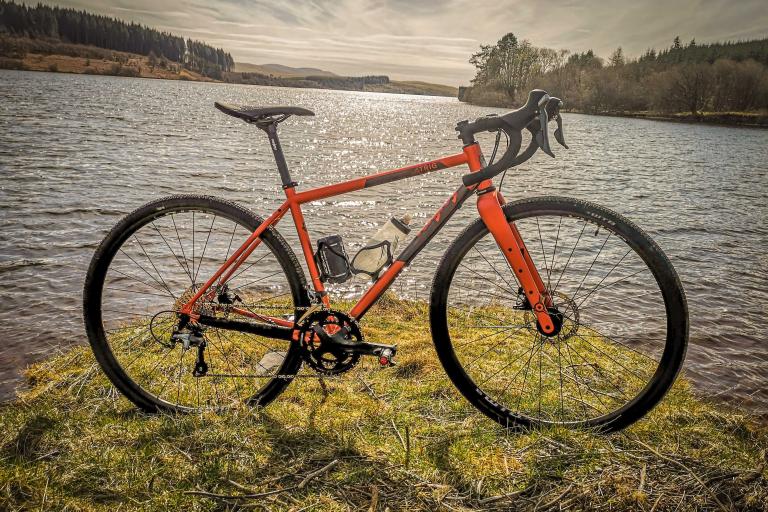 A seriously fun and adaptable gravel, adventure or touring bike 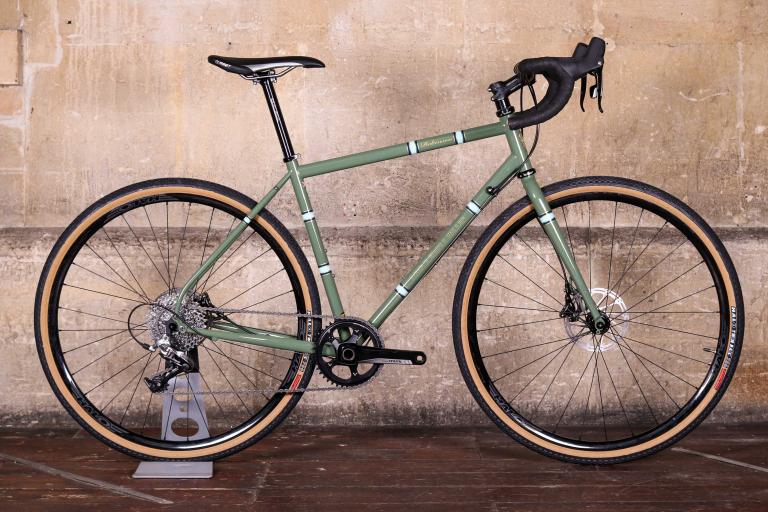 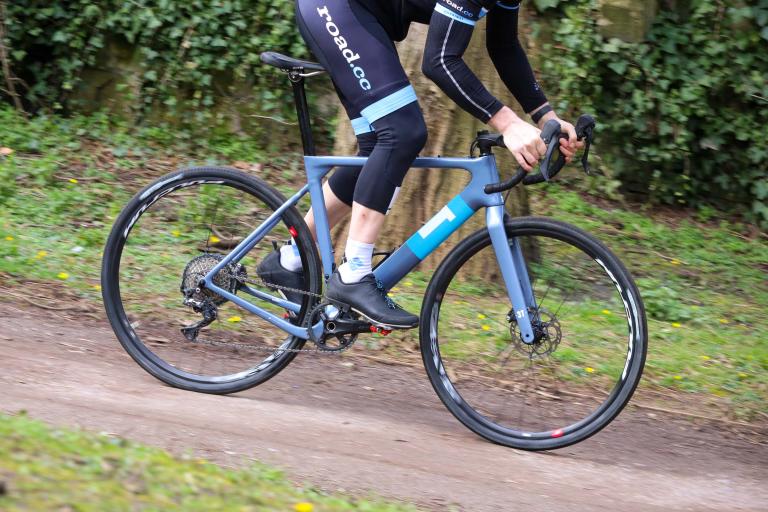