Back to REVIEWS
review
Lights - sets

5
10
Some potential merit for trailers and tagalongs but expensive, heavy and of limited use
Weight:
466g
Contact:
www.blinkers.bike

The Blinkers Blinker Set is an integrated lighting and indicator system which operates using wireless technology. It's certainly well made, using high quality materials, and may have some potential for disabled riders, utility biased e-bikes or indeed a velomobile – instances where an additional 460g isn't going to upset the apple cart – but it is expensive.

I wasn't expecting too much from a unit boasting 100 lumens, but it seemed comparable with some 200-lumen torch type lights. This kind of firepower is fine for commuting through town and tackling shared use paths and so on, with visibility in steady to around 50-60 metres. 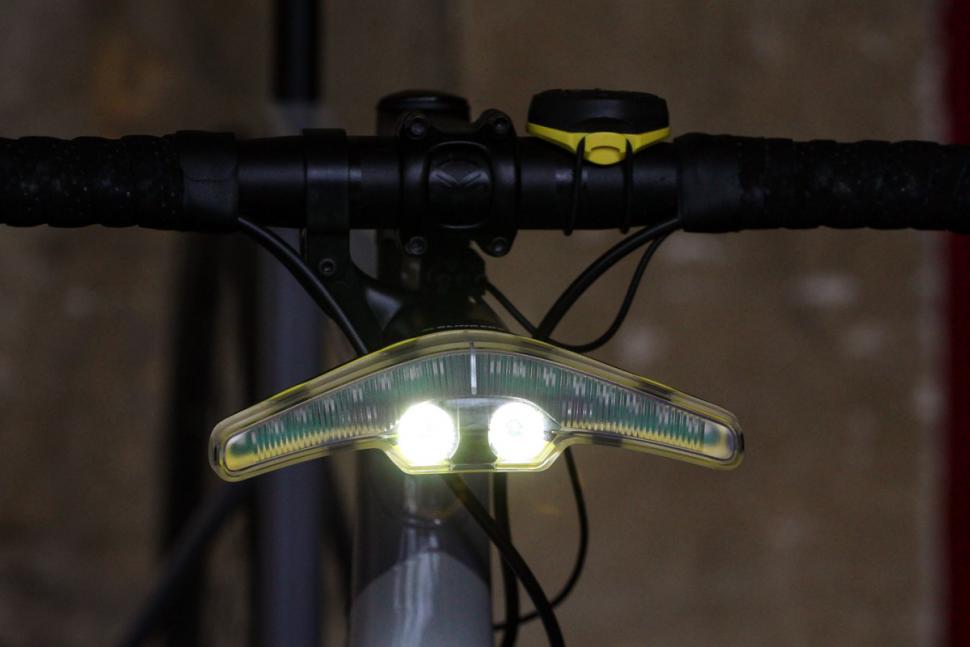 The lenses are made from a high-quality glass and employ collimator technology to make the very best of the LEDs. I'm told the two Cree diodes are 'car quality' and all are soldered directly to the PCB. This may explain why the output is much better than 100 lumens would suggest.

By contrast the 30-lumen rear is relatively retina tickling, especially at close quarters, thanks in part to the braking light (100 lumens). This isn't particularly progressive and only really bites when braking hard, but when engaged it packs a punch. 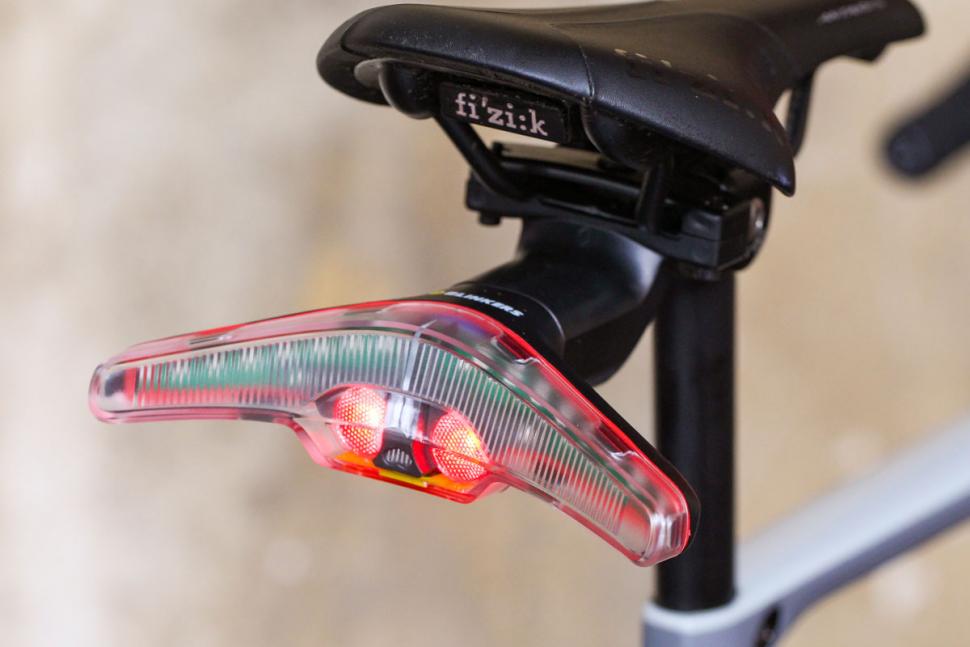 Flashing has the edge both in terms of extroversion and frugality. At a conservative estimate, it's visible to around 80 metres through the concrete jungle, maybe 120 at dusk and along open roads.

Blinkers says signal strength is good for 10 metres, which should permit service on touring/utility trailers, which aren't so well catered for in terms of lighting. Often I've emerged from a side road, lit up like the proverbial Christmas tree, and traffic has spotted me but been blind to my trailer despite two blinkies on the rear rails.

Friends reckoned I remained on the radar to around 40 or 50 metres with the Blinkers fitted to my trailer.

These were brighter than I was expecting and reminiscent of those that pulse on prestigious German cars, which probably explains why I was more conspicuous than expected.

Engaging the button sees the signals pulse for 12 seconds before cancelling. This is less than ideal when, say, tackling a major roundabout, but can be overridden by depressing the switch continuously then pressing again to cancel. And, credit where it's due, other traffic did seem to pay me more attention. 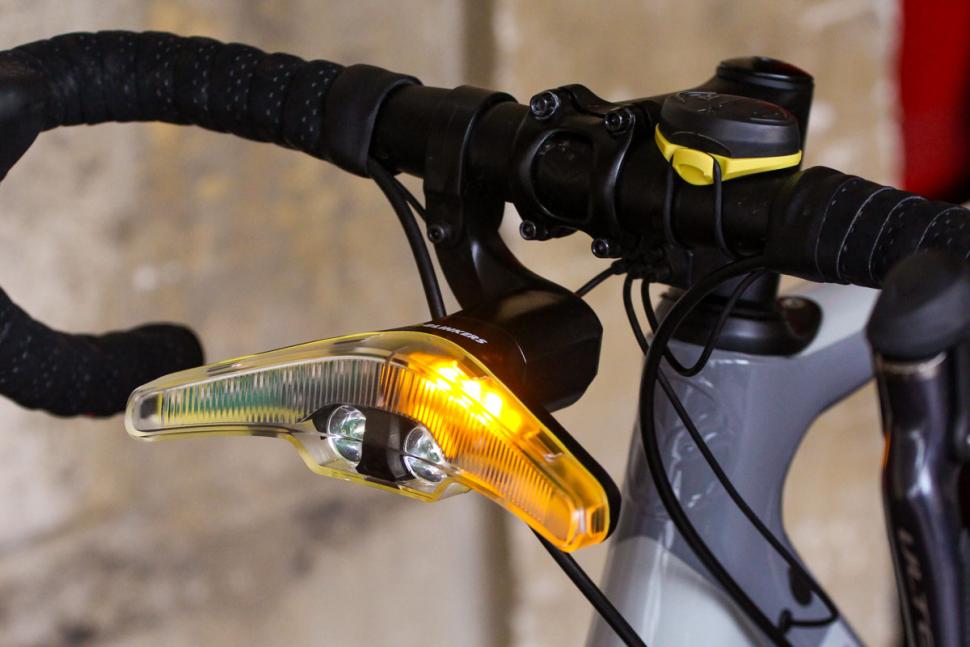 There is also a laser function, emitting a blue-green arc of light, not for zapping errant drivers but for 'announcing' your approach to other traffic and pedestrians. It's not a new concept: Blaze, now called Beryl, makes a Laserlight that projects a bicycle symbol. It lasts 10 minutes before powering off.

In terms of build quality, the composite shells and lenses feel super-sturdy, although much of the 460g weight is attributable to the magnetic couplers which connect the bracket and lights, allowing them to be whipped off when parking in the street and charging. 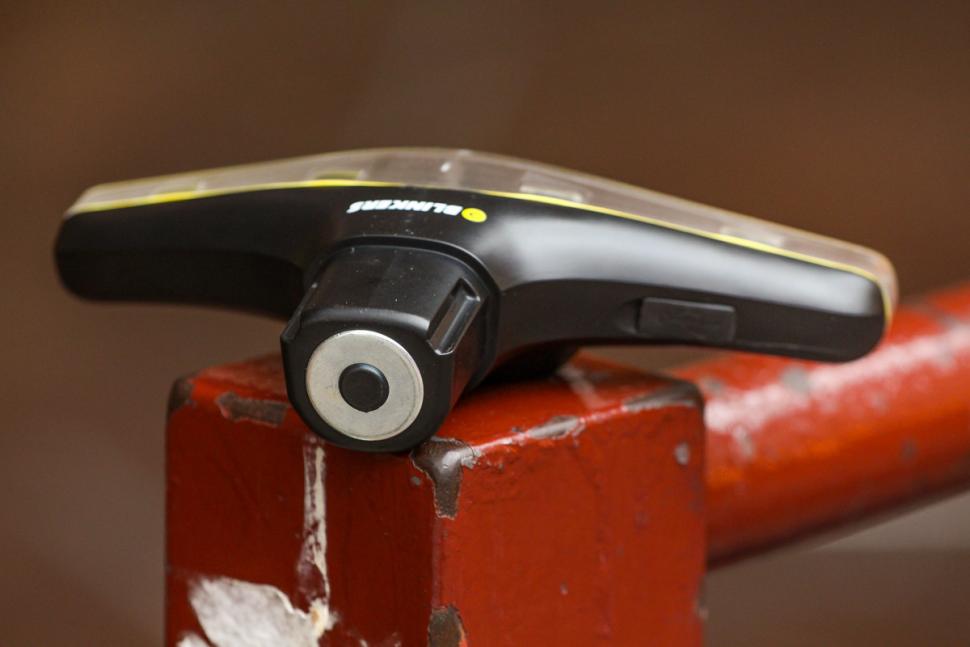 Compliant to IP64 in terms of weatherproofing (Blinkers says rain and snow), they genuinely seem well sealed from the elements. The charge port covers fit snugly and there's been no hint of water/ingress when I've subjected them to my garden hose torture test. 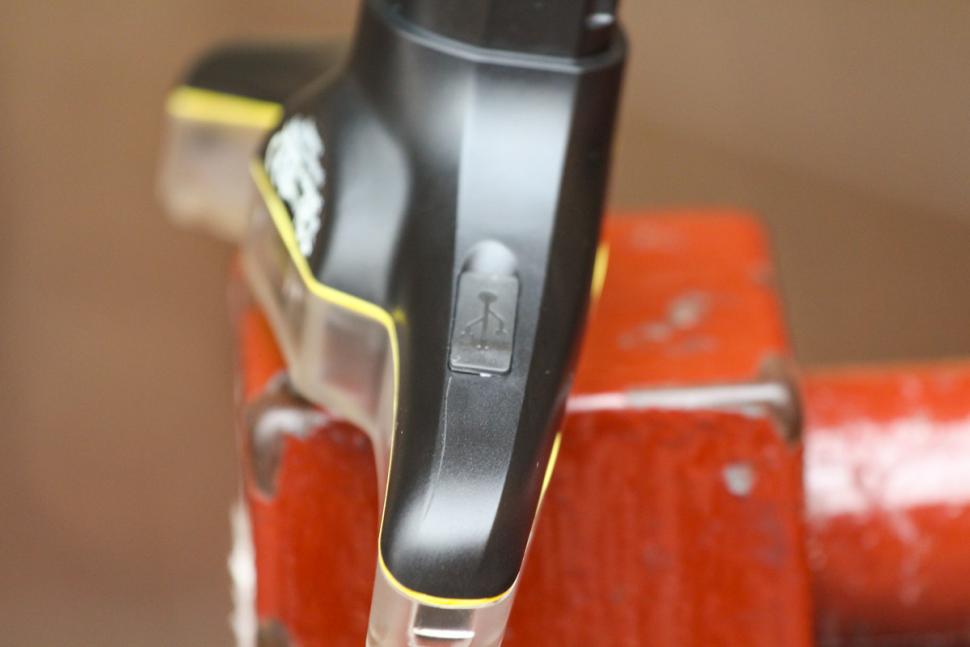 The lamps are powered by lithium-ion cells. They're easily charged via more powerful micro USB cables, such as those belonging to bigger tablets. When fully depleted, bargain on two hours from the mains. While not user-serviceable, the batteries can be replaced by the factory.

The lights are commanded from the bar by a thumb-friendly master switch, which is powered by a CR2032 cell hidden behind a very snug-fitting rubber cover. The switch fits securely to the full zodiac of handlebar diameters via the familiar 'doughnut' rubber ring. It's sensibly proportioned, given the duties demanded of it. The rubbery top cap felt a little weird initially, but the switches don't feel remote even in full finger gloves. 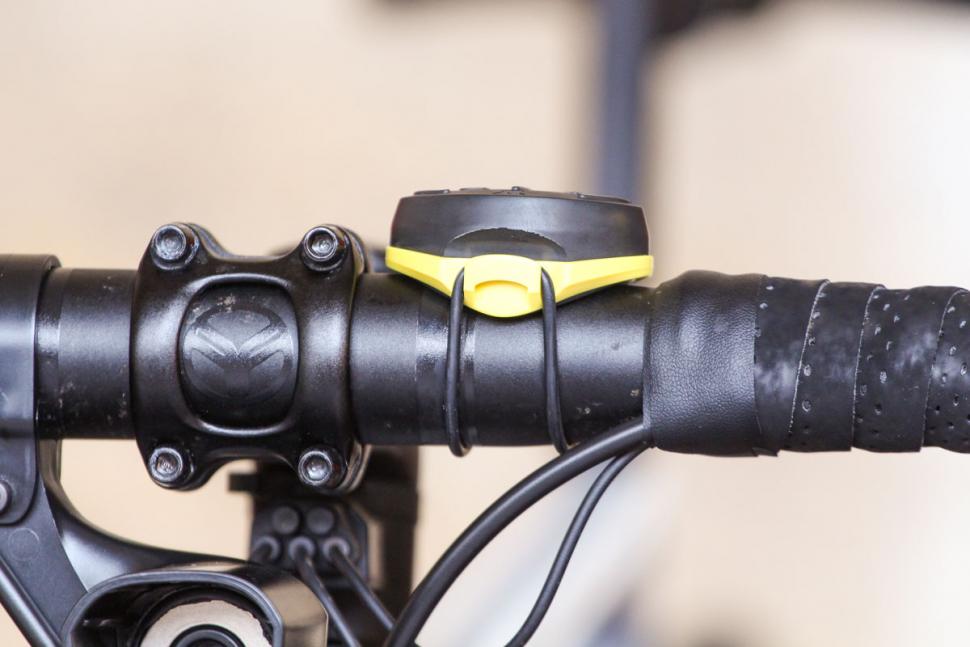 Both lights have to be paired to the switchgear before they'll work. Basically, with both lights fully charged and starting with the rear, depress top and bottom buttons simultaneously for three seconds until the left and right indicator windows glow yellow. Now bring the rear light close to the switch and wait until the lowest light turns green. Same process for the front, only the top light will glow red. Pairing is complete when all the switch's lights start blinking in unison.

The mounts are generally substantial but with relatively few parts, so come together neatly enough and without feeling 'whippy'. 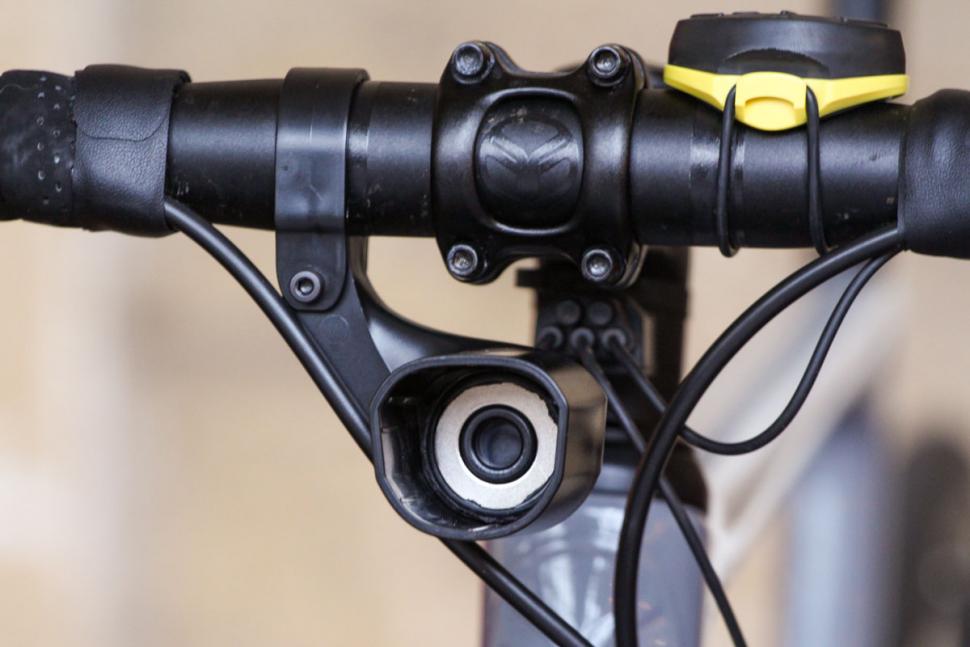 Saddle rail mounting is the default for the rear, although there is a rack-compatible version available. This would be my preferred option and one I'd like to see included in the package. 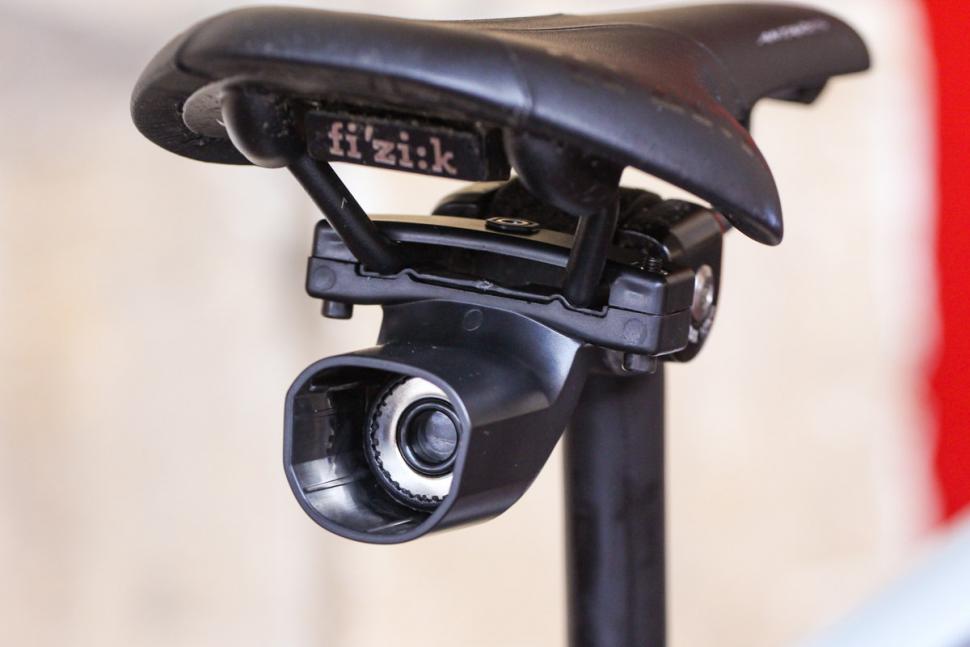 While I can see some mileage in the rear unit when coupled to a trailer, which can often be missed by drivers who may spot a solo but aren't looking for a trailer/tagalong, I'm still not convinced that turn signals are practical on traditional solo bicycles, or that they have any significant effect on vulnerable road users being respected.

> Buyer's Guide: 15 of the best rear lights for cycling

The Blinker Set is well made, and the lighting/braking functions are more effective than I was expecting, but it's still expensive and relatively hefty. Commuters or utility riders looking for this kind of technology might be better served by something like the Winkku mirror and indicator combo.

Some potential merit for trailers and tagalongs but expensive, heavy and of limited use

Tell us what the light set is for and who it's aimed at. What do the manufacturers say about it? How does that compare to your own feelings about it?

Blinkers says, "We want to improve safety on bikes, by building the next generation of bike lights. It's not about making them more powerful, but about adding extra safety functionalities like turning indicators, a brake light and a laser projection.

"Blinkers is the one thing that was missing for cyclists to be safer and to be a natural part of the road. It packs everything you need to be seen, understood and respected by everyone else in the road. Designed by Sapetti".

My feelings are that it's well made and lighting/braking functions more effective than I was expecting, especially the rear brake light function and with a trailer on tow. However, These are still expensive, relatively hefty and I disagree that indicators are key to cyclists, or other vulnerable road users being respected.

You don't want to charge your battery everyday? Every two days? Or even every week? No problem! Blinkers has a very powerful battery with a capacity of 3200mAh which will allow you to use it for as long as 2 weeks in a normal usage (2h riding per day).

Solid, high quality materials. Superior in this respect to many other indicator type systems.

Rate the light set for design and ease of use. How simple were the lights to use?
6/10

Simple enough to use. Getting them to calibrate and sync with the wireless switch proved trickier. However, communication between the units has been generally very reliable.

Both are very solid, helped in no small part by the integrated magnets, which are very strong and hold the lights securely.

Good, and no less than I'd expect.

Frugal and relatively swift to recharge.

Better than I was expecting, especially in flashing modes and in better lit areas. Flashing seems quite effective during overcast days and around dusk. Rear braking function is very intense, usefully so and at close quarters.

All components seem very solid and though the batteries are not user replaceable, they can be replaced, which bodes well for longevity.

Price may reflect the standards of materials and construction, but they remain expensive relative to other options.

Overall, the lighting function was much better than I was expecting and the numbers might suggest, particularly the rear brake function and when towing a low-slung trailer. The indicators also drew attention, to a degree, though how much of this was down to novelty is hard to say.

Some functions were more effective than I was expecting, especially when trailer towing, where a well-lit solo is usually spotted but the trailer can fall into stealth mode.

Comparable with wearable tech, such as this £165 Port Designs Go LED rucksack, but expensive compared with similar(ish) ideas such as the Winkuu mirror and indicator combo.

Did you enjoy using the lights? They're interesting.

Would you consider buying the lights? No

Would you recommend the lights to a friend? No, there are considerably cheaper and lighter options.

The system is very well constructed (much better than other combination systems) I've used in the past, and features such as the braking light and size could translate into a really useful rear light for trailers/tagalongs, so I can see some potential for utilitarian e-bikes and riders with impairments. For such use it would score higher, but for the very high price tag and weight.

Loaded with features, light and small, but with less-than-stellar output, this is a good about-town-slowly lightset

Unless you need a powerful front beam for riding at night, this light set is a very good option