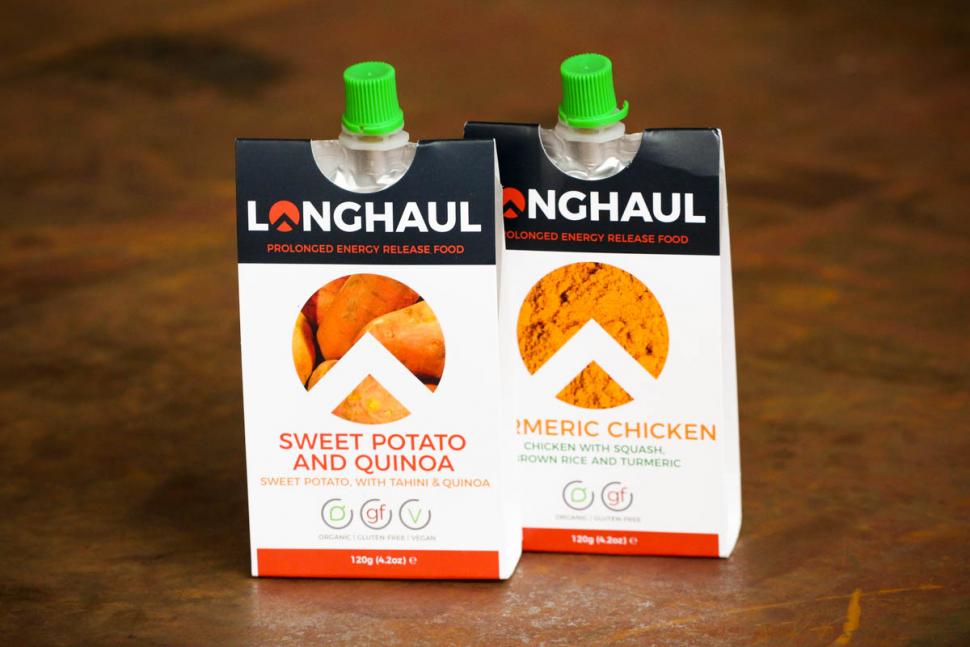 7
10
Handy pouches of slow-release energy from real food, but the flavours won't be for everyone
Weight:
720g
Contact:
longhaulendurance.com
How we test

"Drop the sugar and perform better with real food," says the manufacturer of Longhaul Prolonged Energy Release Food. Longhaul is a savoury alternative to energy gels supplied in squeezy pouches that can slip into a jersey pocket. They provide between 170 and 200 calories of slow-release energy. They avoid sugar spikes and might be good on long events when your palate gets tired of sweet things. But do try them before a race, as the flavours are unusual and aren't going to be for everyone.

There are lots of reasons to want to avoid sugary foods on a long ride. While squeezy energy gels are great for convenience and for making it easy to know how many calories you're consuming, some people want alternatives to traditional gels – perhaps because they prefer the idea of eating 'real' food, perhaps because they want to avoid the energy roller-coaster that can come with eating pure sugar, or perhaps because they just don't have a sweet tooth. It's also common to lose interest in sweet foods late in long endurance events. So there's definitely a whole load of reasons why you might want a savoury gel for performance cycling.

'Savoury gel' was clearly the design brief for Longhaul prolonged release energy food. Like a gel, it comes in a squeezy pouch that can slip into a jersey pocket easily. The 120g pouches are about twice the size of most gels, though, and between the pouch body, the lid and the inbuilt spout, that's quite a lot of single-use plastic being thrown away after each snack. The lid can be replaced on the packet when it's partially empty, which makes it possible to ration out the dose over time.

The ingredients are notably different from most gels. Gone are the maltodextrose and fructose and in come appetising-sounding real foods like dates, quinoa, coconut oil, carrots and honey.

I tested two varieties of Longhaul, which varied a little in composition. A pouch of Turmeric Chicken flavour had around 170 calories of energy, 14g of carbohydrate and 8g of protein. A pouch of Sweet Potato and Quinoa had around 200 calories, 17.5g of carbs and 4g of protein.

I took three pouches of Longhaul out on a long training ride. About an hour and a half into the ride, I started to eat the pouches at the rate of one per hour – eating each of them in two 'meals' half an hour apart. The replaceable lid made it quite easy to pop half a pouch back into my pocket.

> How to eat right for long rides and sportives

Out riding, it was clear that the energy from this food had none of the sugar spikes (and subsequent crashes) that you can get from using traditional energy gels. Instead, as intended, I experienced a nice, constant supply of energy that kept me powering along quite happily. The performance as an endurance food is pretty much exactly what you'd want.

The pouch made eating really easy and convenient, and the replaceable lid meant that putting the finished pouches back into my pockets left me with none of the sticky mess all over my clothes that sugary gels can lead to.

So the energy-release performance of Longhaul was nice. What I found more difficult to deal with were the flavours. Now, obviously, this is going to be a very personal issue, and your mileage might vary a lot from mine, but I really found the flavours quite a long way from my tastes.

The gels I took on my first ride were the Sweet Potato and Quinoa flavour and the best way I can describe the flavour is that it is arrestingly – almost shockingly – savoury. Large amounts of turmeric and tahini dominate the taste such that, despite the gel being 59 per cent sweet potato, the other ingredients mask every hint of sweetness and you have to concentrate quite hard to detect any of the usual potato flavour. I think it is the most avowedly savoury thing I have ever tasted.

Worried that my personal preferences might be biasing things here, I later passed one of these gels around a group of friends – including a professional chef. All were somewhat startled by the flavour and all agreed they struggled with it.

I later tried the Turmeric Chicken flavour and found this somewhat better than the Sweet Potato. The carrot and honey cut through in this variety and I found it a lot easier to eat. But still, this variety remains unapologetically savoury and I'd recommend you try either of these before relying on it in a race setting – it'd be a shame to find yourself with something you find hard to eat when you need the energy.

Now don't get me wrong: I suspect some people will love both of these. And it's possible I was partly thrown off by the psychological disconnect of tasting something so very savoury from the sort of pouch that normally delivers sweet flavours in a cycling context. Just be aware that these are (probably) not the sort of gels you've tried before, but if you lack a sweet tooth yet crave the on-the-go convenience of gels, Longhaul might just be what you've been looking for.

Handy pouches of slow-release energy from real food, but the flavours won't be for everyone

Longhaul writes: "Real food provides sustained energy, a natural nutritional mix, and, quite frankly, tastes much better. To provide you with a fuel that enables you to perform at your best we make our sports food according to these principles:

The sweet potato is a medium glycaemic load carbohydrate that releases energy in a steady, sustained manner. The high soluble fibre content ensures it is gentle on the gut while you are being brutal to your body. And it is packed with potassium, the essential electrolyte for regulating water balance to prevent dehydration and muscular cramp.

Quinoa is a 'complete' plant-based protein as it contains all nine essential amino acids. The addition of protein to a carbohydrate fuel slows down the rate at which the carbohydrates are broken down into simple sugar. In turn, this leads to a more regulated supply of energy to the blood stream.

Sesame seeds pack a lot of energy in a small package. With 89 calories per tablespoon, 60 per cent of which come from fat, these little seeds really are the perfect prolonged energy release food.

Also loaded with: magnesium, calcium, phosphorus, copper, iron, vitamins B1 and B6.

Turmeric can help to help protect and repair the body from damage caused by endurance sport [3]. It contains an abundance of curcumin, a powerful antioxidant and natural anti-inflammatory. And if that is not enough, turmeric also increases serotonin and dopamine, two neurotransmitters associated with happiness!

Sea salt is nature's most potent electrolyte, and is every endurance athlete's best friend. The mineral diversity of salt helps the body regulate water retention, maintain hydration and stave off cramp, even in extreme conditions. So we add a good pinch!

A little black pepper can make a big difference. It contains a natural substance called perperine, which increases the availability of nutrients from other food sources. A sprinkle of black pepper to your turmeric increases the absorption [4] of curcumin by a whopping 2000 per cent!

Coconut oil contains Medium Chain Triglycerides (MCT). Unlike their longer and shorter chained cousins, MCTs can be transported directly from the gut to the liver where they are metabolised to become an easily accessible source of energy for your muscles.

It seems to provide a consistent, steady supply of energy that kept me riding along nicely on long rides.

At £2.99 a pouch (slightly less if you buy them in bulk), it's not a cheap way to buy 170-200 calories, though it works out about the same as Sponser's Liquid Energy Salty (see below).

It provided a nice, sustained energy hit that kept me riding steadily without trouble.

I've never tried another product quite like this so lack comparators. It's a savoury alternative to energy gels, but there aren't many of those. There are savoury snack bars such as those made with seeds by 9bar, but I've not encountered a totally savoury squeezy gel before. Years ago, David Else tested some savoury Sponser gels and those are still available for around £1.40 per 35g sachet.

Would you recommend the product to a friend? I'd get them to try it first...

This does its intended task well – there's a good, steady supply of energy over a long period. But the flavours are quite startling and won't be for everyone.

I usually ride: Cannondale Synapse  My best bike is: Whyte Wessex One

A research psychologist by day, Ian spends quite a lot of time on bikes, particularly commuting between Bristol and Bath or doing audax rides. For years he was an ultradistance runner, but this came to an end when he realised getting back onto a bicycle offered the chance to race over much more preposterous distances. In recent years he has ridden in the Transcontinental Race, the TransWales and the North Cape 4000. He has even finished first in some of these.