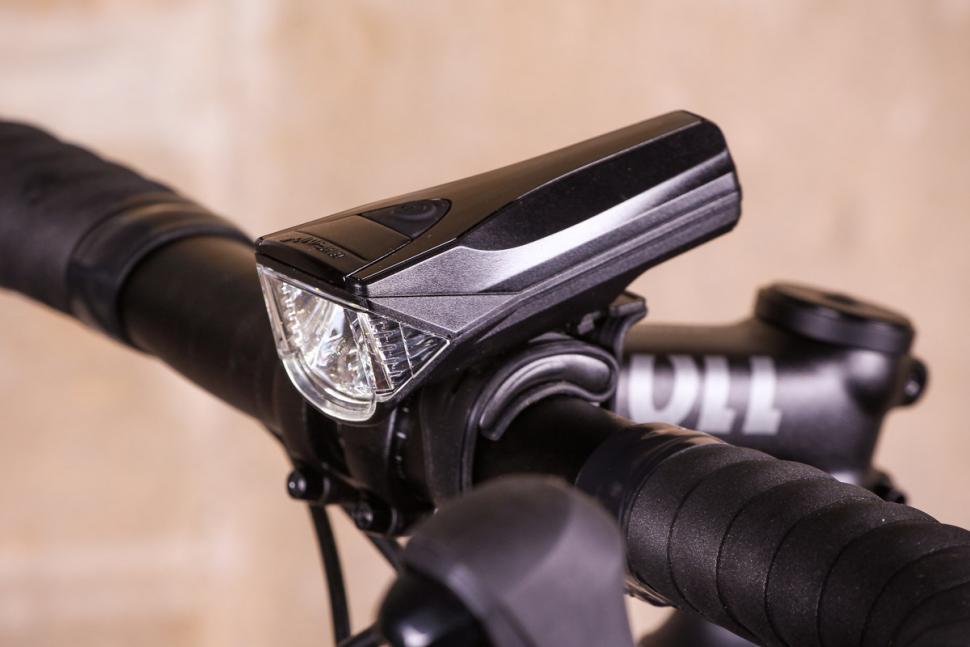 7
10
Effective and 'considerate' beam is excellent, but it's let down by a hard-to-operate switch
Weight:
105g
Contact:
www.freewheel.co.uk

The Infini Saturn 300 provides a bright beam with decent run-times and a good battery capacity indication system. Although it has a very welcome 'no dazzle' beam design, the difficult-to-operate switch and a slightly unstable mount detract from what is an otherwise very good unit.

The main polycarbonate case of the Saturn 300 is designed for both front and lateral visibility. A specially shaped lens cuts off the frontal beam's visibility in a line ahead of the rider, meaning that anyone facing the light will not get dazzled. These kind of lenses are obligatory in Germany, and it's great to see Infini bringing them to the UK market.

Despite the case not feeling the sturdiest, it stood up to several 1m drop tests. Similarly, although it 'only' has a waterproof rating of IPX4, meaning it should 'resist water splashes from any direction', it stood up to storm Diana and handled a five-minute power shower too.

The lithium-ion battery recharges in a claimed 3 hours via a (rather short) supplied Micro-USB cable. The switch glows green when the battery capacity is 100-50%, amber for 49-25% and red for below 25%.

Its maximum output of 300 lumens in Super Bright gives out a strong beam that's good enough to light the way on an unlit road at steady speeds (less than 17mph). It took me a while to get used to the concentrated beam that the Saturn gives off. If you look at it on the comparison engine against, for example, the recently tested Blackburn Dayblazer 400, you can see what I mean. I frequently found myself making micro adjustments to the Saturn's position to light up what I knew were my daily pothole encounters. There is certainly an optimum position for the light.

With that narrow beam, peripheral lighting isn't great; the Saturn is a no-no for riding towpaths, gravel tracks or unfamiliar lanes. Because the beam is concentrated in a line it's plenty bright, just not over the area that you might be used to.

It got me seen on straight roads by oncoming traffic at around 200m, which isn't bad for a 'cheaper light'. I have been consistently getting over the claimed 3 hours out of this mode, too.

Boost mode offers sufficient light to navigate semi-lit roads. It's not a massive drop down from the Super Bright in terms of seeing or being seen. It's perfect for use in semi-lit areas. It also runs for over the claimed 6 hours in this mode.

The lowest constant mode is for being seen rather than seeing with; it isn't bright enough to ride confidently at a decent pace on unlit roads, it's more a 'knock-about-town' mode. This was the only mode that failed to last the claimed time – I got 17 hours from it, an hour off the claimed 18.

In short, I relied heavily on the Super Bright mode. With only a 30-minute commute, I wasn't having to charge it excessively and, even better, I was happy that I wasn't blinding any other road users, so I was able to complete my mix of rural and urban commute without switching modes.

If the beam took some getting used to, I struggled beyond measure with the switch. Sorry Infini, but while the rubber-coated button might be deemed 'tactile' by some, I didn't find it easy to operate with gloves on. It needs a long press (1.5 seconds, though it felt longer) to switch it on and off, and a single press to cycle through the modes. It is very stiff and the only way I could locate it easily and sense the necessary click that activates the light was by going without gloves. A real let-down on an otherwise very good light.

The battery indicator I mentioned above is clear and accurate, and in case these indicators aren't enough, when it hits 25% remaining, the LED will begin to intermittently flash if it is in a constant mode, and begin to cycle with a prolonged phase if it's in flashing mode. This is useful if you choose to mount the light on your helmet (possible but not ideal), or you're colour blind.

The mount is a simple silicone strip that wraps round a bracket. It is tool-free and idiot-proof, so easy to move from bike to bike. I found that I needed to over-tighten the strap in order to eliminate vibrations that caused significant movement and consequently a 'wobbly beam', exacerbated by how concentrated it is. Even with the strap at its tightest point there was still a small amount of beam-wobble on rough roads. It's the compromise of a bracket that has play to allow for its rotational feature.

As I mentioned, I frequently made use of the rotating bracket to get an optimum position. It swings out of the way easily to mount other devices and I also found myself turning it 180 degrees to provide light for my pannier packing at night.

Although the whole thing looks and feels quite cheap, it functions perfectly well and the lever mechanism is surprisingly secure. I've had it on a variety of bars and the strap has plenty of positions for any width.

The light also slides off the bracket easily if you depress a small lever.

Price-wise it's not hugely expensive compared with others out there: it's £1 less than Kryptonite's Street F-300, and £1 more than Blackburn's DayBlazer 400, which offers better peripheral lighting and a better switch.

It might take some getting used to the beam, but the Saturn 300 isn't a bad choice if your regular commute means navigating urban areas as well as unlit roads. It packs a punch, it's just a shame about the difficult-to-operate switch.

Effective and 'considerate' beam is excellent, but it's let down by a hard-to-operate switch

Infini says, "Often being seen is as important as seeing the road ahead. The SATURN 300 I-330P bicycle headlight achieves just that by projecting a safe, clear and long running 300 lumens of output. Additionally, the beam of the SATURN 300 has been tuned to truncate in a precise line in front of the rider to maximize visibility while minimizing any blinding of an observer. The result is a light that is safer and more efficient than standard lights in this category. USB rechargeable and with 5 modes of operation, the SATURN 300 is an ideal balance between safety, efficiency and performance.

'The SATURN 300 I-330P is housed in a polycarbonate main case designed for both front and lateral visibility. A specially shaped lens cuts off the frontal beam's visibility in a line ahead of the rider to be as safe for viewers as it is for the rider. Rubber coated buttons are tactile and can easily be operated with gloved fingers while the battery indicators are intuitive and informative.'

Feels pretty cheap but it's stood up to several 1m drop tests and a power shower.

Rate the light for design and ease of use. How simple was the light to use?
4/10

Very hard to switch on and off. The button needs to be pressed for 1.5 seconds to turn it on/off and it's stiff. Also, although the button looks substantial in terms of size, it actually only responds if you press it at a particular point. All very awkward in a decent winter glove.

Quick and easy to switch between bikes but needs to be overtightened to be effective.

Stood up well to Storm Diana! It's only rated IPX4 but this has proved good enough.

All run-times were somewhat over the claimed ones except the low constant, which was a claimed 18 hours and I only got 17 out of it. Charge time was 3 hours as claimed.

Pretty powerful but a narrower beam than I'm used to. It's good to know that the light isn't blinding other riders or drivers.

It's not overly expensive for a light that packs quite a punch, but the switch detracts somewhat.

It definitely gets you seen and is strong enough to see with.

Powerful beam from a light that won't break the bank and won't blind others.

Kryptonite's Street F-300 front light is £1 more, while the Blackburn DayBlazer 400 is £1 less, and for 1p more you could have the Niterider Swift 500. It's nearly a tenth of the price of the Exposure Strada SB...

Did you enjoy using the light? Once I'd got it on, yes.

Would you consider buying the light? No, sadly not.

Would you recommend the light to a friend? If they rarely wear gloves, maybe!

Great beam technology, but a shame it's been combined with a poorly designed switch. I really the light itself but this switch needs sorting out.

I usually ride: Road  My best bike is: Carbon road

I regularly do the following types of riding: commuting, touring, club rides, general fitness riding, getting to grips with off-roading too!

Small, lightweight and very easy to use – though it could be cheaper

A compact, bright and brilliant front light that excels on the road